Oldham, United Kingdom – “I was shocked when I first saw the results and within minutes I was in tears; ‘Oh what have we, the British, done?’ I still can’t believe the results.”

Najma Khalid, a British Asian woman from Oldham in the northwest of England, pieces together her reaction following the announcement that Britons had voted in favour of leaving the European Union.

“The results came out on Thursday, and on Friday I was waiting near my daughter’s school to pick her up. A car full of men slowed down, rolled down the window and shouted ‘Paki go home’.

“The following week a car pulled up with what seemed like a family inside. The man threw a portion of chips at me and shouted ‘Hey Paki, open your fast’. I almost ran.”

In the days following the Brexit result, the country saw a spike in racially motivated incidents, and British police reported a fivefold increase in reports of race-hate crimes.

The EU referendum appears to have exposed divides in British society, but for the residents of Oldham, where about 65 percent of the population voted to leave, that divide has long been apparent.

“There have always been issues in Oldham; hence the race riots previously,” says Najma, refering to the Oldham Riots of 2001, a series of violent clashes between the town’s white and Asian residents.

But, she adds: “Islamophobia and xenophobia will increase as people will have no fear about being openly racist.”

Najma is no stranger to such sentiments. As a British woman of Pakistani heritage and a working single mother of two, Najma has long had to fight – whether against prejudice or simply to get by.

She recalls how her marriage broke down and her husband disappeared when she was pregnant with her second child. Najma was left unemployed and with two young children to care for.

“It was a very hard time. Me and my two kids were left penniless,” she says.

There was a stigma attached to being a divorced Muslim mother, she explains. But she was determined to get by and to support her children. So she researched the services and benefits available to her and managed to find work.

In the years since, she says many other local British Asian women have approached her for advice. That was what inspired her to start the CHAI (Care, Help and Inspire) Project, a weekly support group for women from the black, Asian, and minority ethnic community in Oldham.

The group meet once a week in a primary school to drink chai and discuss their lives while offering mutual support and solidarity.

Alongside educational workshops and lectures, the group also take part in community awareness and creative activities to promote greater inclusivity in Oldham. There are no set topics for the weekly discussions, she says, but Islamophobia, bullying, domestic violence, marriage, poverty, health and local cultural issues are recurring themes.

Everyone in the group says that they voted to remain in the EU, in part because they see it as working for a more inclusive European community, much as they do in their own society. Now, they are worried about what the future will hold.

And, like Najma, the other women say they’ve also felt racial tensions rise in their town.

After years of campaigning and working towards better social cohesion in Oldham, the women now have little hope for the future.

‘An open ticket to display their racism’

Farmida, one of the “Chai ladies”, as they call themselves, says: “I feel angry that after all these years together, we have yet again been divided into us and them. This hate seed may grow into a thorn bush and everyone will be affected but especially the Muslim, Polish and EU citizens, as well as the refugees.”

“We are always hearing of race incidents now,” Najma says. “Brexit seems to have given people an open ticket to display their racism. Minorities will be further isolated.”

“I feel I now have to make an effort to smile at other people on the street but I fear the response will be negative,” says Farmida. “It took us years to create a good relationship with our fellow community and in one vote, it has created more division.”

Most of the women live in Glodwick, an area largely populated by British Asians. Fifteen years after the Oldham Riots and now following the Brexit vote, some of the residents say they feel as though they’re struggling with an identity crisis.

Najma explains it: “Where do we belong? Who are we? What are we? Are we Asian? British Muslim? British Pakistani? Or just plain British?

“We want to celebrate our heritage as it has some beautiful aspects and we are not ashamed of it, but we want to be classed as British Asian as we live here. This is our country.”

Farmida says: “When I started wearing my hijab, I noticed that people either think that I am oppressed by my husband or a terrorist. If they see me with my hijab, they think I’m oppressed, if they see me without they probably think ‘Oh look, she must be well educated’. But I am the same person underneath. I don’t blame them, look at what the media says about us. I give people the benefit of the doubt.”

The Chai ladies agree that increasing the extent to which children mix between racial groups is critical to encouraging cross-cultural understanding and acceptance. But they say that the constant negative portrayal of Muslims in the media has left their own children feeling conflicted.

One of the women described a situation with her children. “My son even called my daughter a ‘Paki’. Obviously he didn’t know what it meant but he had overheard it being used and thought that it was an acceptable word.”

A message of peace and integration

Through working closely with the Oldham Coliseum Theatre, participating on stage and supporting cultural events, as well as publishing a cookbook for diabetics and others, Najma and her Chai ladies say they are promoting a message of peace, integration and solidarity in a town and country that is perceived as divided.

But they worry that the longer-term effects of Brexit may make that even harder to achieve and fear that the worst is still to come.

“If the UK economy gets strained financially after the referendum, who will take the blame?’ asks Farmida. “The immigrants,” she says, answering her own question. “But who are the immigrants?”

READ MORE: The night the UK became a little island

Another member of the group, Shagufta, says that she has been told to ‘go back home’ by people on the street. “But go back where?” she asks. “What about the second or third-generation migrants? Where will they go? Britain is a multicultural society, so what about the people with foreign heritage who have their roots here?”

“We will only know who we are when someone defines an immigrant. Otherwise I class myself as 100 percent British as I am born and bred here,” says Shabana, another member of the group. “I don’t have legal Pakistani identity. Where am I supposed to go back to?” 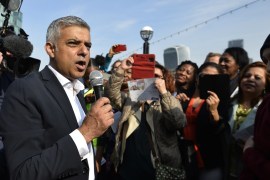 Sadiq Khan on Brexit and the backlash