Mitrovica, Kosovo – “H.I.” That was the reading Xhavit Haziri got when his blood was tested for lead levels while he was living in a contaminated camp set up by the United Nations after the war in Kosovo.

“We found out late that [at our camp] there was some kind of lead – poisonous lead – and when we measured it, we were told: ‘Hey, your [lead levels] are very high. Your results are H and I – Hi. Our device can’t measure anything higher,'” Haziri, now 36, recalls of being tested 12 years ago.

Haziri lived in Zitkovac camp, in northern Kosovo, one of the sites set up by the United Nations after some 8,000 ethnic Roma were burned out of their houses in the aftermath of the 1998-99 war with Serbia.

In the weeks and months that followed, the UN Mission in Kosovo, UNMIK, took control of the territory and governed it formally until February 2008, when Kosovo declared independence. UNMIK set up several improvised camps for the Roma. Most of them were on land contaminated by refuse from the Trepca mines, where enormous operations extracting lead, zinc and ore from the mines in the 1980s accounted for about one-quarter of Kosovo’s gross domestic product (GDP).

Several other camps set up on the outskirts of the city of Mitrovica also had high levels of lead.

Trepca mines were shut down temporarily by the UN after French peacekeepers registered high levels of lead in their blood. The organisation noted that: “Levels of atmospheric lead measured in July 1999 were around 200 times the World Health Organization’s acceptable standards.”

In 2000, the levels of lead contamination in vegetation and soil samples in Mitrovica exceeded acceptable standards by 176 times and 122 times respectively.

According to the World Health Organization (WHO), lead levels above 10 microgrammes per deciliter (mgc/dl) of blood are hazardous.

In the mid-2000s, the WHO asked Zoran Savic, a doctor at the Mitrovica Public Health Institute, to monitor blood levels.

“I was responsible to monitor some 300 children aged one to 14 years, and the results were shocking,” he says. “Of 300 children, only about 20 were below the healthy amount of 10 microgrammes per deciliter. It is rare to find levels this high in the world.”

According to the WHO, lead poisoning most acutely affects children, who absorb four to five times as much ingested lead as adults.

In October 2005, German doctor Klaus-Dietrich Runow analysed hair samples taken from Roma living in the camps and concluded that “the results obtained are reported by our laboratory to be the highest ever seen in the values of heavy metal in human hair samples … In terms of environmental medicine, the refugees will suffer irreversible damage to nerve and immune system and impairment to bone growth and blood system if prompt assistance is not forthcoming“.

Three of the camps, Cesmin Lug, Kablare and Osterode, were within 200 yards of mounds of industrial waste from the Trepca mines. Zitkovac, where Haziri was living, was near a chimney for the camp and heaps of lead refuse. Close by was another area used for the disposal of pyrite, an iron sulphide, which Haziri says blew on the camp whenever it was windy or rained.

In April, a UN human rights advisory panel concluded that the UN was negligent in placing people in the camps.

“Through its actions and omissions, UNMIK was responsible for compromising irreversibly the life, health and development potential of the complainants that were born and grew as children in the camps,” wrote the panel in its 79-page opinion.

The decision came almost eight years after 138 complainants, all Roma, who had been victims of lead poisoning, brought the case in July 2008. The panel, whose decisions are not binding, found that UNMIK owes the complainants an apology and compensation for moral and material damage.

“In the 10-plus years the Roma remained on the poisoned sites, an entire generation of Roma children was lost,” said Dianne Post, the American lawyer who brought the case, in a press release on her website.

“While the decision validates the claims of the Roma that they were discriminated against, denied due process and wrongfully harmed by the actions and inactions of UNMIK, it can in no way make up for the deaths caused by lead poisoning, for the permanent mental impairment and physical injury caused by lead exposure, and for the family and community disruption created by the living conditions of the camps.”

In response to the decision, the Special Representative to Secretary-General Ban Ki-moon issued a statement expressing “regret regarding the adverse health conditions suffered by the complainants and their families at the IDP camps” but stopped short of announcing any move to provide financial compensation.

The panel further concluded that while UNMIK knew about the contamination and high levels of lead in inhabitants’ bloodstream as early as 2002, efforts to relocate the community did not begin in earnest until 2005.

‘My son died when he was seven’

By the end of 2012, the camps had finally been closed and destroyed. A new site for a “Roma Mahalla”, or neighbourhood, was established on the other side of the Ibar River. But fewer than half of the original occupants have returned. Some have moved to other parts of Kosovo; others have migrated elsewhere in Europe.

For the Roma still living in Mitrovica, the panel’s conclusion means very little. In fact, few people in the neighbourhood even seem to have heard about it.

Fetije Sejdiu, 48, lives with 10 members of her extended family in a two-storey house in the new neighbourhood, which was built with donations from different international organisations. Her kitchen consists of an open-fire wood burning stove and a small hot water boiler on the floor. All of her family members, including the young children, spend their days salvaging plastic, glass and metal from public dumps to sell.

She says she hasn’t heard anything about the human rights panel decision because she is too busy fending for her family, who earn about 100 euros ($112) per month for their recycling work.

“My children are sick, and I myself have a heart disease and breathing problems,” says Sejdiu. “My son died when he was seven while we were living in Zitkovac. My children are poisoned by lead. Nobody took care of us.”

According to the UN panel, there were no deaths that could be solely attributed to the poisoning, though the panel said any decision on this matter was made more complicated because UNMIK did not hand over the medical documentation that was collected over the years. But lead can stay in the bloodstream for decades, and, as Dr Savic explains, gets distributed to the brain, liver, kidneys and bones. Many families say they continue to suffer its consequences: stunted growth, intellectual disabilities including reduced IQ, anaemia, and anxiety.

According to the WHO, “the neurological and behavioural effects of lead are believed to be irreversible”.

Shukreta Kajtazi says that when her oldest daughter, Medina, was tested in the Osterode camp, she registered lead levels of 40 mgc/dl. Kajtazi says Medina and another daughter, who is seven, today suffer from anxiety and have problems sleeping. The seven-year-old, she says, went into a coma when her blood levels were being tested six years ago.

Kajtazi says that in the new mahalla, the conditions are better, the food is healthier and their house is cleaner.

The advisory panel also called on UN bodies dealing with refugees and IDPs to “promote and ensure respect for international human rights standards,” and asked that the findings and recommendations of the panel be shared with these bodies “as a guarantee of non-repetition”.

Post says that the decision is precedent-setting in terms of UN accountability but that she doubts it will be implemented.

Any decision the UN takes will be made in concert with the headquarters in New York, says UNMIK spokesman Jan Malekzade, and because of the implications for other missions, finding a solution will take some time.

“There is no mechanism for compensation,” says Malekzade. “It would open up a whole different debate, and there is also no budget for this purpose. That is why we are trying to find a creative way to address the situation without going down a legalistic path.”

There is a precedent of financial compensation for personal damages. Following a decision of the human rights panel in 2015, UNMIK paid an undisclosed amount to the families of two men who were killed and others wounded when peacekeepers fired rubber bullets at them during a protest in 2007.

‘This is all poison’

While the Roma of Kosovo no longer sleep next to heaps of toxic waste, it remains a problem. Haziri spends his days with his 17-year-old son Rahim, filtering through the waste deposited at the public dump of the municipality of Zvecan, less than a mile from the Zitkovac camp where he used to live.

He works there from 7:30am until 5:30pm, culling, packaging and loading the discarded remains of other peoples’ lives into a beaten orange van.

With his foot, Haziri moves a bit of earth from the hill abutting the yard. It is refuse from Trepca mines covered with a thick layer of dirt. There’s a thin veneer of green growing on it.

“This is all poison,” he says. “But this is my only option. How else can I feed my family?” 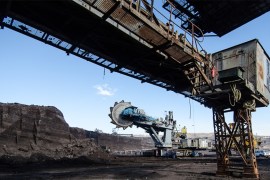 In Kosovo’s coal country, residents living in the polluting shadows of two power plants may soon contend with a third. 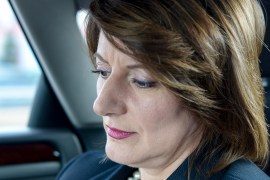 On the road with Kosovo’s first female president

An intimate portrait of Atifete Jahjaga, the 40-year-old president determined to help survivors of wartime rape.