By Georg Larsen and Kasper Vedsmand
Correction29 May 2016
An earlier version of this story said that Subotica is south of Belgrade. This was incorrect. It is north of Belgrade.

On August 8, 1995, in the Croatian town of Dvor, a band of soldiers rounded up nine disabled refugees inside a school and executed them.

Metres away, a unit of Danish peacekeepers watched the massacre unfold. They had a clear view – through the large shattered windows – into the main hall, where most of the victims were shot dead.

They didn’t know if the perpetrators were Serbs or Croats. But they had an idea who the victims were. They watched as one crumpled in a wheelchair, others on to crutches and walking sticks. They all had mental and physical disabilities.

After the collapse of Yugoslavia in the early 1990s, the region erupted into conflict. Croatia had seceded and fought Serb separatists in a war that lasted from 1991 to 1995, in which an estimated 40,000 people were killed.

In 1995, a United Nations-negotiated ceasefire came into effect. Danish forces were part of a peacekeeping mission to monitor the ceasefire.

In early 1995, a Danish company under the command of Jorgen Kold set up camp in Dvor, on the border with Bosnia.

The soldiers recalled feeling like they were on holiday when they first arrived – sunbathing inside the UN camp.

But when, in August 1995, the Croatian army launched an offensive to wrest back Serb-held lands, the UN peacekeepers were jolted from their illusionary holiday.

“You are to remain neutral and take care,” were the UN’s orders.

“It was like being in a war movie but without taking part in it,” explained Henrik Terpager Staal, who was then a UN peacekeeper. “It was as if a bell jar was covering the [UN] camp.”

“There was fighting all around the camp. People were shooting everywhere.”

They watched as Serbs fled in cars, horse-drawn carriages and on foot, heading towards Bosnia. An estimated 250,000 people left in just days.

The school in Dvor served as a resting point for the refugees.

On August 8, four days after the offensive began, an officer sent a radio dispatch: 12 to 15 soldiers were moving towards the school. They were a motley crew, dressed in plain clothes and camouflage. It was impossible to tell which side they belonged to.

By this point, most of the refugees had already left the school. The former peacekeepers said they didn’t know that so many disabled Croats and Serbs had been left behind inside.

Staal was positioned on the boundary of the UN camp with a machine-gun.

He recalled what happened next. “I make eye contact with one of them. I don’t know if he’s a Croat or Serb. He lights his cigarette, and I light mine. We nod to each other as if we’re saying, ‘There’s no immediate danger.'”

The atrocities should have been stopped. We allowed murder to be committed without doing anything.

A few men entered the school, then a hand grenade went off.

From their observation post, just 35 metres away, the peacekeepers had an unobstructed view of the main hall, where they saw some soldiers enter, leading elderly and disabled people with their hands behind their heads.

Former peacekeeper Jan Wellendorff Pedersen recalled seeing the soldiers talking, then one suddenly wheeling around. He heard a shot. One of the disabled people fell to the ground.

“Then the soldier turns the other way and shoots the old lady in the wheelchair,” he said.

After killing nine people at the school, the soldiers left.

An order that never came

Pedersen was troubled by his unit’s failure to act.

“Watching them get away with it and leave like they’d been shopping, I wasn’t a big fan of that, and not being able to do a thing, especially because I knew they were few compared to us. If the order had come to ‘fire at will’, we could’ve raised our guns and shot directly into the main hall,” he said.

But the order never came.

Kold is now 61. He has soft blue eyes, blond hair that is cropped short, much like it was when he was stationed in Croatia, and a quiet, serious demeanour.

Twenty years on, the massacre still haunts him.

“I didn’t know that it was an impending massacre,” he said, explaining that he could only have acted in “self-defence”.

“I could not have prevented it.”

The words of the parents of his men – “Remember to bring my son home” – played constantly in his mind, he said, explaining that had he intervened, he would have risked losing some of them.

“None of my men were here as individuals. [They were] under my command and under a UN mandate which didn’t exist any more. Therefore, we were asked to return to the camp, keep our heads down, be quiet, and not get involved in the fight.

“If the order had been ‘fire at will’, we probably would’ve shot,” Staal said. “But then, I’m sure some of us wouldn’t be here today.”

The victims’ bodies laid untouched for four days in 30-degree temperatures until the peacekeepers ventured into the school. Four of the nine were never identified.

The victims had been evacuated from a psychiatric hospital in Petrinja, 60km from Dvor, when the shelling began there.

They left with nurses, but “the system had broken down. There was no one left to take care of them. Chaos,” remembered Bozo Bajlovic, who organised the evacuation.

He said those patients who “could walk and think clearly” probably joined the refugees heading for Bosnia. “Those who couldn’t go stayed behind. And what happened, happened.”

Ljubica Janjanin was a passenger on the bus carrying the patients. She had volunteered to help evacuating the patients so that she and her daughter could escape the fighting as well. She remembered holding one of the women in her lap. She was small – “like a child”, she said.

They were all received at the school in Dvor. The civilians were taken into the big classroom, and the patients were taken to the small classroom. When the soldiers arrived on August 8, they took the disabled to the main hall and executed them.

Two of the victims were women from Janjanin’s hometown, Petrinja, and she wants justice for them.

But the case has never been solved.

In August 2014, Kold returned to Dvor to try and find out who was responsible for the killings.

He travelled there with Villy Bogelund, the former chief investigator into the massacre for the UN war crimes tribunal.

I believe that shooting a disabled person who isn't a possible threat is as brutal as it gets. It's the same as shooting a child.

“I believe that shooting a disabled person who isn’t a possible threat is as brutal as it gets. It’s the same as shooting a child,” said Bogelund.

Twenty years on, Kold barely recognised the school, but immediately spotted the main hall where, he said, “the disabled were liquidated”.

He met Janjanin, who told him: “We looked at you and expected you to come to us. But no one came.”

“We looked so much at your soldiers that it was impossible for you not to see us. It’s not like we were ants. We tried using gestures and all kinds of things, but no one reacted,” Janjanin replied.

She said she remembers the peacekeepers looking away or turning their backs. “We were used to the fact that the UN always took care of civilians. Maybe you should have come to us inside the school.”

But the unit was instructed not to leave the camp or interfere, Kold explained.

“Why couldn’t you at least have taken the disabled across the bridge to Bosnia? Then we could all have a clear conscience today,” asked Janjanin.

At the time of the massacre, both Croatian and Serbian forces were in the vicinity of Dvor. Neither side has admitted to the killings.

General Mile Novakovic was a commander of the Serbian forces in Dvor. He was convicted in absentia by a Croatian court for war crimes committed in 1993. He died in September 2015, a year after we talked to him in his garden in the city of Subotica, north of Belgrade.

Novakovic insisted that he couldn’t be sure where his troops were at the time of the massacre.

“Our only mission after everything had fallen apart was to let the column of refugees pass without any disturbance and get out of the way of the shootings and slaughter,” he said.

He blamed the Croatian army.

Colonel Bruno Cavic was a commander of the Croatian forces in Dvor. He denied that any of his men were in the town on August 8, 1995. But he offered a hypothesis as to why the disabled might have been killed.

“Sometimes, in your mind, you think you are doing something good for them, you are ending their suffering, and you end it … You cannot help them; you don’t want to leave them to the cruel enemy who is coming,” he said, shrugging. “For me, that is one of the explanations.”

According to Kold, his unit observed at least three Croatian soldiers, with baseball caps and backpacks, near the camp on the morning of the massacre.

“Either they’re covering it up, or someone doesn’t want to remember,” he said.

“It wasn’t our job, but I still feel disappointed in myself. Could we somehow have helped? No, we would have been hit. There was no mandate, and the war took place among the refugees.”

Bogelund believes the peacekeepers had an “impossible mandate”.

Kold thinks the people who defined it never accounted for “how to help those around us.

“The soldiers found that hard to understand, and none of the people on either side were informed of what we were not allowed to do, so they expected us to help them.”

He believes the mandate needs to be made clearer for peacekeepers in future conflicts.

But former peacekeeper Thomas Karstenskov is clear about what he thinks should have been done.

“The atrocities should have been stopped,” he said. “We allowed murder to be committed without doing anything.” 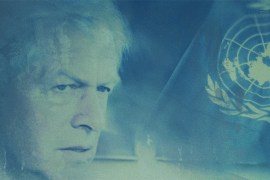 The 15-Minute Massacre in Croatia

Haunted by his decision not to intervene as civilians were killed, a former UN commander returns to Croatia 20 years on.