New York, USA – New York is famed for fashion, finance and as a skyscraper backdrop to thousands of movies. But, coming late in the primary election cycle, it usually only plays a small role in selecting the United States’ presidential candidates.

That changes on April 19 when voters in the Empire State decide whether to back the frontrunners for the Democratic and Republican nominations – Hillary Clinton and Donald Trump – or to frustrate their White House bids by choosing their rivals.

Clinton and Trump both lead polls in the state, but the competition is fierce and bitter.

Electorally, the state of 19.8 million people is a hodgepodge. Voters range from upstate conservatives to sassy liberals in New York City, where everyone from millionaires to Mexicans and Muslims has featured in campaign rhetoric.

For Peter Vandunk, 20, a comedy club barman, the 2016 election is about closing the gap between Wall Street’s rich elite and the “99 percent” of New Yorkers who struggle to pay rising rents, he told Al Jazeera at a rally in lower Manhattan.

He backs Bernie Sanders, the Vermont senator challenging Clinton for the Democratic nomination, saying the socialist will hit the “stodgy people who walk around thinking they’re better than everybody because they make a little more money than you”.

While Sanders’ pledge to “break up the banks” resonated with a young, mostly-white crowd of some 27,000 in Washington Square Park on Wednesday, it does little to woo the fund managers behind much of the city’s economy.

“If somebody talks about Wall Street fat cats, they won’t get a good reaction on Wall Street,” Mark Garbin, 65, a managing partner of the consultancy Coherent Capital, who lives in the leafy suburb of Westchester, told Al Jazeera.

“Once you strip away the emotionally-charged rhetoric, Bernie’s policies are fraud; he makes up statistics and has no credibility.”

Garbin will vote in the Republican primary – but not for the populist celebrity construction tycoon Trump. Instead, he opts for the “sensible, level-headed” John Kasich, 63, even while the Ohio governor’s chances are slim, he noted.

The US primaries are seldom contested as doggedly as they are this cycle, raising the prospect of the Republicans and maybe even the Democrats going to their conventions in July with no clear idea who their presidential candidate will be.

It's been a long time since New York has gotten this kind of attention. This is because it's such a close race on both the Democratic and Republican sides, and three of the top contenders are from the state.

“It’s been a long time since New York has gotten this kind of attention,” said Jeanne Zaino, a political scientist at Iona College. “This is because it’s such a close race on both the Democratic and Republican sides, and three of the top contenders are from the state.”

Polls indicate that Trump leads his rivals by 31.3 points, according to Real Clear Politics, an aggregator. Clinton leads Sanders by 13.8 points, but the gap has narrowed and Sanders has defied expectations previously, as with his surprise win in Michigan in March.

“It’s critical on both sides. It’s a must-win for Sanders and a must-win for Clinton. In the Republican camp, it’s really important for Donald Trump to recapture some of the momentum that he’s lost recently,” Zaino told Al Jazeera.

New York’s primary is also a battle over home turf. Sanders, 74, was born and raised in Brooklyn, long before the hipsters arrived. Clinton, 68, lives in the dainty hamlet of Chappaqua, north of the city, and served as a New York senator between 2001 and 2009.

Both Democrats have their campaign headquarters in Brooklyn and have taken campaign pit-stops for local delicacies – cheesecake for Clinton and a Coney Island hot dog for Sanders. But their local credentials are under scrutiny.

In transit, Clinton was seen struggling to swipe her metro pass. Sanders, who left the city in the 1960s, fared worse, saying he thought subway turnstiles required tokens – not the MetroCard system that outmoded them in 2003.

The most authentic New Yorker is Trump, 69, who was raised in Queens and lives amid his high-rise Manhattan property portfolio. He scored points against Republican rival Ted Cruz, 45, a Texan senator, by defending “New York values” and a spirit that withstood the 9/11 attacks.

“Just walk around New York City and you’ll see his name on a building by Central Park, then another down Fifth Avenue,” Maurice Carroll, of Quinnipiac University Poll, told Al Jazeera. “He’s not only a native, he’s ubiquitous.”

But Trump’s nativist railing at Mexicans and Muslims has alienated many from the state’s minority groups, including blacks (17.6 percent) and Latinos (18.6 percent). They typically vote Democrat; polls suggest they favour Clinton.

The election extends beyond the skyscraper city of 8.6 million people. Upstate are hills, lakes and such rustbelt cities as Buffalo and Rochester that have witnessed population declines and factories shuttering in recent decades.

“There are still so many folks who are out of work or underemployed from industries pulling out, and also farms not doing as well as they once did,” Kate Bartholomew, 52, a science teacher from Watkins Glen, an upstate village, told Al Jazeera.

Bartholomew said that “anger and frustration” have nudged voters to Sanders, who blasts the free trade deals that pushed manufacturers overseas, and Trump, whose promise to “make America great again” enlivens the jobless.

Gun ownership rules are a bigger issue upstate, and one of the few policy areas where Clinton sits to the left of Sanders. Hydraulic fracturing is another concern, said Bartholomew, and may “flip people” to Sanders’ pro-environment camp.

New York has among the strictest registration rules in the US, leading to complaints of exclusion. The deadline for first-time voters passed on March 25, the window for switching party affiliation shut back in October.

Under a “closed primary” system, only those registered as Republicans or Democrats can cast ballots. Independents cannot. In the Democratic race, this is expected to favour Clinton and may help end Sanders’ recent winning streak.

The rules also hurt Trump. Two of his children, Eric, 32, and Ivanka, 34, have campaigned alongside the billionaire, but cannot vote for him in the New York primary because they both missed the registration deadline.

There are 97 delegates up for grabs in New York’s Republican race. Trump currently has 755, outpacing Cruz’s 545, and he aims to secure at least 1,247 delegates to win a first-round vote at the party’s convention in July, he said.

Without that bulletproof majority, Trump risks multiple ballots and a contested convention in which he could be outmanoeuvred. Cruz, who appeals to Evangelicals, has proven to be a wily political operator.

“It’s not a pretty process to watch,” said Zaino.

“The last truly contested conventions were in 1948 and 1952. The vast majority of Americans have never seen one – certainly not one played out under the glaring spotlight of Twitter and other social media.”

New York’s Democratic race offers 247 delegates. Clinton holds 1,790 delegates compared to 1,113 for Sanders, putting her on course to scoop the 2,383 needed to secure the party’s ticket for the White House, where she last lived as the first lady between 1993 and 2001.

She touts her years of political experience and is the odds-on favourite, but is still under investigation over an email scandal. Other big states, including California, Pennsylvania and Indiana, will vote in coming weeks and could also prove decisive.

“If Sanders beats Clinton in New York, and she can’t win her home state, there’s gonna be a lot of nervousness about her viability,” Jeff Smith, a New School politics scholar and former Democratic state senator, told Al Jazeera. 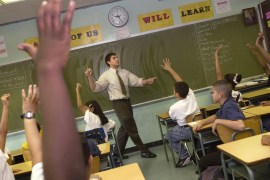 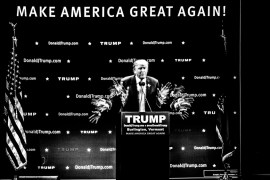 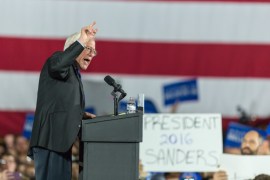