By Drew Ambrose and Sarah Yeo

Vientiane, Laos – In the blinding glare of headlights, the traffic keeps coming. Motorbikes swerve dangerously, cars drive down the wrong side of the road – it’s Friday night in Vientiane, the busiest night of the week on the Laotian capital’s roads.

With the country’s economy booming, more people in Laos can afford motorbikes and cars than ever before – and they drive the vehicles at breakneck speed – with no traffic lights or roundabouts to slow them down.

We are more than a rescue service, we try to bring hope. When there is trouble in Vientiane and the family don't know what to do, they just call us because they trust us.

The death toll from road accidents in Laos increased by 26 percent last year. Vientiane has arguably the worst road toll per capita in Asia, and one of the worst in the world.

For most drivers, volunteer response service Vientiane Rescue is their only hope when tragedy strikes. Set up by French paramedic Sebastian Perret in 2010, Vientiane Rescue fills the gap in a city that severely lacks emergency services.

The official ambulances are mainly used to transfer patients between hospitals and they charge patients for their services. So without assistance from volunteers, serious accident victims would be – and often are – left to die on the side of the road.

When night falls, accidents pile up and the Vientiance Rescue team’s phones are ringing off the hook with calls from people desperate for help.

Sirens blaring, they head out to deal with the carnage on Vientiane’s streets – mainly caused by speeding, drink-driving, and underage motorists.

This time, a motorbike rider, who has sped down a dark gravel road without any streetlights, smashed into a concrete block left in the middle of the road. It’s pitch black, except for the flashing ambulance lights. Quickly assessing the situation – a broken leg – the rescuers strap him to a stretcher and attach a cervical collar.

The frantic race to get the injured man to a hospital begins. As the ambulance swerves through the streets, Perret tries to steady the man who is writhing in pain.

The team spends the night racing around town, responding to emergency calls, identifying injuries, bandaging wounds and dealing with broken bones and the distressed.

Vientiane Rescue responds to about 19 accidents each day and Perret estimates that the free ambulance service sees as many as 50 deaths every month.

Known as the “saviours of the street”, the service operates on a shoestring budget of $2,000 a month and is funded entirely by private donations. It’s a battle to survive and the team tries to save money wherever they can, re-using equipment, even bandages, which Perret admits is far from ideal.

“They’re supposed to be disposable,” he says, “but these bandages cost about $2 and we use them a lot so…”

Most volunteers working for Vientiane Rescue are students like Soygnen Inthamanivong, who take the night shift after school. They sleep in tents outside the small booth which serves as their office.

One night, Inthamanivong was called to an accident and discovered the unconscious victim was one of her close friends. He had been returning from a party when he was thrown from his car after hitting an electricity pole.

“I thought he was a regular Joe … like other cases,” says Inthamanivong. “But when I saw his face I didn’t know what to do. His siblings were crying next to him. His face was normal but his stomach was badly injured. I tried to revive him but in the end, I couldn’t.”

‘It’s never enough but it’s better than before’

Drink-driving is the biggest cause of accidents in Laos. The country is the second biggest consumer of alcohol in Southeast Asia, according to the World Health Organization.

But speeding and motorcyclists not wearing helmets also contribute to the injury and death toll.

Inthamanivong and Perret are called to help two men after the motorbike they were riding on hit a parked car. Both men are drunk. One has a broken leg. By the time they reach the hospital, the other man loses consciousness. Perret says it is difficult to know if it’s a symptom of head trauma or too much alcohol. He believes there needs to be stronger deterrents to encourage people to abide by the law.

Lieutenant Colonel Khamleck Xayasith commands the country’s police traffic division. He says the police have breathalyzers but they don’t use them because the equipment doesn’t work.

“So when an accident happens, we prove someone is driving drunk by interrogation, their smell or behaviour,” he says. “We’re lucky – most Lao people tell the truth when we ask them if they are drunk.”

There is no will to change anything here. That's the biggest problem ... nobody cares.

Laws for prosecuting bad driving do exist in Laos, but enforcement and education is difficult, Lieutenant Xayasith says, particularly in rural areas.

“Compared with most countries we don’t have money or resources. We don’t have equipment for emergencies where people could die,” he says.

According to him there are only five speed guns in use across the whole country, and most of his officers in Vientiane just direct traffic.

Meanwhile, government medical services are dealing with their own limitations. Mittaphab Hospital, one of Vientiane’s biggest medical centres, is struggling with shortages of staff and equipment.

The hospital receives up to 1,000 crash victims a month. Snong Thongsna, a doctor at Mittaphab Hospital, says victims from across the entire country are referred to this hospital.

“We cannot provide the service to our people because we need more specialists and equipment … In all of Laos we have two surgeons who deal with head injury for operations,” he says.

While authorities struggle for solutions, every day four people die in traffic accidents across this tiny nation.

With accident rates exploding in Vientiane, many of the victims rely on Sebastian Perret and his team as the volunteers continue to pick up the pieces as best they can.

“We are more than a rescue service, we try to bring hope. When there is trouble in Vientiane and the family don’t know what to do they just call us because they trust us. And that’s the most important thing…it’s more important than money and equipment…it’s the trust we have amongst the population,” Perret says.

“It’s never enough but it sure is better than before. We want to get to international standards. For us and victims, we’ve got to try and help better,” he says.

From the 101 East documentary Laos: Saviours of the Street. Watch the full film here 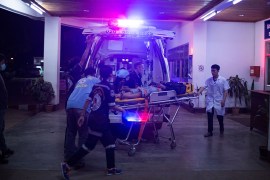 Laos: Saviours of the Street

101 East examines what is driving the high number of fatal road accidents in Laos and Southeast Asia.