By Andrew McFadyen and Yarno Ritzen

In some parts of Glasgow, a child is more likely to end up in prison than win a place at Glasgow University.

In 2015, fewer than five students from Easterhouse, a housing scheme on the edge of the city, won a place at Glasgow University. That’s two fewer than the seven who were sent to Polmont Young Offenders Institution.

These numbers give us a glimpse into the level of educational inequality in Scotland’s biggest city.

Glasgow is the fourth oldest university in the English-speaking world and regularly ranks in the top 10 universities in the UK. Technology developed by its researchers recently helped scientists to prove the existence of gravitational waves, first predicted by Einstein.

Former student and cultural commentator Pat Kane describes how it is both a world-class and a local institution.

“The other role it should play is as a symbol of aspiration for the ambitious, talented children of Glasgow, no matter what their background is. These figures show that it’s failing on that front – but it can’t in any way be entirely the blame of the institution itself.”

Al Jazeera submitted a Freedom of Information request asking Glasgow University to break down its admissions by postcode, which reveal the neighbourhoods new students come from.

The response shows that, in 2015, there were 1,239 first-year students with Glasgow postcodes. That’s just under a quarter of the total intake of 5,771 new undergraduates.

The Glasgow postcode area includes the city itself and its surrounding suburbs. The information provided to Al Jazeera shows that the communities the highest numbers of students come from are outside the city boundaries.

More Glasgow University students come from the affluent south side community of Newton Mearns than anywhere else in Scotland.

Last year, this prosperous suburb, known for its blonde sandstone bungalows, provided 57 undergraduates. It was closely followed by neighbouring Clarkston with 54 new students, and Bearsden, on the north of the city, with 52. Each of these well-to-do neighbourhoods sends more than 10 times as many young people to Glasgow University as Easterhouse.

Other working-class communities in Glasgow do equally badly. Fewer than five new students come from Bridgeton, in the east end, and seven from Possilpark.

Patrick Harvie, Glasgow MSP and co-convenor of the Scottish Greens, said: “Unequal access to higher education is a clear reflection of the deep inequality that tarnishes our society more generally. The next session of the Scottish Parliament will finally have some of the real economic powers it needs to start changing that, but we must also make sure that schools, colleges and universities have long-term security about their funding.”

He added: “Only if all these institutions are able to reach out to and support talented students from all backgrounds will we see real progress in closing the gap in life chances.”

Al Jazeera also submitted a Freedom of Information request to Polmont Young Offenders Institution, asking it to break down its own admissions by postcode. The results illustrate just how great the gap in life chances really is for Scotland’s children.

In each of the past four years, more young people from Possilpark, one of Glasgow’s most deprived neighbourhoods, have gone to jail than to Glasgow University.

In 2014, 17 new inmates at Polmont had a Possilpark postcode. That was more than three times the five students who made it to Glasgow University that year.

Last year, seven of the university’s new undergraduates came from Possilpark; 10 young people from the area were imprisoned at Polmont.

A spokesperson for Glasgow University says it is committed to widening access and has launched an initiative which will see staff visit nearly 50 target secondary schools across the west of Scotland to speak to more than 12,000 pupils about their future choices.

“The University of Glasgow runs extensive and extremely successful outreach programmes to ensure that we recruit the most able and ambitious students regardless of socioeconomic background,” he said.

“This is seen in the rise in the number of Scottish-based students from the 40 percent most disadvantaged areas to more than 25 percent of our undergraduate intake – easily the highest of any of Scotland’s ancient universities.”

Despite its efforts, the information obtained by Al Jazeera indicates that Glasgow University is still dominated by the middle classes. However, this certainly does not make it unique.

A separate Freedom of Information request to Strathclyde University, which has a campus in Glasgow city centre, revealed that it admitted 103 first-year students from Newton Mearns last year and 102 from Bearsden, but just seven from Easterhouse. These figures suggest a social divide that is at least as great as that of its older and more prestigious neighbour.

Willie Bain is one of the rare success stories. Almost half the pupils at his old school, St Roch’s, are entitled to free school meals because their parents are on some form of benefit.

He made it from a council flat in a high-rise to become a law lecturer and eventually the MP for the area where he lives, which includes Possilpark, until he lost his seat in last year’s election. He worries that social mobility might actually be going backwards.

“By the time people have reached primary school, inequalities are already engrained. Nursery education is key to unlocking that, combined with what’s happening in the home in the early years of a child’s upbringing.”

Young people in areas such as Possilpark and Easterhouse have as much ability as those elsewhere, he says, but the barriers they have to overcome can be cultural as well as financial.

“In my time at school, it was seen as uncool or geeky to seek to excel at exams and get on. There was often peer pressure not to excel. It marks people out as different. Children who are different can find it hard to be popular in schools and find an identity.”

These views are echoed by Pat Kane, who became a 1980s icon as lead singer of the band Hue and Cry. He grew up in Coatbridge, a soot-stained industrial town on Glasgow’s eastern fringe that attracted generations of immigrants from Ireland to work in its mines and foundries.

He says: “It matters hugely that, according to these statistics, Glasgow University is effectively closed off to so many kids from the poorer parts of the city.

“What I loved, as a young man who had certainly suffered a lot of grief for being ‘arty’ and ‘sensitive’ at my state school, was discovering a range of eccentric, quirky, creative people, who accepted me for exactly who I was, so accepting that I eventually married one of them (Joan McAlpine MSP, my ex) and produced two daughters with her.”

Glasgow University is the sort of institution that can help young people to find their talent and give them a decent shot at realising their full potential. But first they have to get through the door.

A spokesperson for the Scottish Government said: “We are committed to widening access to university and have delivered significant improvements compared with the position in 2007-08. We have invested over £76 million in widening access and articulation places over the past three years and we continue to fund a wide range of other initiatives to support access.”

The Scottish Government’s Commission on Widening Access suggested, earlier in March, that universities should lower their entrance requirements for children from the poorest backgrounds, so they are based on the minimum academic standards needed to complete a degree.

This proposal is being carefully considered along with the commission’s other recommendations. 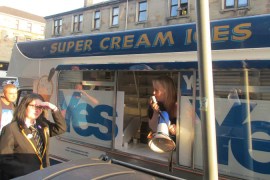 Scotland’s referendum gets a teenage kick

Referendum on Scottish independence is the first major election in the UK where 16 and 17-year olds get a vote. 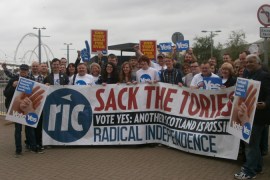 Whatever the referendum’s outcome, energy created by the grassroots independence campaign has changed Scottish politics. 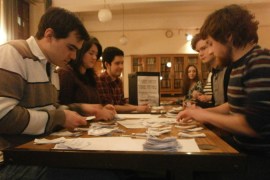 Campus referendum seen as a possible harbinger to next year’s vote on Scottish independence from the UK.