Kabul, Afghanistan – A monument has been inaugurated in memory of Farkhunda Malikzada in front of the Kabul River, where her body was set on fire by a crazed mob a year ago, in March 2015.

On the day of her death, Farkhunda was falsely accused of burning the Quran. The 27-year-old was then attacked and killed by a mob of mostly men who beat her, set her body on fire and then threw it into the Kabul River.

Mass protests were held after her death and some of her attackers were tried and sentenced. However, those attackers initially sentenced to death had their sentences overturned or shortened, while others were set free.

The Solidarity Party of Afghanistan organised a commemoration event on March 17, nearly one year after the killing. Hundreds of Afghans gathered to declare their intention to fight for justice.

“The Shaheed Farkhunda monument will stand as a testimonial to the pledge of those who have vowed to fight relentlessly against the ignominy of ignorance, bigotry, misogyny and obscurantism,” the Solidarity Party of Afghanistan said in a statement.

Al Jazeera spoke to some of those attending the commemoration.

“Once again, Afghanistan’s government has shown the world that this country is hell for women.

“We knew Afghanistan’s judicial system, law and order would never work in favour of women in Afghanistan, and we were proven right after all the accused in Farkhunda’s case were not punished.

“I don’t trust the government any more. We are on our own.”

“I came down here to the memorial to express that we all are Farkhunda and we want justice.

“But I know our government will fail once again to do anything for women. Farkhunda is not the first one and won’t be the last one.

“We will keep fighting for our rights and protect women. We will also make sure innocent women who’ve faced brutal deaths like Farkhunda get justice.”

“Women are living with fear in Afghanistan.

“I am seeing many women have come down today to support justice for Farkhunda. This should continue as we all know, with this kind of government, law and order, our future is dark.

“We should all stand united.”

“We are hearing about how women are treated in Afghanistan every day.

“Some are being stoned to death, others are being raped and silenced, many are killed who are nothing but innocent.

“We are powerless, thanks to our government.”

“Today, I am here because I see Farkhunda in my daughter.

“Every day, when I look at my daughter, I think, if it was her, what would I do?

“Would I have been able to save her? No. This thought always scares me. It could be my daughter any day.

“This has to stop.

“Farkhunda was beaten and burned alive for something she never did. Where is our justice system? Who do we rely on?

“I want Farkhunda’s killers to be killed the exact same way she was killed. Dragged on the road, beaten and burnt alive.”

“I’ve been crying all day today thinking of how helpless we all are.

“It has been a year now and nothing is being done to serve justice to Farkhunda and her family.

“Her mother is living in hope every day, hope of getting justice.

“Farkhunda will not be forgotten. 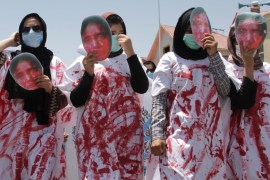 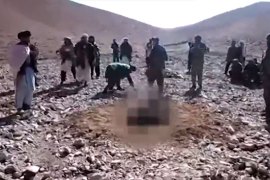 Video emerges of public execution of teenager found ‘guilty’ of having pre-marital sex in Taliban-controlled Ghor. 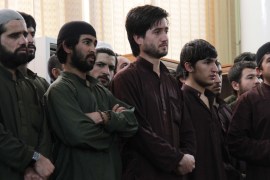 Four men convicted over mob killing of woman in Kabul have sentences downgraded to 20 years in prison.