This year, as acting Irish Prime Minister Enda Kenny meets Barack Obama at the annual St Patrick’s Day dinner, talk of slavery will be far from the agenda.

Yet, as the Irish diaspora celebrate their culture, many are falling prey to a myth sweeping the internet that the Irish were themselves slaves in the US.

It has given rise to a plethora of racist memes, and is gaining traction among some white Americans despite the objections of historians.

These “Irish slave” memes are frequently used to derail conversations about slavery and racism.

When they proclaim that “Irish slaves were treated worse than any other race in the US”, they attempt to diminish the history of the slave trade, the popular Black Lives Matter movement and calls for reparations for slavery in the US and the Caribbean.

So where is this coming from?

The most popular online article that falsely equates indentured servitude or penal slavery with racialised slavery is hosted by the Global Research website. It has been shared nearly one million times. The online diaspora website, Irish Central, published an article based solely on this source, which has, in turn, been shared more than 149,000 times.

Irish historian Liam Hogan is at the forefront of efforts to debunk the “Irish slave” myth. He says the position of the unfree Irish in the New World was one of “indentured servitude” and describes articles like that on Irish Central as “ahistorical”.

More needs to be done to stop the spread of this inaccurate mythology, Hogan suggests.

“These articles have created an Irish slave trade timeline, ostensibly a fantasy, which runs from 1612 to 1839,” he explained. “This is to make it appear that there was a concurrent transatlantic slave trade of Irish slaves that historians have covered up because of liberal bias.

“Historically, the majority of Irish prisoners of war, vagrants and other victims of kidnapping and deception – thought to have numbered around 10,000 people – were forcibly sent to the West Indies in the 1650s. Those that survived were pardoned by Charles II in 1660.

“In contrast, the transatlantic slave trade lasted for four centuries, was the largest forced migration in world history, involving tens of millions of Africans who were completely dehumanised, and its poisonous legacy remains in the form of anti-black racism. So this neo-Nazi propaganda is false equivalency on an outrageous scale,” he said.

In fact, it is well documented that there were Irish involved in the slave trade and that some were even slave owners – not only in Irish-dominated Montserrat but also in all the slaveholding states in the US, Jamaica, Barbados, British Guiana, Haiti, Trinidad, Antigua, Haiti, Martinique, the Danish West Indies and Cuba.

The plight of the indentured Irish, however painful, was not racialised and their status was sometimes voluntary, with a migrant working for free for a period of time to pay off the cost of their trip across the Atlantic.

Indentured servitude was a widespread practice at the time, so it is difficult to ascertain the exact number of Irish affected by it. But in his book, The Irish Diaspora, Andy Bielenberg estimates that between 1630 and 1775, 165,000 Irish migrated from Ireland to the British colonies in the Americas and the Caribbean. Of course, not all of these would have been indentured.

Matthew Reilly is an archaeologist at Brown University who has researched slavery in Barbados. He says the idea of Irish slaves has no historical foundation.

“The Irish slave myth is not supported by the historical evidence. Thousands of Irish were sent to colonies like Barbados against their will, never to return.

“Upon their arrival, however, they were socially and legally distinct from the enslaved Africans with whom they often laboured.

“While not denying the vast hardships endured by indentured servants, it is necessary to recognise the differences between forms of labour in order to understand the depths of the inhumane system of chattel slavery that endured in the region for several centuries, as well as the legacies of race-based slavery in our own times,” Reilly said.

Many of the memes circulating online justify police brutality against black Americans, which has raised concern considering the high percentage of Irish Americans in the US police force. The powerful NYPD Emerald Society – whose goal is “to help foster Irish heritage and tradition within the department – is more than 60 years old and is just one example of the Irish diaspora’s influence on US policing.

There is even an “Irish Lives Matter” meme featuring the tags “Irish Power” and “Irish were the first slaves”, while the white supremacist media outlet Stormfront features links to books and articles published on the topic.

Facebook groups have sprung up propagating the myth, which has also been widely circulated on Twitter, most recently in response to the singer Beyonce’s Super Bowl appearance, with its nod to the police shooting of Michael Brown in Ferguson and the Black Lives Matter campaign.

“While indentured servitude would be regarded by contemporary standards as slavery, it was less violent than the transatlantic slave trade out of Africa. The Irish, because of the colour of their skin, had preferential treatment and pathways out unavailable to black slaves,” he explained.

“Unfortunately, the Irish slave idea seems to be coming from a point of division and not from one of empathy. These memes actually diminish the Irish experience of indentured servitude in the Americas by turning a sad history into a token of race oppression.” 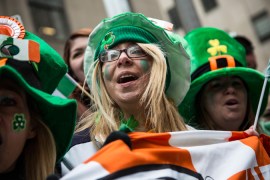 St Patrick’s parades held in US amid gay row

About a million spectators watch New York event even as mayor and beer companies stay away over exclusion of gay groups.