Four years ago, at the Republican convention in Tampa, a young senator from Florida took the stage.

Marco Rubio won his Senate seat after initially going up against the state’s sitting Governor Charlie Crist in the Republican primary.

At one point, he was 20 points behind, but harnessing the support of the right-wing Tea Party, he forced Crist out of the race.

There were huge expectations on the son of Cuban immigrants. If there was a next generation of conservative politicians, Rubio was close to the front of the line.

His 2012 convention speech was widely cheered in the Tampa hall. People spoke enthusiastically of his performance, and at the time, I wrote that the only thing that seemed to be missing was the phrase, “I’m Marco Rubio and I’m running for president”.

Rubio jumped into a crowded race, believing his youth, his background and his charisma would be enough, even though he was what Republicans had spent eight years accusing Obama of being: a one-term senator with little experience.

Still, he was Hispanic, a group the Republicans knew they had to reach after their defeat in 2012, and he was conservative enough to appeal to the base of the party. And he was articulate.

But for all of his strengths, there were two moments which damned his presidential campaign.

The first came after a respectable finish in the first nominating contest in Iowa, where he finished third, exceeding expectations and gathering vital momentum. He, and many analysts, painted that result as a “win”.

And he moved on to New Hampshire.

But there on the debate stage, in just 90 seconds, he unravelled.

He was attacked by New Jersey Governor Chris Christie who accused him of repeating himself – of using the same consultant-approved, focus-tested sound bites. And Rubio responded by repeating himself. He looked and sounded like a robot.

He went from a potential second place finish in New Hampshire to fifth. He told his supporters the loss was down to him and it would never happen again. And to be fair, on the debate stage it didn’t.

But his campaign took the strategic decision that if it was going to win, it had to go after Trump.

And the political adage is: If you go to kill the king, you better succeed. He went on the attack and he got personal. He criticised the way Trump looked, suggesting his “little hands” meant other parts of his anatomy were small.

It was gutter politics and it backfired. Rubio’s numbers went down. Trump’s went up. People didn’t like what they heard and they punished the Florida senator.

If election campaigns can be won with memorable moments, they can be lost that way too.

And so the mantle of the establishment candidate to take down Trump moves on to John Kasich.

His win in his home state of Ohio breathes new life into the governor’s campaign and briefly blunts the Trump momentum.

He will hope he can pick up the real anti-Trump vote in future contests, but he’d still need a turnaround of remarkable proportions to win the nomination.

Ted Cruz will insist he is the only real alternative. He stays second in the delegate count, but as much as people don’t like Trump, they also don’t like Cruz.

Rubio is young enough at 44 to think about running again. He will have learned his lessons from this failed campaign.

He will emerge a wiser, more experienced candidate, chastened by the experience and stronger for the extraordinary battle with Trump. 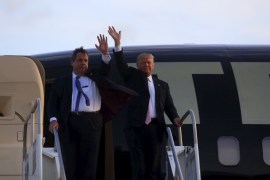 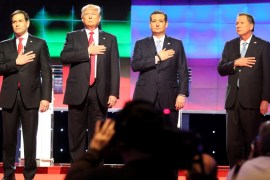