Nablus, Occupied West Bank – Seven years ago, teachers at the Vanguards of Hope school in the occupied West Bank’s Nablus city got together with one goal in mind: to get their children to enjoy reading. They never imagined that in a few years their grassroots programme would be awarded a $1m prize for having the best reading initiative in the Arab world.

“We saw that children in Arab countries just don’t read as much as those in the West,” Hadeel Humeid, the school’s reading programme coordinator, told Al Jazeera. “When we initially got together in 2009, we wanted to change that, to teach our kids here reading for fun, like we see in other countries. After a few years, we saw that it was working.”

According to the Arab Thought Foundation report on Cultural Development, the average yearly reading period a child from an Arabic-speaking country has is six minutes, while their peers in “the West” clock a yearly average of 12,000 minutes.

“These statistics were unacceptable to us at our school,” Hadeel said.

Earlier this year when the school was invited, along with 3,000 others from across the Arab world, to participate in Dubai’s reading challenge, pupils and administrators at Vanguards of Hope were honoured just to be considered.

The school, which takes boys and girls from ages 4-10 and is girls-only for ages 10-18, won the largest prize in the competition. With the $1m award, the school plans to build a new library for its pupils.

The school, a religious public school in the heart of Nablus city, is in a gated compound of three large buildings. The halls are laid with polished Jerusalem stone and classrooms doors in the main building open to a garden courtyard in the centre of the campus.

While the Vanguards of Hope’s campus is beautifully cared for, the main library is much smaller than one might expect from a school that just won such a prestigious reading award. The main library, the largest of the four on campus, is a small room with around a dozen large wooden bookshelves lining its walls.

“It’s small, yes, but there are more books in the classrooms than the library,” one of the school’s Librarians said. “That is part of the programme.”

From such a young age kids have smartphones and tablets and so much technology that it was hard to convince them that something like reading could be done for fun.

The initial plan for the reading programme at the school was focused on the idea that reading was an essential part of every subject. Teachers decided that every classroom would have bookshelves filled with Arabic novels and books relevant to age groups, not necessarily the classroom’s primary subject.

“We wanted to be sure we weren’t just focusing on Arabic or English classes, we wanted to include maths and science in the programme as well; that was one of the very important ideas that everyone agreed on,” Hadeel said.

With the $1m award, the school hopes to have books in every classroom, and enough to fill a new larger library. Fatima Alul, an English teacher at Vanguards of Hope, said she has been amazed at watching the change in her pupils.

“One of the core aspects of our reading programme is a mandatory 20 minutes of reading at the start of the day,” Alul said. “At first it was so hard to get the kids to sit down and just read, it was a chore for them, but now the difference is incomparable. Our kids are genuinely reading for fun.”

Hadeel said the moment when she realised that the school had done something special was on a school bus during a field trip. “I was getting the kids to quiet down, and I asked who had a book to read with them, and every child on the bus had brought a book they were reading on their own – not assignments – but books they were reading for fun.

“It was amazing to see all these kids sitting reading their books, when it hadn’t been planned.”

Alul said one of the hardest challenges in encouraging young readers to enjoy diving into a book is the takeover of technology. “From such a young age kids have smartphones and tablets and so much technology and reach to the world that it was hard to convince them that something like reading could be done for fun. But once they find that book that speaks to them, they get lost in it,” Alul said.

“It’s hard to explain to children until they experience that on their own, and our programme has been the push our kids needed to learn what it means to be a reader.”

Another challenge Vanguards of Hope faces is actually finding books to buy for their school. At the start of the programme, teachers began taking turns to go to book fairs, publishing events and bookstores across the occupied West Bank to find books to buy for the school. Bookstores in the West Bank are generally very small shops that often cater to adults.

“There are just not as many books released in Arabic, because the Arab world has such a problem with the lack of reading,” Alul said. “We don’t have these huge corporate stores that have thousands of topics. Hopefully in the future there will be more readers in the Arab world, and with more demand there will be more supply – that’s what we hope for.” 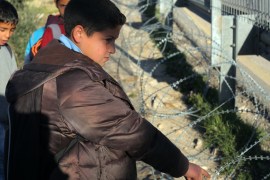 A harrowing walk to school for Palestinian children

Pupils in the West Bank village of Tuqu pass by barbed wire fencing and armed Israeli soldiers every morning.