From the filmmakers, Jenna Belhumeur and Elena Boffetta:

Last year, we met Otis Johnson at a New York City shelter for ex-convicts. Everyone there was trying to get their feet back on the ground. Otis had just got out of prison after serving a 44-year sentence. The last time he had seen his family was May 1975.

When we shared Otis’s first story of being reintroduced to the modern world, viewers were amazed by just how unfamiliar everything was to him. iPhones, Times Square, jars of pre-mixed peanut butter and jelly … everything was new or starkly different.

INTERACTIVE: My life after 44 years in prison. The story of Otis Johnson

His story clearly resonated with people. More than 12 million people watched Otis’ story on YouTube, and we wanted to show them what happened next.

We went to Asbury Park, in New Jersey, with Otis to try to find them. Reconnecting with family was something he had said he was always interested in doing, but hadn’t got round to yet. After all, he was still learning how to navigate the city. He had a small box where he kept old, tattered photos of family members, but that was basically all the information he had on them.

“The only address I really have is Asbury Park,” Otis told us. So we took the train to Asbury Park not knowing much.

But we did have Otis’ memory. Once we arrived at the train station and began roaming the streets, small things about his old home slowly came back to him: extended family members, friends, shops. He wanted to find his aunt, Dottie Moore, and some other family members. He said many would probably think he was dead.

When we talked to Otis about his relationship with his family, his answers were complicated. He was a member of the Fruit of Islam (the paramilitary wing of Nation of Islam, the Islamic religious movement once famously led by Malcom X) in his younger days. The Nation of Islam’s stated goals were to improve the spiritual, mental, social, and economic condition of African Americans. Otis was a devout Muslim who said he helped “clean up the streets” of drug dealers.

But Otis said some of his family members didn’t buy that. He didn’t know if they would be angry or happy to see him after all these years away. He had a nervous energy about him as we walked down Pine Street, knocking on doors and asking strangers about Dottie Moore.

This final story on Otis Johnson is one of reconnection and reconciliation. It is the story of a man on a quest to reunite with remnants of his past and one, we hope, many can relate to. 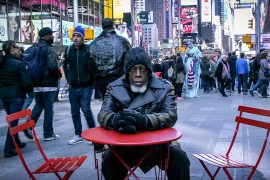 My life after 44 years in prison

An American man’s story of reintegration with the modern world.