As the Syrian government forces, backed by allies, inch closer to a decisive victory in the ravaged rebel stronghold of east Aleppo, t he impending fall of the city to regime forces would be the biggest setback for rebels since the conflict broke out in 2011.

It could also mark the start of a wider military shift that sets the course of the war in the Syrian regime’s favour.

In less than a month, Syrian troops, with unfettered Russian air support, were able to recapture 90 percent of the eastern part of Aleppo. On Monday, the Syrian army claimed that 98 percent of east Aleppo was in the hands of regime forces.

Reports also indicate a massive exodus of people to either remaining rebel-held districts or government-controlled areas in the western part of Aleppo. The Russian Defence Ministry claimed that 13,346 civilians had left rebel-held areas in the past 24 hours, and 728 rebels laid down their arms and surrendered.

The United Nations human rights office had warned on Friday that hundreds of men have “gone missing” after crossing into regime-controlled areas of Aleppo as Russian and Syrian air strikes continue to pound the city.

The ground offensive and the intensive aerial bombing campaign, which began on November 26, left most medical facilities, civil defence and municipal centres and vehicles, as well as schools, completely destroyed. With key routes once securely connecting the city to Turkey chocked off, civilians found themselves trapped inside without food, medicine and water.

In 2012, rebels pushed to take Aleppo, once Syria’s largest city and commercial capital, in the hope of turning it into a rival capital to Damascus and using it as a base to expand opposition control. Instead, the city had been roughly divided into two, with west Aleppo being under government control, ever since.

Brita Haji Hassan, head of the  local council of Aleppo,  says he refuses to call it the “fall of Aleppo” and contends that “the revolution will continue”. Haji  Hassan was a communications engineer before he was elected to head the local council in once-liberated east Aleppo in November 2015.

Al Jazeera spoke with Haji Hassan on the regime’s probable victory and its implications for the Syrian revolution.

Al Jazeera: East Aleppo had been a key rebel stronghold since 2012. How did the rebels lose control?

Brita Haji Hassan: In 2013, there were two million people living in eastern Aleppo.  Aleppo was the first city to drive Islamic State of Iraq and the Levant [ISIL] out – exactly in December 2013. Simultaneously with the expulsion of ISIL, the barrel bombing [campaign by the regime] started. In September 2015, Russia intervened and launched an aerial bombing campaign on Aleppo city.

Their main objective was the expulsion of civilians from the city. Then, the siege began on July 8, 2016. There remained 325,000 people in Aleppo city [at that point]. Do you comprehend the kind of bombing and scorched-earth policy they applied that could drop the city’s population from two million to 325,000 people in just three years?

Today, there are fewer than 100,000 people in Aleppo city, squeezed into a small area and are awaiting death. They want a safe passage so they could leave. But no one is listening and the whole world is silent.

The regime has control of 90 percent of the [once] liberated areas. They targeted hospitals, completely destroyed the city’s infrastructure, rescue centres, schools, the council’s services offices, the council’s warehouses, etc.

Al Jazeera: Many analysts argue that the opposition’s infightings and divisions are to blame for the current situation in Aleppo. What is your response to that?

Haji Hassan:  On the contrary, the situation in Aleppo deteriorated due to the scorched-earth policy that is applied by the regime and Russia’s unwavering stance. This is what got us to this place. Russia wanted to drive al-Nusra Front out, and then started targeting the Free Syrian Army [FSA].

And now, they want to kill all civilians.

These civilians are basically hostages in the hands of Russia. Russia is the cause of this. Had Russia not intervened, Syria would have been liberated, not only Aleppo.

Al  Jazeera: On Saturday,  following the meeting with Western and Arab foreign ministers in Paris , the Syrian opposition announced that they were ready to negotiate with Assad “without pre-conditions”. How does that reflect on the revolution?

Haji Hassan: If the bombing stops, the opposition will sit with him – not to negotiate, but to expose him in front of the whole world. But we can’t sit with him without preconditions when the bombing is ongoing. Any political process for a solution has to go together with ending the bombing. So, we cannot sit with Assad now.

Al Jazeera: Let’s assume the regime is willing to grant amnesty and allow people to leave. Will people in eastern Aleppo accept such a deal?

Haji Hassan: There was a meeting of civilians and rebels in Aleppo city today [on Monday] and everyone unanimously agreed to [the need] to secure a safe passage for civilians. There have been many initiatives lately to make this happen but Russia wants to kill everybody.

Everyone wants to leave, including fighters. Russia is not responding. Many civilians left to government-controlled areas, but many people – anyone who was engaged in activism, or politics, or had any connection to the revolution – was arrested or even killed. Ordinary civilians between the age of 18 and 40 were conscripted to military duty.

This is why people want a free passage under international protection, so they don’t get killed by the regime.

No one believes the regime; people want international protection. 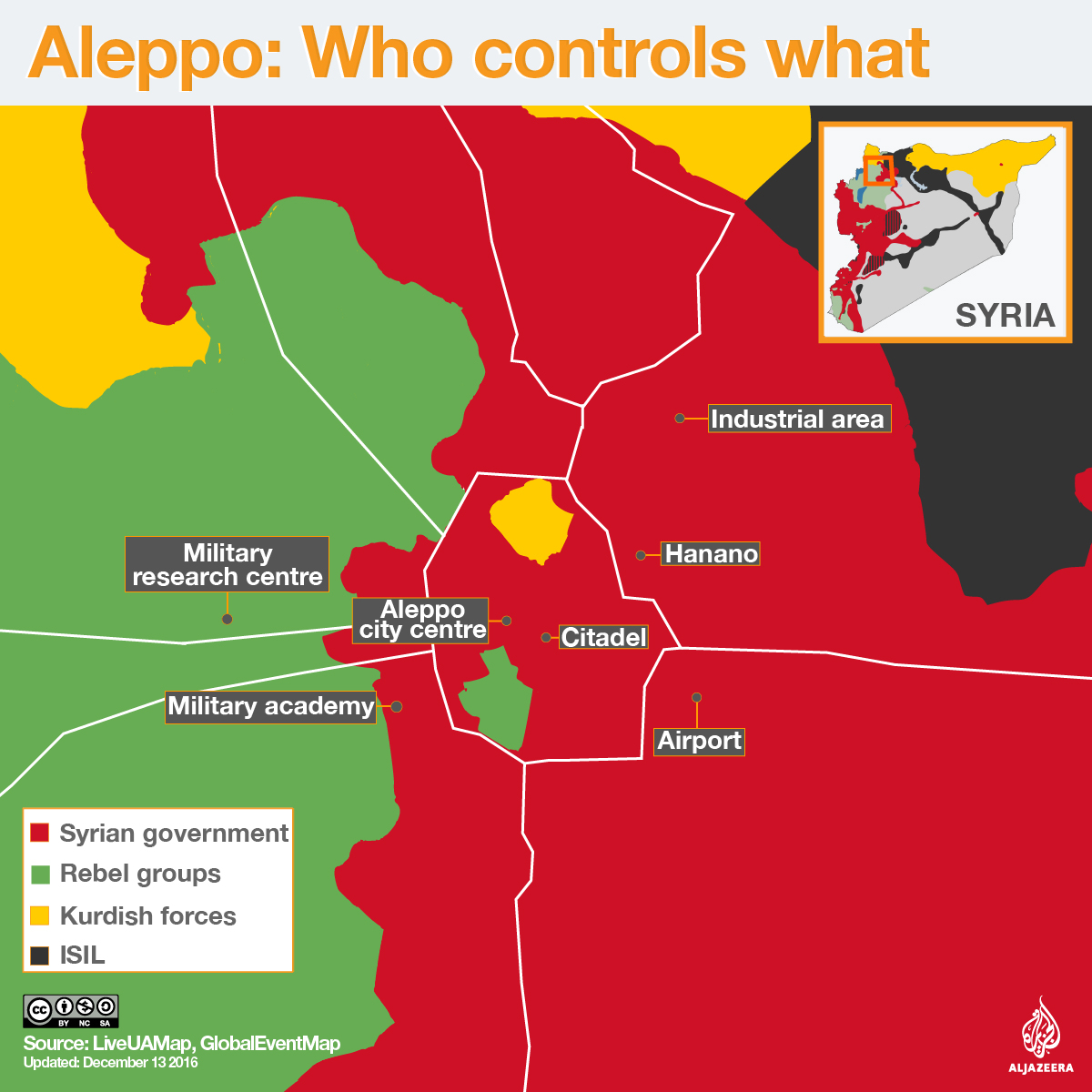 Haji Hassan: In Aleppo city, 99 percent [of fighters] are from the Free Syrian Army and 1 percent is from al-Nusra Front. Al-Nusra Front does not have any influence in Aleppo. But the Russians claim they are fighting terrorists, while they are applying the worst kind of terrorism on civilians.

Al-Nusra Front does not have a big presence in Aleppo. Steffan de Mistura [the UN envoy in Syria] declared that there were 900 Nusra fighters in east Aleppo. According to our own estimates, as civilian councils, there are up to 300 Nusra fighters. The number that was submitted to the UN was 127. Meanwhile, the number of Iranian and Iraqi [backed] militiamen besieging Aleppo is 30,000.

READ MORE: Why Syria’s Bashar al-Assad is still in power

Haji Hassan:  There were negotiations between the Free Syrian Army and the Russians regarding this topic. But Russia now wants all fighters in besieged Aleppo and not just al-Nusra Front fighters. The proposed deal was [for FSA] to ask al-Nusra Front to leave Aleppo in exchange for a safe passage and humanitarian aid entering the city. They refused.

I spoke with the United Nations today and they said they couldn’t do anything about it. I asked them to issue a statement about this but they refused. I demanded they hold a recorded session before the Russian media, in which they admit to their failure. They refused.

Al Jazeera: You were in France last week. Why did you go to France knowing very well that the international community is unable to stop Russia, as you say?

Haji Hassan: As a civilian and a representative of civilians, I came to convey the messages of the children and women who are being killed to the world. My trip was about exposing the crimes committed by the regime because ordinary people only see two sides to the war: ISIL and the regime. They don’t see that there is a civilian side to this – one that is working to attain freedom and dignity.

Al Jazeera: In a recent public statement of yours, you said the revolution will continue. How so, when Assad’s imminent victory in east Aleppo is within hours?

It is not about occupying land.

Even those who live in government-controlled areas could express their [solidarity with the] revolution. The dictator will fall and the people will win at the end.