Salt Lake City, United States – After voting for the Republican presidential candidate for the past 52 years, Utah has been labelled a battleground state and could be the scene of an Election Day upset due to the campaign of local candidate Evan McMullin.

Calling Republican nominee Donald Trump “a true threat to our country that is beyond the scope and scale that most Americans have ever seen or experienced”, and firmly disagreeing with Democrat Hillary Clinton’s liberal policies, McMullin, 40, promotes himself as an independent conservative alternative to the voters of Utah, with whom he has a special bond.

The former CIA officer-turned-investment banker served as an undercover agent in the Middle East and southwest Asia between 2001 and 2011. He was born in Provo, Utah, and graduated from a local university.

He is also a member of the Church of Jesus Christ of Latter-day Saints, whose members are often referred to as Mormons. Roughly 62 percent of some three million Utah residents considered themselves Mormon as of 2014. In 2012 the state voted overwhelmingly – 72.62 percent – for Mitt Romney, who is also Mormon.

Declaring his candidacy on August 8, McMullin has managed to appear on the ballot in 11 states, and is eligible for write-in status in 29 more. But his only real polling power so far has been in Utah, where his campaign has put most of its focus.

An Emerson College poll released on November 3 shows him at 28 percent to Trump’s 40 percent and Clinton’s 20 percent.

Jason Perry, the director of Utah’s bipartisan Hinckley Institute, says there is a large percentage of voters who do not even know who McMullin is, “but they know who he is not. He’s not Trump, and he’s not Hillary”.

With 67 percent of Utah voters viewing Trump unfavourably according to a Monmouth University poll, voting for the Republican candidate does not appear to sit well with Utah’s value-minded voters.

“This has been a reliably red state for a very long time,” Perry said, adding that, on the other hand, “people from Utah want to feel good about their vote and be able to vote their conscience”.

Perry stresses that the explanation of McMullin’s success is not as simple as him being a Mormon, like many of Utah’s voters. But part of the dislike for Trump may well come from their personal beliefs.

In particular, Mormons value strong family relations and shy away from using crude language. Something which Trump, with several divorces and lewd comments about women, might not best represent.

Becky Rasmussen, 37, of Highland City, is one such voter who could not see herself voting for Trump, in part because of her Mormon faith.

While she also sees Clinton as unfit for the presidency, Trump, she says, is “completely morally bankrupt …You see framed in his office him on the cover of Playboy Magazine”.

Rasmussen was quick to support McMullin after attending his campaign launch, and has gone door-to-door to drum up support for him.

Gary Herbert, a Mormon, was the only GOP governor to accept Syrian, mostly Muslim refugees after the Paris attacks – disagreeing with Trump over the threat they pose.

The state of Utah, he told NPR, is “reluctant to use somebody’s religion as the defining description of who can come into a state”.

When asked if that has something to do with Utah’s Mormon history, he said, “I’m sure it has some.”

Mormon pioneers fled to Utah in the 1840’s after religious persecution led to the murder of their founder, Joseph Smith in Illinois.

But Porter Goodman, 28, from Provo – who believes that voting for McMullin “is the only way to not throw away your vote” – says it is not his Mormon beliefs that cause him to view Trump as having a “lack of morality”.

“I say he lacks morality because he lies and because he abuses other people with his words and actions,” Goodman says. “Savour the magnificent irony of Trump supporters who say, ‘Yeah, Trump may be a pathological liar, but set that aside and focus on the great things he says he’ll do as president.”

And as poll numbers tell, many in Utah have been able to reconcile voting for Trump with any perceived differences in values. FiveThirtyEight, an opinion poll analysis website, still gives Trump an 84.4 percent chance of winning Utah to McMullin’s 12.4 percent.

On Tuesday, at a rally that saw several of Utah’s congressmen and senators came out against the idea of a protest vote against Trump, the crowd chanted: “Jesus is not on the ballot” and “Evan McMullin – you are not Utah’s Saviour”.

The LDS Church itself remains politically neutral, refusing to endorse any candidate.

McMullin’s campaign has caused Trump and his supporters enough concern to take notice and publicly attack him.

Lou Doubs of Fox News, who has not tried to hide his support for Trump, lashed out at McMullin on Twitter, saying, “Look Deeper, He’s nothing but a Globalist, Romney and Mormon Mafia Tool …”.

Trump himself has expressed exasperation with having to contend with McMullin’s campaign. He told Fox News last week that “he takes votes away from me, this man who I never heard of”.

McMullin replied to Trump’s remarks, saying on Twitter that “you’ve never heard of me because while you were harassing women at beauty pageants, I was fighting terrorists abroad”.

Trump supporters make the argument that voting for McMullin represents the danger of splitting the conservative vote in Utah, thus potentially allowing Clinton to take the state. But Perry doubts Clinton can win a majority and seize the state’s six electoral votes.

“The reality is that [in Utah] people who aren’t going for Trump aren’t going over to Clinton … and McMullin was able to capture this perfect storm to gain support,” he says.

It could also be said that McMullin is not taking votes from Trump, but picking up votes that would never have been cast had he not been in the race.

“I wouldn’t vote for Trump even if McMullin wasn’t running. I would simply not vote,” Brylee Reed, 22, of the city of Orem said. “McMullin is allowing people like me to feel comfortable to vote in the first place.” 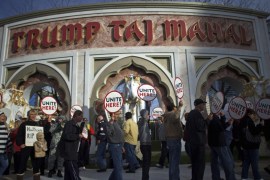 Trump would govern the US the way he ran his casino business.