Sulaimania, Iraq – Thirty years ago, Ako Ghareb joined the Kurdish rebellion against Saddam Hussein’s regime, in a bid for Kurdish independence. At the age of 23, he fled to the Jafaiti Valley and surrounding mountains in northern Iraq, where he remained entrenched with the Peshmerga for seven years.

Following the first Gulf War, Iraq’s Kurds achieved a measure of autonomy with the creation of a no-fly zone, and cemented those gains during the 2003 US-led invasion of Iraq.

With the ongoing war against the Islamic State of Iraq and the Levant (ISIL, also known as ISIS) and a crippled economy, the struggle for fully fledged Kurdish independence is today described by many Kurds as an “aspiration” or a fanciful dream. But for Ghareb, the battle continues in a different form: Back in the 1980s, his weapon was an old Kalashnikov. Today, he uses an easel and a brush.

Ghareb has found an outlet for his memories and his convictions on canvas. His watercolour paintings of the Kurakazhaw, Bargallo and Sara mountains – which saw countless battles with Baathist forces – are now on display at the Amna Suraka Museum in the city of Sulaimania.

The museum, set up in the old Baathist security prison, commemorates the struggles of the Peshmerga throughout the 1980s, as well as the Anfal mass killings.

There are scenes of Peshmerga fighters resting after a battle, along with an emotive portrait entitled “Mother of a martyred Peshmerga”. Many of these works resonate today, as some 150,000 Peshmerga form a crucial part of the ground forces in the campaign against ISIL across Iraq, most recently in Mosul.

Ghareb, who serves as director of the museum, says that his war paintings are all painted from memory.

“I don’t paint from photographs,” he says. “Each time I start painting, I am in a state of exhilaration, because it feels like I’m reliving those days. But I get emotional too, because I remember some friends who are no longer with us – who died fighting.”

Much like the work of Francisco Goya, who captured the horrors of war in Spain in the 1810s, or Eugene Delacroix‘s depiction of the Greek war of independence against the Turks, Ghareb feels that paintings can sometimes express emotion in a more powerful way than a photograph.

While many photographs were taken during the Kurdish rebellion of the 1980s, Ghareb says that his paintings convey a unique personal experience.

“Photographs and paintings serve different functions,” he says. “A photographer’s duty and an artist’s duty are not the same. Through my paintings, I want to bring back to life aspects of Kurdish history for the next generation to visualise and understand. But when I paint historical scenes or a historical figure, it’s a different feeling. The amount of research that goes into each painting, and how, in a sense, I must live that era, by the end of the process, it’s as if I have published a book.”

Through my paintings, I want to bring back to life aspects of Kurdish history for the next generation to visualise and understand.

Ghareb, 54, studied under established Iraqi Kurdish artists Ali Jola, Bakhtyar Kaftan and Abdullah Rasool, and his use of vibrant primary colours – especially in portraits and historical scenes – is reminiscent of the style of Abdul Qadir al-Rassam (1882-1952), who was once a pre-eminent figure on the Middle Eastern art scene.

In addition to his contemporary Peshmerga paintings, Ghareb has also worked on large canvases, including vibrant portraits of Sheikh Mahmoud Barzinji, a tribal leader who declared himself king of Kurdistan in 1922. Very few actual images of the Kurdish warrior-king exist, and all are monochrome in contrast to Ghareb’s colourful interpretation.

“History isn’t black and white, so why should we remember these figures in black and white?” he asks. “We want it in colour – every shade, every nuance.”

The controversial Kurdish leader is celebrated in some circles, and vilified as a traitor in others.

“We are proud of him, because he is so far the only Kurdish leader who until his dying day, called for Kurdish freedom and independence,” says Ghareb.

The historical paintings are intended for the Bardaki Sera, an old municipal building recently restored with UNESCO funding. They have also become an integral part of a larger campaign supported by the regional government and UNESCO to preserve the heritage of Iraq’s Kurdish region.

Ghareb’s paintings have been shown in galleries in Germany, China, Russia, Egypt and France, with prices ranging from anywhere between $6,000 and $30,000.

Meanwhile, as the battle continues in Mosul, is Ghareb interested in enlisting for another round of inspiration?

“I signed up, gave them my name, but they haven’t called me,” he says. “Maybe I’m too old for them. Who knows? But I’m ready to go fight again.” 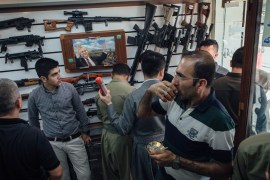 The rise of the Kurdish gun market

Since the emergence of ISIL, Kurdish arms vendors say they have witnessed a rapid increase in business.