Albacete, Spain – “You have to be smarter than her. Bullfighting is not for dummies,” shouts Sebastian Cortes, a former bullfighter and headmaster of the bullfighting school in the Spanish region of Albacete.

From behind one of the four wooden barriers in this small arena, the 63-year-old watches one of his students practise with a female calf. Jesus Moreno, 17, has sweat dripping from his forehead, but he looks at the calf defiantly.

“Don’t pull your cape away,” Cortes shouts when his student turns his back to the animal.

Today, Cortes has taken 12 of his 43 students to a valley in the countryside for a practical lesson. One by one they get a chance to practise their skills on a calf.

The students range in age and skill. The youngest, a 15-year-old who is also called Jesus, is practising with a real animal for the first time. Cristian, aged 21, on the other hand, will soon become a professional bullfighter.

While many young boys might play football after school, Cortes’ students learn how to fight bulls. Each Monday, Tuesday and Wednesday they attend classes at the arena in the centre of the small town.

There are 52 bullfighting schools in Spain, the most famous being the Marcial Lalanda in Madrid. There are, however, no official statistics on the number of students enrolled in them.

The future of bullfighting

While these teenage boys may dream of a future as a bullfighter, the likelihood of those dreams coming true seems to be diminishing. Austerity policies adopted following the global economic crisis have forced municipalities across Spain to stop financial support for a number of annual festivals, many of which involved bullfighting.

Still, aspiring bullfighters have a chance to participate in so-called novilladas – smaller fights organised especially for the novilleros, or ‘new ones’.

To become a real bullfighter, novilleros must perform at a minimum of 35 of these small-scale bullfights. In 2011, 705 novilladas were held; last year there were 536.

While some fans believe this is just a temporary crisis, caused by the country’s economic woes, finances aren’t the only obstacle for these aspiring bullfighters.

Until three decades ago, bullfighting was widely accepted as an integral part of Spanish society, but opposition to it is growing within regional and municipal governments.

The Canary Islands became the first part of the country to ban bullfighting when it did so in 1991. Six years ago, Catalonia followed suit.

Since last year’s municipal elections, the newly elected left-wing governors of the provinces of Valencia and Alicante, and the Galician city of La Coruna have discontinued subsidies for bullfights.

After Palma de Mallorca was officially declared an anti-bullfighting city in the summer of 2015, animal rights associations are now working with the regional government to ban bullfighting from the whole island.

Cortes resents this. “In my time, everyone in Spain would look forward to see a bullfight in their village or region. No one would criticise it,” he says from his small office.

But a survey conducted earlier this year by Ipsos Mori indicated that 60 percent of Spaniards disapprove of bullfighting. Alejandro Penedo, a 24-year-old social media expert from the southern region of Cadiz, is one of them. “There are so many ways in which you can entertain an audience nowadays. I do not see why you would want to maintain one that involves animal suffering,” he says.

Much has changed since Penedo’s childhood. “The region I’m from is very traditional and has always had a strong bullfighting tradition. My parents never took me to a bullfight, but they did not question it either. Neither did I. At that time, I had never even heard that some people oppose to it. “

But, today, most of Penedo’s friends disapprove of it. “We all think it is ridiculous to maintain something just because it has always been a part of Spanish tradition. I mean, 200 years ago it was also socially acceptable to hit your wife. But times change. A cruel tradition like bullfighting just does not belong in a modern society any more.”

Cortes’ students aren’t immune to the hostility many feel towards them. Moreno, who decided he wanted to become a bullfighter after his parents took him to watch some bullfights, says someone recently called him a murderer on Facebook. “I was really shocked to read such a comment,” he says. “I think that dying as an offer to the arts is the best thing that can happen to a bull.”

Elena Serrano, 16, is one of only three girls in Albacete’s bullfighting school. She believes most of those who criticise bullfighting do not truly understand it. “Most of them think I hate animals, but it’s the complete opposite. We also love animals. Sacrificing the bull is just part of the tradition,” she explains.

While the tradition of bullfighting dates back hundreds of years, Cortes says that it has undergone many changes.

He started bullfighting when he was 16. “I was lucky,” he says. “I come from a family of bullfighters. By the time I was old enough to learn, my uncle was working as a professional bullfighter. He [would] lend me all of his equipment and took me to the countryside to practise.”

Bullfighting schools didn’t exist then, so aspiring fighters had to rely on a willing professional to teach them. In this sense, becoming a bullfighter may be easier now. “Our school is free, and we provide them with all the equipment they need,” Cortes says. “We also make sure they can do at least 10 novilladas.”

But once they graduate, the young bullfighters encounter more difficulties than their predecessors.

Bullfighting is an expensive business. A traditional bullfighting costume costs at least $3,000 and organising a novillada between $2,000 and $4,000. Most aspiring bullfighters do not have this money, so without a sponsor to fund these novilladas it is almost impossible to perform.

While investing in promising bullfighters can be extremely lucrative – investors get 10 to 15 percent of their earnings, which can be up to $277,000 a fight – the uncertain future of bullfighting means that fewer sponsors are willing to take the risk.

With the number of bullfights decreasing and fewer sponsors willing to invest in young talent, competition among the students is inevitable. But, for now at least, they are cheering each other on.

“We are all aware that only a few of us will succeed as bullfighters,” says Jose Luis Jimenez, a 21-year-old student. “There are less and less shows and we are with too many.”

This is why Cortes recommends that the young bullfighters complete their schooling. He dropped out of school when he was young but says bullfighting is now too uncertain a career path for today’s students to take the same gamble. “We live in a different time,” he concludes.

The students are more optimistic.

Jimenez believes bullfighting will eventually recover. “Those who support bullfighting still outnumber those who fight it,” he says.

But many have back-up plans: Moreno intends to study economics, his classmate Sergio Atienzar, 21, is already training to become a security guard, and Serrano says she would consider a career in journalism.

Only Cristian Perez, 22, Cortes’ most advanced student, is dedicating all of his time to becoming a bullfighter. He says he feels a lot of pressure. “There are a lot of critics out there who can make or break my career,” he reflects.

He has not yet found a sponsor but is confident that he will. “I train for this every day because … I believe I have a really good chance of succeeding. Otherwise I would have already quit a long time ago.”

A week after practising in the countryside, all of Cortes’ 43 students are back in the arena at Albacete. Here, there is no calf to practise with. Instead, the students imitate the bull themselves – a student with a set of horns attached to his head bends over and runs towards a classmates who wields his cape.

Huertas is a friend of one of the students and decided to help out today. He is one of the few who make a living out of bullfighting. Still, he is anything but positive about the future for these young bullfighters.

“Out of 800 students in my school, only 11 have become professional bullfighters,” he says.

Watching those practising here today, he concludes: “It’s sad, but it is likely that none of them will realise their dream.” 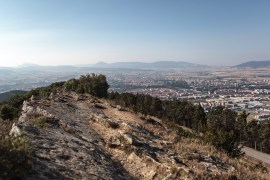 Pamplona’s Running of the Bulls

As San Fermin festival comes to an end in the Spanish city of Pamplona, the annual tradition faces an uncertain future.