Srebrenica, Bosnia – Chatting over coffee with the local Orthodox priest and other friends, and glancing up at Serbian tennis star Novak Djokovic playing on the cafe’s TV screen, Mladen Grujicic sits in the eye of a storm that is starting to swirl around Srebrenica.

He seems poised to become mayor of a Bosnian town that was marked forever by the events of three days in July 1995, when ethnic Serb fighters massacred about 8,000 Bosniak Muslim men and boys and dumped their bodies in mass graves.

Since Bosnia’s war ended later that year, Srebrenica has always had a Bosniak mayor. But Grujicic is a Serb, and like many of his ethnic kin he insists that the massacre was not genocide and the number of its victims is overstated.

While Bosnian Serbs celebrate Grujicic’s apparent victory in the October 2 local election, some Bosniaks are angered at the thought of being governed by a genocide denier and vow to do all they can to keep him from power – triggering a new crisis in a state that is still divided and dysfunctional after two decades of fractious peace.

Preliminary results on election night prompted Grujicic’s supporters to gather for a victory party at this same cafe on the main street of Srebrenica, which is now a Serb majority town of about 7,000 residents.

They were joined by activists from the ultra-nationalist Radical Party in Serbia, which is just 40km away, and as they spilled out on to the street were faced by Bosniaks angered by the triumphalist songs allegedly sung by the Serbs.

At the same time, claims of irregularities in voting and counting the ballots started to spread, and a special unit of the Bosnian Serb police that arrived in Srebrenica to maintain order moved to take control of the election documents.

Now the ballot papers are in Sarajevo, Bosnia’s state capital, 130km from Srebrenica, and the central election commission is conducting a recount that might take weeks to deliver a final result.

“These are the tactics of the current mayor to gain time and change the result,” said Grujicic of his Bosniak rival, Camil Durakovic.

“He couldn’t accept how his fellow citizens in Srebrenica judged his actions … but we will defend our victory using all legal means.”

‘Should a Serb govern Bosniaks?’

Durakovic, Srebrenica’s mayor since 2012, says hardline Serb nationalist parties in Bosnia and Serbia sent busloads of people across the border to vote and committed a host of electoral violations – charges that Grujicic denies.

Election calculations are always complex in Srebrenica, where voter lists are unreliable and ballots can swing on postal votes from the many Bosniak families who fled wartime ethnic cleansing.

But at the heart of the latest dispute is a stark question left open by the western-brokered Dayton Accords that ended the 1992-1995 war: should a Serb govern Bosniaks in a place where his people subjected them to genocide?

The potential for discord is even greater if that Serb denies that the killings constitute genocide, as was determined by a historic 2007 ruling from the International Court of Justice, the highest judicial body of the United Nations.

“This is like ethnic cleansing all over again,” said Hatidza Mehmedovic, who lost her husband and two sons in the massacre.

“We feel betrayed again by the international community. In 1995 they said Srebrenica was a safe zone and the only result was our mass graves. They said ethnic cleansing should not be rewarded and the victims shouldn’t suffer more – but we suffer constant punishment, and I wonder how much more we can take.”

Mehmedovic is a member of Mothers of Srebrenica, a group at the forefront of efforts to ensure the massacre is never forgotten, while Grujicic led an organisation that highlights the wartime suffering of Serbs at Bosniak hands.

Grujicic was 10 years old when the war began. His father was killed by Bosniaks early in the conflict and he left with his mother and sister for Serbia. They returned to Srebrenica in 1996, and found their old house in ruins.

“The problem is that one side is seen as innocent and the other is treated as criminal. It’s not objective. The result is that no one is responsible for Serb deaths – it’s as if they killed themselves,” Grujicic said.

“I’m not justifying those who [killed Bosniaks], but I don’t think genocide was committed here. I think it was a crime,” he added, echoing the view of many of his people, including the current Serbian and Bosnian Serb leaders.

Grujicic also thinks the figure of 8,000 killed at Srebrenica is “probably exaggerated” and refuses to condemn Ratko Mladic, the Bosnian Serb general whose forces overran Srebrenica and who is now on trial for genocide in The Hague.

“Some see him as a criminal, but many think that without him Serbs would have suffered twice as much as they did,” he said.

Grujicic is an ally of Milorad Dodik, president of the Serb-run Republika Srpska region where Srebrenica is located, and which along with a Muslim-Croat Federation makes up the Bosnia that was stitched together by the Dayton Accords.

‘We need all parties to resolve sensitive issues ‘

A fiendishly complex political system links the two autonomous regions with state institutions in Sarajevo, and Dodik has built his career on blocking western-backed efforts to deepen integration and blur ethnic lines.

A week before the local elections, Dodik held a referendum on whether to change the date of a controversial Bosnian Serb holiday– despite the constitutional court in Sarajevo ruling that both the holiday and the vote were illegal.

Whipped up by patriotic fervour, Bosnian Serbs rallied to Dodik in the elections, which also saw nationalists flourish in Bosniak and Croat areas, and swept several convicted criminals – including a war criminal – into local political office.

Against this bleak picture of polarisation, Dodik continues to thumb his nose at the Bosnian state and its western backers, by ignoring a summons from the national prosecutor to attend questioning on the referendum.

“My roads do not lead to Sarajevo … I am a target of Sarajevo Muslims and their politics,” he told the media earlier this week.

“I do not want to pretend to support a failed concept called Bosnia and Herzegovina,” he added, using the full name of the country of 3.5 million people and calling it “a place that nobody wants except [a] few idealists in Sarajevo.”

Dodik claims Serbs would be in danger in a unified Bosnia with a Muslim majority, and he has repeatedly threatened to call a referendum on independence for Republika Srpska if the West tries to transfer more of his powers to Sarajevo.

“More and more people are thinking in the international community that he is serious,” said Valentin Inzko, Bosnia’s top foreign peace envoy.

“His recent referendum was about opting out of the state judicial system, so it means in that area he is already working on independence,” added the Austrian diplomat, who holds the office of High Representative for Bosnia and Herzegovina.

“We have to take this seriously. For the international community there are not many red lines, but this is one.”

The European Union now plays the lead role in monitoring Bosnia, and last month it finally accepted the country’s membership application after a string of delays – and made clear that the road towards accession is long and filled with tough reform.

“We need all parties to resolve sensitive issues through a spirit of dialogue, and hopefully now the elections are out of the way this will be possible,” said Matt Field, head of the political section at the EU delegation in Bosnia.

“The EU integration process is for the country as a whole and not something that anyone can pick apart. Distractions like the referendum are harmful in terms of that process, but the EU … is clear that the whole of Bosnia will join together.”

The next major challenge for Bosnia is defusing the danger around Srebrenica, the remote and troubled town that Field calls “an enormous focal point”.

“I think Grujicic has got the message already, and the message will continue to be passed on, that if he is successful [in becoming mayor] then he has to be mayor for everyone in the town,” Field said.

Grujicic says he will not interfere with the annual July 11 commemoration of the massacre, but also insists that it is time to focus on boosting the town’s ailing economy and improving prospects for its residents.

It is a view shared by many Serbs and Bosniaks in Srebrenica and also, Grujicic says, by Dodik, who has told him that he hopes to visit the town soon.

Durakovic will not leave the mayor’s office without a fight, however.

He wants a re-run of the election, and an investigation into alleged voting irregularities and the role of the Bosnian Serb police in seizing the ballot papers.

“Someone is trying to teach us to accept the results of genocide as legitimate and legal,” he said.

“This frightens me and it makes me afraid that most Bosniaks living in Srebrenica now will, in a short time, once again abandon that dark region.” 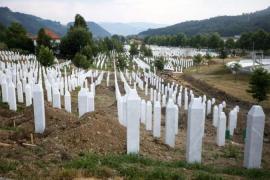 18 years after the massacre at Srebrenica, justice and reconciliation have both been difficult to attain. 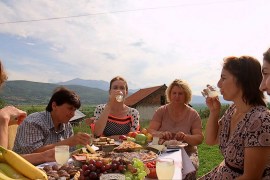 The story of how the women of a Kosovan village rebuilt their lives after many of their men were killed in 1999.