Internet giant Google has weighed into Australia’s heated debate on the timing of its national day by using an artwork focusing on Aboriginal Australians on its homepage.

Her artwork “Stolen Dreamtime” won a competition which called on student artists to produce a piece of work in response to the theme, “If I could travel back in time I would…”

The piece shows an Aboriginal mother and two children in a desert setting.

Describing her work, Voigt said: “I would reunite mother and child. A weeping mother sits in an ochre desert, dreaming of her children and a life that never was … all that remains is red sand, tears and the whispers of her stolen dreamtime.”

The decision to use a piece of art focusing purely on Aboriginal Australians comes as debate continues about when Australia Day should be celebrated.

Indigenous peoples and those against the celebrations being held on January 26, commonly refer to Australia Day, marking the start of the first British colony in Australia in 1788, as “Invasion Day” or “Survival Day”.

They say Australia Day marks the start of the mass slaughter of Aboriginals that occurred under British rule and the serious discrimination against the country’s indigenous peoples that exists to this day.

Each year, the “Australia Day vs Invasion Day” debate becomes a political issue, but so far no national government has indicated that it would be willing to change the date of national celebrations.

According to the Australian government’s human rights commissioner, when compared with non-indigenous Australians, Aboriginals die about 10 years younger, are incarcerated at a rate 15 times higher and are twice as likely to be unemployed.

In a blog post on Tuesday by Leticia Lentini, brand and events marketing manager at Google Australia, the company said it was “proud” to have Voigt’s piece on the website.

“It’s a powerful and beautiful image that is not only a brilliant artwork, but helps bring attention to the critical issue of reconciliation in Australia,” the post said. 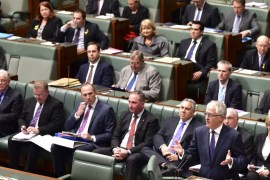 An Australian republic ‘could benefit Aborigines’

Leading academic says she backs call for an Australian head of state if sovereignty of indigenous people is recognised. 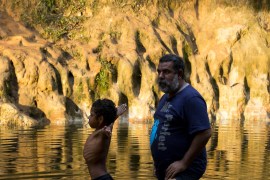 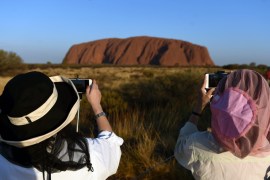