Buenos Aires has been described as a wonderland for booklovers, with more bookshops per person than any other city in the world, according to a recent study by the World Cities Culture Forum.

The Argentine capital has a population of 2.8 million, and has a ratio of 25 bookshops for every 100,000 inhabitants.

The reasons why are as complex. They include the difficulties and high cost of obtaining new technology, a postal system that many don’t trust and the exemption of books from a sales tax that keeps prices affordable.

The Argentine passion for books is also met at the annual book fair – the largest in the Spanish-speaking world and on the streets, with hundreds of stalls scattered around the city.

There are also new writers ensuring the next generation of Argentines is captivated by the written word.

“It’s been a culture for many years in Buenos Aires, people reading in subways, reading in parks, going to bookstores, going to the book fair. I think that it’s a social activity that people want to share, people want to be part of it,” writer Fabian Martinez told Al Jazeera. 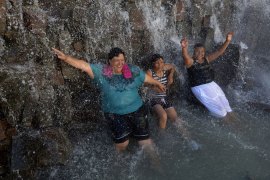 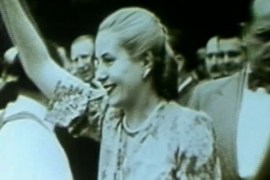 Argentinians mark 60 years since death of Eva Peron, who fought for women and the poor.