Three hours out of Moscow and down a dead-end road, is the epicentre of a strange fiscal controversy.

A small shed houses a battered metal box that contains the cash stash of the village. The village’s currency, the Kolions, was invented, minted, and printed, by farmer Mikhail Shlyapnikov.

Shlyapnikov told Al Jazeera’s Rory Challands that “people have always exchanged things among each other”.

“We haven’t created this process, we just made it digital. In Russia, for any type of village work you used to give a bottle of vodka and it was stable currency,” he says.

“So we are doing the same thing – though we don’t use vodka. We printed these pieces of paper.”

Mikheil and more than a 100 friends use the paper for loans, and to trade goods and labour with each other. It means their real money can be saved for more ambitious things, like building a village bathhouse.

Another advantage from the Kolion is that it has proven to be resilient to the storms buffeting Russia’s official currency, the rouble.

When your purchasing power is pegged to the potato, it does not much matter what is happening in the money markets.

However, the Russian authorities are not impressed by the Kolion

“They came last summer and winter and in spring. They wanted to see the Kolions so I made them to chop some wood to earn it,” says Mikhail.

“We all laughed. And suddenly a month ago I got a summons to court with scary words, like, ‘urgently withdraw this money and destroy it because it threatens Russia’s economy’.”

Mikhail’s next appearance in court is in July 1. Until then, he is staying on his farm, looking after his animals, and slightly relishing all the fuss. 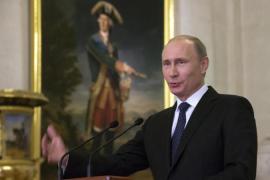 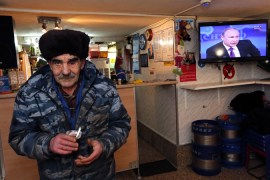