Beijing, China – On a recent hot day in Beijing’s Chaoyangmen district, two Chinese women sat quietly in large armchairs in their favourite Starbucks cafe. Like every summer day after lunch, they came here to enjoy iced caffe lattes and some air conditioning in an attempt to beat the scorching heat.

Neither of the girls could recall the last time they drank tea. Although China has been a tea-drinking nation for centuries, coffee has found a new and unexpected market here, in the world’s second-largest economy.

“Our parents don’t drink coffee at all. They are afraid it will affect their sleep, so they prefer tea,” said Wang Xiaozhe, one of the women, a 24-year-old office worker from Beijing. “But we drink coffee, coffee and coffee. Now I feel tea doesn’t have any taste.”

Like Wang and her friend, millions of white-collar Chinese have recently embraced the brown bean with an enthusiasm not seen elsewhere in developing countries. The trend has shaken up drinking habits in China, where tea culture can be traced back to at least 2,700 years ago.

China produces about 1.3 million 60kg bags of coffee a year – roughly the output of Guatemala or Costa Rica – but most of this is Arabica coffee. Most Chinese, though, drink Robusta, a lower-quality type of bean used mainly for instant coffee.

To be sure, the habit is still nascent. The average resident of mainland China only drinks four to five cups of coffee per year, according to industry sources. This compares to 150 cups for Hong Kongers and 300 cups for South Koreans.

However, according to consultancy Euromonitor International, China’s $1.9bn coffee market is expected to grow by 14 percent by 2016. Foreign players such as Starbucks, UK’s Costa Coffee, and South Korean chains Maan Coffee and Caffe Bene are opening new branches, focusing on China’s second, third and fourth-tier cities.

“This market obviously wouldn’t sustain itself if it was only for foreigners or foreign-educated Chinese. For more advanced customers, coffee drinking moved from the prestige or status to ‘yeah, this is just my daily habit’,” said Torsten Stocker, a partner at management consulting firm AT Kearney in Hong Kong.

“This is more than just a trend. It’s a broader habit that’s forming, and I really think it’s here to stay”.

The rule of instant coffee

Coffee was thought to have been introduced to China by French Catholic missionaries when they settled in southeastern Yunnan province at the end of the 19th century. Back then, the crop was cultivated on a very small scale in Yunnan by the Wa and Lahu ethnic minorities.

After Mao Zedong came to power in 1949, Yunnan continued producing coffee, but all the output was exported to the Soviet Union. The industry collapsed altogether amid the turmoil of Maoism. Coffee production reappeared, eventually, in 1988 when Nestlé, the Swiss food giant, opened a factory in China’s southern province of Guangdong with the local market in mind.

As one of the earliest entrants, Nestlé today dominates the Chinese coffee market with its ubiquitous “3 in 1” product – coffee with whitener and sugar – available in every local supermarket. According to research firm Mintel, instant coffee accounts for 72 percent of the coffee market in China.

“China used to make hot caffeinated beverages by adding hot water. China is a tea country; they now use the same method for coffee. It’s the same in the UK. Many of the ex-tea drinking nations are today big instant coffee markets,” Furniss explained.

In 1999, the first Starbucks café opened in China. The Seattle-based coffee chain, the world’s largest, now operates a network of 1,500 shops across China, which is now its second-most-important market after the US.

According to Starbucks’ “Five Year Plan”, released last December, the company plans to more than double its number of stores in China to reach 3,400 by 2019.

But Starbucks is facing competition. In Beijing, artsy, independent coffee shops have mushroomed throughout the city’s famous hutongs – traditional lanes that are now rapidly gentrifying.

RELATED: Contest-winning gay couples from China say ‘I do’ in US

This is where Zhang Lin, 46, decided to open his own coffee shop, Café Zarah, in 2007. The original, 80-square-metre locale tripled in size after recent renovations, and now boasts a private courtyard and an upper floor catering to up to 120 people.

On a recent visit, a trendy crowd of expats and locals alike were enjoying their daily shot of caffeine amid the elegant décor.

His coffee house is open Monday to Sunday from 9am to midnight. It also has an extensive food menu for breakfast, lunch, brunch, and dinner – a strategy designed to differentiate his venue from competitors and generate more cash.

“I have a lot of pressure now,” he said, citing rising labour costs – he has 18 full-time employees – and real estate prices. Meanwhile, his monthly rent increased fivefold in less than 10 years to reach 67,000 yuans ($11,000).

The company, established in 1933 in Trieste in northeastern Italy, only manages three brick-and-mortar coffee bar locations across China, out of 200 worldwide, according to its corporate website.

But it’s been developing rapidly its business-to-business branch, selling its branded ground coffee, beans, capsules, pods, and espresso machines to a network of hotels, restaurants and bars across China. E-commerce sales have boomed too, she said.

Lin predicts this coffee-drinking habit – a mostly urban phenomenon for now – will eventually trickle down to reach a broader segment of China’s 1.4 billion population, the largest in the world.

“This is of course what we are hoping,” she said, laughing. “We are looking at the future. This is just the beginning.” 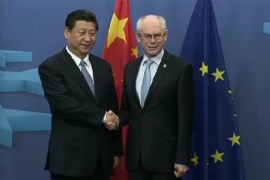