Volunteers pooled their resources, harnessed social media, and drew from their own unique skills to coordinate and bring aid and support to victims around the country.

Al Jazeera spoke to some of the individuals behind these humanitarian initiatives who were among the first to respond to people’s dire needs.

Gaire founded the website Bhukampa (earthquake) and he and eight others have amassed a network of more than 350 volunteer engineers who are carrying out visual assessments of homes, schools, and other buildings to determine whether or not the structures are safe or need to be torn down.

“We started this three days after the earthquake. We were thinking about what we could do from our part. People started sending foodstuffs and tents, but what we could do was deliver our technical skills and console the people who were outside of their houses.

We’re not funded by anyone. We don’t expect to be funded either. Engineers like us are out on our own motorbikes, on our petrol, because we’re doing it for the country.”

One of the things Nepalese young people are doing is producing hand sanitiser that’s being dispatched across the country to places where there’s a water shortage.

“We’re a loose group, not a particular organisation, NGO or anything, of youths and we have tried to work basically for relief and now we’re focusing on the second part – we’re trying to plan for the monsoon. For now we have to dispatch all the stuff that we have collected, which is mostly food and we are also trying to emphasise sanitation… In that process we came to know about hand sanitisers.

The important fact about hand sanitiser is since it’s a new product in the Nepali market … people don’t know how to use it, how much to use. Since it’s transparent and we were giving it out in bottles, there were cases of [people] mistaking it for water and drinking it.

So to avoid those things we were trying to figure out ways to avoid this, for instance, we do not [any longer] bottle it in mineral water bottles… The instructions that we give is to use half a bottle cap after touching anybody infected or injured, and after using toilets and after washing kids.”

Since the earthquake, AYON and Come On Youth Stand-up, a volunteer group, formed Act4Quake to supply relief materials. According to Kumar, Act4Quake has been the first to reach many affected villages with supplies such as tents, blankets, and food.

Kumar estimated 75 percent of their funding has come from Nepalis living outside the country. He talked about the importance of accountability and transparency.

“We have mobilised around 1,000 youth volunteers so actively there are 200 or 300 volunteers every day that are working, they are coming here and they are going to different locations.

We have good-natured young people who are self-motivated and driven, who think that they have some responsible duty to bring some changes in the country. The big chunk of money is coming from Nepali people outside.

So far the volunteers have constructed about 120 toilets in the Kathmandu Valley and in Sindhupalchowk district.

“I went to Tundikhel area [the largest community of displaced people in Kathmandu living in tents] where displaced people were staying and I asked if there were any toilets there. There was one toilet there – it was overflowing and not in any condition to use.

The people there had no other option. Girls especially came to talk to me and said: ‘It is very difficult for us… We have to wait until dark.’ I said, ‘We will make toilets here.’ We went to look for a tent and bamboo to make emergency toilets… I was very concerned about the outbreak of diseases and it was also a matter of dignity.”

The café has provided local orphanages with cooked meals on Saturdays since February, but since the earthquake its volunteers have been cooking daily and delivering food to as many as 10 orphanages.

“I’m a local boy. My village is Kathmandu… People are rushing off to Nuwakot, Sindhuli, rushing to Gorkha, my friends are rushing to their ancestral places [to help]. But you won’t believe me, but there are so many affected nearby [Kathmandu] also. Here we have been suffering.

They [children] eat it, they don’t waste it … they are hungry.”

The group set up an information centre and now runs aid missions into remote parts of the country.

“We realised we had strengths that other people didn’t. We have in our team really good communication tools such as satellite phones, we have really good trekkers, we have Mount Everest summiters.

We have people who know about how to rescue people from the Himalayas – these guys are all trained. We are just individuals, we said ‘we just want to help’ and we were there on Facebook and everyone started to connect.

For the first two, four days it was so haphazard. Now we have streamlined [things], we said we want to do missions to go up there in the mountains and see what we can do – we take all the relief materials. So that’s what our focus is on, getting relief to really far out places.” 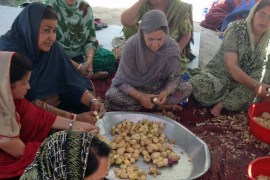 Essentials needed most after Nepal earthquake

Food and shelter needed by survivors of 7.8-magnitude quake that stole thousands of lives and devastated homes. 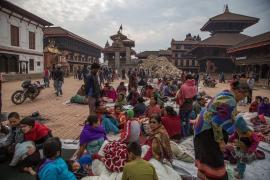