Moscow, Russia – When the Arctic Sunrise, an icebreaker with three dozen Greenpeace activists on board, approached a Russian offshore oil rig just above the Arctic Circle, its crew did not suspect they would be rounded up, branded “pirates”, and face up to 15 years in jail.

The activists left the ship on inflatable boats towards the Prirazlomnaya platform that rose from the frigid Pechora Sea like a red-and-white Lego toy the size of a shopping mall. Russian coastguards met them with warning shots and water cannon, while rig workers threw metal pieces at the activists who tried to scale the platform and attach a banner that read “Save the Arctic.”

Balaclava-wearing, gun-toting guards seized the Arctic Sunrise, and its crew spent two months in a Russian jail on charges of piracy. They were freed following relentless international pressure – but Moscow’s message was as clear and cold as a chunk of ice: Don’t mess with our Arctic plans.

The plans include staking and tapping the enormous hydrocarbon reserves in the Arctic, claiming more than a million square kilometres of the ocean all the way to the North Pole as Russia’s territorial waters, and beefing up its military presence there.

Russian officials and media celebrated the plans as their nation’s “next space programme” and “another Cold War”.

The terms perfectly describe Russia’s phantom pain over the loss of its superpower status with global and even extraterrestrial assertions.

Under President Vladimir Putin, the pain was somewhat sedated as the Kremlin rebranded itself as an “energy superpower” that dictated its political will and projected its influence via tankers and pipelines – as three-digit oil prices kept rising even higher.

Despite the six-month-long nights and nine-month-long winters, the Arctic Circle has been a strategic hot-spot for decades. It provides the shortest way from North America to Russia’s European part for ballistic missiles or nuclear submarines – and the latter that can hide from radars and satellites under thick ice.

And as global warming melts the ice cap, the Northern Passage can become a reality – allowing a shortcut from Asia to Europe that may one day compete with the Suez Canal or the Malacca Strait.

During the “fat years” of high oil prices, Moscow renewed its claims over the region it has long considered its barren backyard – and now sees as an icebox full of mineral riches.

“The Arctic is, unconditionally, an integral part of the Russian Federation that has been under our sovereignty for several centuries,” President Vladimir Putin said in 2013.

“It will remain such for the times to come.”

The areas north of the Arctic Circle hold at least 90 billion barrels of yet undiscovered but technically recoverable oil – or about one-seventh of the world’s undiscovered oil reserves, according to a 2008 US Geological Survey assessment.

Russia’s share of this bonanza is impressive – 41 percent of oil and 70 percent of gas, according to Norwegian officials.

Despite technological and environmental challenges, an international race for Arctic resources began in the early 2000s. Every country with an Arctic shelf – the US, Canada, Denmark via Greenland, and Norway – wanted a piece of the pie.

Russia seems to have the biggest piece – but still disagrees with others about its size.

Legend has it that Soviet dictator Joseph Stalin once took a ruler and drew two straight lines from the North Pole to USSR’s westernmost and easternmost territories – the Kola Peninsula that borders Norway and the Big Diomede Island right next to Alaska.

If you want to, go down and plant your flag nearby. But no one will dare do that.

And although Russia’s Arctic borders remained intact after the 1991 Soviet collapse, Moscow encountered an unexpected challenge. The international maritime law stipulates that a country can only claim 200 miles (320 kilometres) of adjacent waters as its exclusive territory.

In 2007, Russia sent an expedition to prove the “morphological structure” of underwater Lomonosov and Mendeleyev ridges made them part of Russia’s continental shelf – so that Russia’s territorial waters should be extended by 1.2 million square kilometres – and include the North Pole.

Polar explorer Artur Chilingarov led the expedition and a submarine that planted a tiny Russian flag at the sea bottom in the Pole’s area some 4.5 kilometres below the ice. After the expedition, Putin pinned a Hero of Russia medal on him.

“If you want to, go down and plant your flag nearby,” Chilingarov said in televised remarks responding to international condemnation. “But no one will dare do that.”

The steps, however, did nothing to change the North Pole’s international status.

“All the talk about us planting a little flag and getting some preferential rights for the bottom is aimed at people who do not understand anything about maritime law,” political analyst Dmitry Oreshkin told Al Jazeera.

In December, Russia unveiled the Northern Command Centre on an Arctic island that was abandoned after the Soviet collapse. The centre now coordinates Russia’s icebreaker fleet, the world’s largest, and long-range air patrols of missile-armed bombers that cover the supposedly Russian part of the Arctic.

“In 2015 we will be almost fully prepared to meet unwelcome guests from east and north,” Defence Minister Sergei Shoigu said.

Yet, the plans to guard a frozen white desert the size of South Africa do not seem feasible or even logical.

“Several outposts that have been opened with much pomp will not do the job,” military analyst Alexander Golz told Al Jazeera.

“What is the military objective of two brigades that will be deployed in the giant area between [the Arctic port of] Murmansk to [the Pacific port of] Vladivostok?”

The Prirazlomnaya platform, where the Greenpeace activists were seized, is the world’s first ice-resistant rig that weighs half a million tons and is supposedly spill- and explosion-proof, says its operator, the oil arm of Gazprom, Russia’s state-run natural gas giant.

The rig started pumping oil in April 2014, and the launch was hailed in almost military terms.

“Today, we pioneered the development of Russia’s Arctic shelf,” Gazprom’s CEO Alexei Miller said in a statement. “No doubt, Gazprom will continue the conquest of the Arctic.”

Putin symbolically commanded to start the pumping from Moscow and proclaimed it commenced “our country’s big, extensive work in the Arctic”.

The Prirazlomnaya oil was proudly christened ARCO (“Arctic oil”) and was described as similar to Kuwait’s Ratawi and Saudi Arabia’s Arabian Heavy brands.

A promotional film glorified the rig as a continuation of the USSR’s groundbreaking efforts to subdue the forces of nature.

Environmentalists and experts were less optimistic, though.

“Despite the president’s celebratory tone, this shipment is very late, it contains very poor quality oil and it poses a huge risk to the pristine Arctic environment,” Greenpeace International Executive Director Kumi Naidoo said in a statement.

“The fanfare surrounding its departure looks more like a PR stunt than a credible new source of oil.”

While state media described the rig as a made-in-Russia technological breakthrough, a former deputy energy minister claimed it took Russian engineers 15 years and $3bn to build the platform’s base that was topped with a 1984 rig hauled from a Norwegian oilfield.

“The Prirazlomnaya rig is not a thing Russia should be proud about,” Vladimir Milov said in an op-ed published in Forbes Magazine.

“It should be considered a monument to the ineffectiveness of Russia’s oil and gas sector.”

The only fly in the ointment was Gazprom’s admittance that Prirazlomnaya’s production was profitable only when oil prices exceeded $80 per barrel.

Less than a year later, the price slumped well below that. Western sanctions slapped on Moscow specifically restrict access to drilling technologies – and Russia simply lacks the expertise.

However, Gazprom said in November that it would team up with PetroVietnam for a project in the Pechora Sea, not far from the Prirazlomnaya.

“It’s been put on hold,” Leonid Grigoriev, chief adviser of the Kremlin’s Analytical Centre, told Al Jazeera. “But there is no final decision so far.” 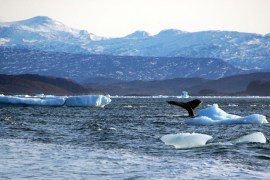 The Battle for the Arctic

Fault Lines travels to the Arctic Circle to investigate the impact a resource rush might have on local communities. 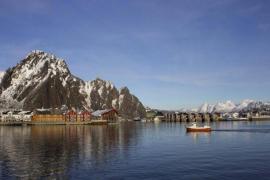 A fishy situation at the top of the world

With climate change opening up the Arctic, a pact regulating commercial fishing in the region is urgently needed. 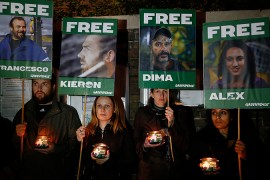 Dima Litvinov was the first of the ‘Arctic 30’ to leave Russia, with the rest expected to follow in the coming days. 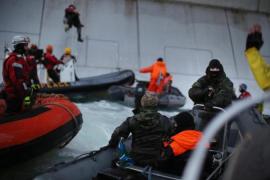