Beirut – In the early hours of the morning, Lebanese artist Jad El Khoury, who goes by the name Potato Nose, entered the carcass of Beirut’s abandoned Holiday Inn through the military base that now occupies the ground floor.

He climbed the 26 flights of narrow service stairs, then descended down the side of the building on ropes. Over the course of the next two hours, he painted a series of cartoonish, blue-and-white creatures on the building’s facade, composing them around the bullet holes and craters caused decades ago by shelling.

When Beirut residents awoke to discover Khoury’s artwork last month, they responded passionately, with many expressing anger at his alteration of the landmark building.

“It was really surprising,” Khoury, 27, told Al Jazeera. “But I understand that many people will see it like I am doodling over history, which is not the case. I opened up a debate that was already there – should we fix all the scars of the war, or should we keep them?”

OPINION: What we didn’t learn from Lebanon’s civil war

For 40 years, the skeletal remains of the Holiday Inn have towered over central Beirut, an ever-present reminder of Lebanon’s devastating 1975-1990 civil war. A symbol of cosmopolitan prewar Beirut, the derelict, shell-scarred building now stands incongruously beside the glitzy downtown.

A month earlier, Khoury had painted similar artwork on another war-damaged building only blocks away, as part of a project called War Peace that aims to beautify what he sees as ugly remnants of the civil war. His previous work received little public feedback, but this time, the response was overwhelming, highlighting the symbolic significance of the Holiday Inn as a marker of the 15-year conflict.

This month, the controversial graffiti was painted over, leaving the building covered with oblongs of white paint.

A distinction has emerged between those who see the Holiday Inn as an unofficial memorial for a war they feel must be acknowledged, and those for whom it is an unavoidable reminder of a conflict they would rather forget.

“I know the Holiday Inn’s history and, as an architect, it’s such an iconic building,” Ieva Saudargaite, the Lebanese-Lithuanian architect and photographer, told Jazeera. “I did a photo series about all these, abandoned buildings, and it’s like a sacred monster, in the sense that it holds so much meaning in history but it talks about such a horrible past.”

Saudargaite criticised the decision by Khoury – who received permission from the Ministry of Defence to access the building – to paint cartoonish figures on the hotel.

“I think the Holiday Inn deserves something that has meaning, layers, something specific to it … It’s a beautiful and very imposing structure,” she said. “[Khoury’s work] is like a tag. Some people called it vandalism and I kind of agree, although it was vandalism with consent, which is really strange. That’s the kind of thing that would happen in Lebanon.”

But Lina Hassoun, a photographer who studied interior architecture with Khoury at university, disagreed with perceptions of the Holiday Inn as a monument.

A journalist who entered during the battle said that not only was the elevator working, but the music in the elevator was still playing.

“It was a tool that killed many people,” Hassoun told Al Jazeera. “I don’t see anything sacred or holy in it. We cannot compare this building to monuments after World War II, for example … I took pictures of it for a project, and when I pass by it, I feel the negative energy. I only like to see positive things, and Jad’s doodles are so fluffy and funny and funky.”

Designed by André Wogenscky, a student of French modernist Le Corbusier, along with Lebanese architect Maurice Hindieh, the Holiday Inn was built between 1971 and 1974 and opened to the public just months before being caught up in the conflict.

Between October 1975 and March 1976, rival militia groups fought for control of the Holiday Inn, which served as a notorious sniper’s nest during months of fighting that became known as the Battle of the Hotels.

For decades since the war ended, the building was in limbo due to a disagreement between the two shareholders in the joint-stock company that owns it, Saint Charles City Center. The Lebanese shareholders, property developers Compagnie Immobiliere Libanaise, wanted to renovate it, while the anonymous Kuwaiti shareholders wanted to demolish it.

Last year, Saint Charles City Center went into liquidation and announced that the Holiday Inn would be sold at auction. Architect Roland Abdeni, the chief executive officer of Compagnie Immobiliere Libanaise, told Al Jazeera that the date of the auction had not yet been set, but his company hoped to ultimately buy the building and renovate it, constructing apartments, offices and retail outlets.

“It’s one of the only Le Corbusier-inspired buildings in Beirut,” Abdeni said. “I think in Paris it would have been listed. Corbusier’s chief of staff was the main architect … So I think it’s worth saving.”

Gregory Buchakjian, the art historian and artist, who spent six months researching the Battle of the Hotels, describes the Holiday Inn as “an accidental monument”.

“It’s a building that has a very strong presence,” Buchakjian told Al Jazeera. “It’s not a place of massacre like Karantina or Tel al-Zaatar, but these hotels were representative of the cosmopolitan Beirut, so their destruction was a very strong trauma … I have all these images of the Holiday Inn burning. It burned for months. It’s so big that many fires happened in the hotel, and meanwhile other parts were still intact. A journalist who entered during the battle said that not only was the elevator working, but the music in the elevator was still playing.”

Buchakjian, who is working on a series of photographs taken in abandoned buildings in Beirut, was one of the first people to comment when Khoury posted images of his artwork to Facebook, writing: “This is an outrage! An outrage to Beirut, an outrage to memory, an outrage to everything!”

“The reaction I had on Facebook was spontaneous,” he explained. “One commenter asked me, ‘Why do you accept the paintings on the Berlin Wall and the separation wall in Palestine and not here?’ But it’s simple. The Berlin Wall is urban art. It’s graffiti, and the artists did not ask permission from anyone … What’s irritating is that this building is completely inaccessible. It’s very difficult to enter, and this guy has the permission, and he gives himself the privilege of painting it from top to bottom. Street art is not an art of the privileged.” 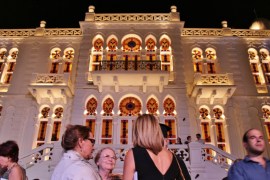 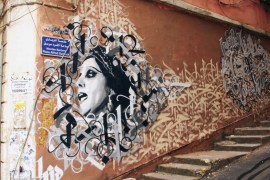 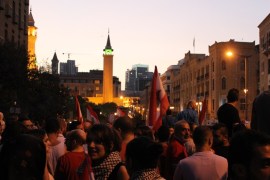