Las Vegas, United States  Donald Trump likes to talk. Or perhaps to be more accurate, he likes people to listen.

For more than an hour, he stood on the stage at a Las Vegas hotel and returned to themes, which have seen him develop a commanding lead in the race to be the Republican presidential nominee.

As they arrived, people spoke glowingly of the billionaire businessman.

“I love him,” one woman told me. “He says what other people won’t and he will bring change to Washington.”

“I started off kinda doubtful,” said another man. “But look at the other choices.”

“He’s the best out there,” said a middle-aged man.

‘We ain’t going to take it’

The music played before a Trump rally wandered a bizarre path – from Adele singing a James Bond theme and Elton John’s “Tiny Dancer” to Pavarotti.

He has tried a number of entry songs. But he ran into problems when the artists he selected told him he had to stop, because they simply didn’t support anything he said. Now he comes on stage to “Twisted Sister” and “We ain’t going to take it”.

Trump talks without notes, which means sometimes he wanders through topics which are seemingly unconnected – but he reads his audience and delivers the lines he knows will bring cheers.

In Las Vegas, he brought on a father whose son was “shot dead, killed in the street by an illegal immigrant”. As he explains this is why he supports Trump’s stand on immigration.

A voice shouts from the crowd: “It shows why we need gun control.” The discordant voice is quickly shouted down and hustled from the room by security.

The media are penned in the centre of the room and unable to get to the disturbance.

But Trump says the media are only interested in the protesters, ignoring the fact the cameras have been trained on almost all of his utterances for the past five months.

He says they won’t show the size of the “massive crowds” he’s attracting, but suggests that there are several thousands in the hall when there are probably about a thousand. He criticises the media, which is an old trick for the Republicans.

One man shouts at me: “You’re jerks.”  He’s well-dressed and seems respectable. So I ask if he means I’m a jerk. He looks slightly embarrassed: “Well, maybe not you.” I thank him and tell him he’s entitled to his opinion.

We try to leave the pen, but a Trump campaign volunteer insists we must stay “because the Secret Service insist”, when in reality it’s not the sort of image they want tied to the event.

It’s not the last disturbance of the evening. There are further shouts of “Dump Trump” and boos and shouts over immigration policy and Trump’s plan to ban all Muslims from entering the US “until the leaders sort things out”.

One report suggests a Trump supporter during one exchange shouted “Light the m—– —-er on fire”, to a protester who was on the ground and was trying to stop security grabbing him.

Trump took it all in his stride. He continued to talk, but people who seemed so energised when they arrived had started to drift away. Trump may have sensed he was losing the room. He reminded people to register to vote, insisted he was going to win and left the stage to applause.

I spoke to one man – a Democrat – who came to hear and see what the Trump phenomenon was all about.

“It was fascist, it was hateful and it’s a sign of the underlying racism in US politics in 2015,” he said.

But others loved the message Trump brought.

And one Latino woman told me: “He tells the truth, people like that and it’s why he will be elected.”

Donald Trump remains the man the others have to beat. 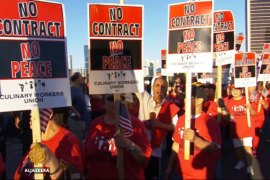 US hotel workers trump up support for better wages

Ahead of the final Republican debate, staff of Las Vegas hotel owned by Donald Trump demand increase in minimum wages.