Aleppo, Syria – Ahmed Subi is only 13 years old, but, in many ways, his childhood ended three years ago. He lives in Aleppo, Syria’s largest town.

In 2012, the Battle of Aleppo, fought between forces loyal to the government of Syrian President Bashar al-Assad and various rebel groups, began.

That was when Ahmed stopped attending school full-time. Instead, he had to work alongside his brothers in a restaurant in order to help support his family. When his father, Tofi, was killed in a government air strike, the financial burden on the siblings grew.

Now, he studies for half of the day and works for the rest. It is a life somewhere between childhood and adulthood: filled with the responsibilities of an adult, but also the simple pleasures – cartoons and candy, in Ahmed’s case – of a child.

“I’ve always loved to learn,” he says, standing on a street in downtown Aleppo.

Ahmed wants the education he does receive to be put to good use in the future. “I want to be an engineer and rebuild the country’s buildings and bring back life to my city that I love,” he says.

From his bedroom window he sometimes sees children playing.

He says a government sniper used to shoot at the window. He doesn’t know why he stopped.

What one possession means the most to you?

My favourite possessions are my books. But I don’t have time to read them and I don’t have any books that aren’t from school.

What is your happiest memory?

What is your saddest memory?

My saddest memory was the passing of my father after barrel bombs struck our home. I was at my aunt’s house for a visit with my mum.

We heard a loud sound as the explosion took place and went home where my father was. He died in the bombing and I never saw him again. We didn’t even get the chance to see his body or bury him.

What is your favourite place?

My favourite place is my school. It’s the only place where I feel great and learn new things. The days when the school was closed due to the regime’s bombs were some of the hardest in my life. But now the school is open again and I’m very happy.

Who is your favourite cartoon or television character?

I really like the show Detective Conan because he teaches me to look for and find out things that are hard to solve. I also like his adventures where he searches for criminals and arrests them.

What do you worry about most?

The thing I worry about the most is the plane bombings that may kill me or my family, or make me alone or lose one of my limbs.

If there was one thing you could change about the world, what would it be?

If I could change one thing I would ban the use of weapons that destroy everything and are used to kill people. Maybe then people could live in peace.

Yusuf Fathi is an 11-year-old from Aleppo. He is a friend of Ahmed’s. He spends most of his time at home. His family doesn’t send him to school, and only rarely allows him to play in the neighbourhood with the other children.

They fear the bombs that took his youngest brother’s life. Yusuf, too, is afraid of the bombs and the planes that fly overhead.

His father in particular is worried about his son’s safety. Last year, bombs struck Yusuf’s school, killing some of his friends and teachers.

Now, instead of going to school, he helps his mum around the house, watches television and plays with his little brothers. He is only allowed to leave the house with his father.

Like Ahmed, he has a love for learning and an interest in Japanese cartoons. Sometimes he plays in the street with Ahmed and his other friends, but not often.

From his bedroom window, he watches his friends going to school – and wishes he could join them.

What one possession means the most to you?

My favourite possessions are new clothes, especially during Eid. I haven’t seen new clothes on Eid in four years.

What is your happiest memory?

My favourite memory was when we celebrated Eid with our whole, big family.

What is your saddest memory?

The worst memory was when a plane bombed our home and trapped us under the rubble. We got hurt, but made it out alive.

What is your favourite place and why?

My favourite place is my garden. I like my neighbourhood too.

Who is your favourite cartoon or television character?

Goku from Dragon Ball Z is my favourite because he’s a strong person and has the fighting skills to fight any evil person for the sake of good.

What do you worry about most?

Something that worries me a lot is the fear of death at any moment, and especially the sound of a plane or an alarm.

If there was one thing you could change about the world, what would it be?

If I could change one thing in the world it would be ending wars and living in peace without bombing, clashes or the sound of planes. And we could go to school and play without the fear of planes or missiles or anything that could kill us. 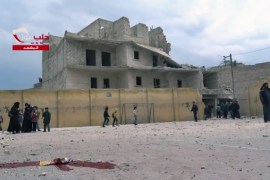 Several villages in Aleppo province near Turkey fall to armed group, as US accuses Syria of allowing ISIL advance. 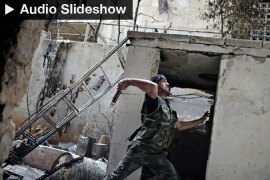 Scenes from a Syrian city under siege

An audio slideshow from Aleppo by a photographer who spent two harrowing weeks dodging bullets to cover the conflict.