Following the carnage in and around Paris Friday night when eight assailants used explosives and automatic weapons to kill at least 129 people, recent warnings by security officials over the spiking threat of attack amid budgetary austerity have assumed a particularly grim prescience.

Those warnings noted the rapidly increasing number of recruits to the ranks of groups like the Islamic State in Iraq and the Levant group (ISIL) – many of whom who have travelled to and gained battle experience in Syria or Iraq. But the French security officials also stressed that sharp cuts in public spending have restricted the means available to security services those recruits under surveillance.

In private conversations during the 11 months between January’s Charlie Hebdo strikes and Friday’s attacks – for which ISIL has claimed responsibility – some members of France’s overloaded security services saw a new wave of attacks as inevitable.

“More and more cases [of identified radicals] arrive every day, and we’re already unable to maintain surveillance of people flagged as potentially dangerous,” a visibly exhausted and enervated senior French security official confided earlier this autumn. “Meanwhile, politicians of all stripes are imposing austerity that cuts into our resources the same as it does hospitals and schools. You can’t constantly try to do more with less without something eventually breaking down.”

The strain on French security efforts has been evident for some time. In the wake of the January assaults in Paris that left 18 dead, it emerged that all three of the perpetrators had previously been put on watch lists as potential threats. Officials later confided that the growing number of such suspects had required surveillance to be prioritized on the basis of risk assessment, which may have helped the trio to plan and execute their attack undetected.

Mohammed Merah, who killed seven people during a 2012 spree in and around Toulouse, had also been previously identified by intelligence authorities, but was ultimately not viewed as sufficiently dangerous to shift surveillance resources.

“Even at the best of times it’s almost impossible to watch everyone considered a threat,” the senior French official said. “But these are very bad times getting worse, with our ability to respond restricted.”

Following the January attacks, Prime Minister Manuel Valls vowed that countering threats – and providing forces the means to do so – remained a top priority. And, indeed, a far larger police and military presence in Paris and around France has been visible since then.

Before Friday’s attacks and President Francois Hollande’s imposing state of emergency measures, plans had already been made to increase that deployment and resume border controls ahead of the France-hosted United Nations climate summit this month.

Yet, the rate of self-recruiting through web resources by young people in France – and the flow of recruits to and from Syria and Iraq – has some experts fearing that the nation’s current security assets are increasingly overmatched. The struggle to keep pace with returned fighters preparing strikes is compounded by groups like ISIL designating France their top target, due to its support of US military operations and conflicts with its own Muslim community over issues like the headscarf in schools.

“We have become public enemy number one for Islamic State,” Marc Trevidic, until recently France’s leading investigating magistrate in its anti-terror services, told Paris Match last month. “Given the scale of the threat and diverse forms that it can assume, our counterterrorism system has become permeable, weak, and is no longer as efficient as it was before.”

Meantime, with the French abiding by German urgings to slash public spending and battle budget deficits, Trevidic says the military action in the Middle East taken by France’s leaders against ISIL only creates more trouble for swamped domestic security forces.

“The politicians strike military postures, but they have no long-term vision,” Trevidic said. “We judges, [intelligence] police, the people on the ground are completely overwhelmed. We’re heading for a catastrophe.”

Fortunately, French authorities still stop far more plots than they miss, but even one successful attack like Friday’s will always overshadow the more positive side of the ledger. Unheralded, too, are operations that uproot strikes that may be carried out later by more furtive authors – as may have occurred Friday.

In his comments several weeks ago, the senior French official confided that a group was thwarted last year by security forces as it sought to deploy perhaps a dozen commandoes in killing sprees in several French localities.

“Preventing those kinds of plots is thankfully still the rule, but the exceptions we’re likely to suffer keep me awake at night,” he said with what turned out to be tragic precognition. “Unfortunately, the question isn’t whether another attack is committed, but when – and how bad it will be.” 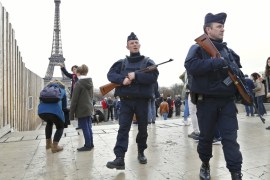