Attathode, Kerala – The road into the forest is well paved: it’s on the route of a popular holy pilgrimage.

Crude flags and a polythene bag on a stick mark tribal settlements along the way.

The colonies are deep into trees along steep slopes to stop elephants from trampling on their makeshift homes.

Most of these tribes are nomadic, living on the plants and animals in the forest and collecting wild honey to sell.

They also get rice rations and limited supplies from the government.

We spend a couple of days at a new school that for many of the children, when it opened, was the first time they sat in a classroom.

They are boisterous, excited and seem happy to be there.

The day we arrive, uniforms discarded, they are in their best clothes. It’s a special day – the Kerala tribal minister is coming to inaugurate their first water mains.

Classes are disrupted with preparations for the event.

They are curious and eager to speak to us – until the cameras turn on. Then they become shy, whispering to each other.

We abandon our attempts to interview them.

I spend the afternoon chatting to the children who are amused at my foreign-accented Malayalam.

Soumiya, whose home we visit in the report, is one of the older children in the school, but she doesn’t know her age.

Soumiya wants to know if I have a TV in my home, and is impressed when I tell her I do.

I tell her that I am on TV actually.

She is surprised and asks how I got into the television box.

The school has had a rocky start and is still very much a work in progress.

Many here say it would not have survived even its first month had it not been for the relentless campaigning of the district magistrate, S Harikishore.

He fought to get a promised government-funded jeep to pick the children up from their various forest settlements.

It makes several trips, each time driving up to 25km from their homes to the schools and back.

He pushed to get three meals a day in school. In India, government schools are only required to provide food once a day.

Harikishore tells us there are many challenges, the biggest one being that, as nomadic tribes, their families often pack up without notice, and go deeper into the forest.

But he is hopeful: “We will not stop with the small project of opening the school and relax, our focus is also on the families. School is just the beginning of their education.”

He says the next step is to educate the parents, though convincing the mostly illiterate forest dwellers to sit in a classroom regularly will prove difficult, if not impossible.

There is no question the students are fond of their headteacher Ashokan D.

He left a secure job at a popular high school in town to undertake this tiny tribal school as his project.

It’s been an uphill battle to get the students to attend classes, obtain supplies and secure teachers.

The school opened three months ago and already its future is in question due to lack of funding.

The four teachers and staff, including Ashokan, live far from the remote school, and with no residential facilities, he often spends the night in his office.

However, he has no regrets and feels the school has scope.

“If all the departments of government and other agencies support this school, then there would not be any problems for the coming years,” he says. 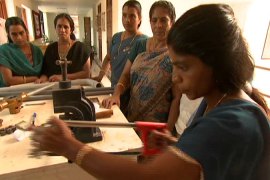 Women in southern Indian state learn art of plumbing to fill skills vacuum left by men who have migrated. 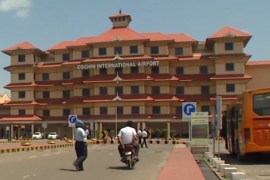 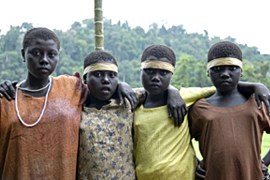 India election candidates in the Andaman Islands kick up row by promising to ‘modernise’ primitive tribes.