Communal clashes and anti-Muslim attacks by Buddhist mobs have torn apart communities across Myanmar over the past three years.

It began in the western Rakhine state in 2012, before spreading to Meiktila in the country’s “golden” heartland, and from there through Oakkan into Lashio – a town not far from the border with China. Kanbalu, Thandwe and Mandalay were all affected as well. Conservative estimates suggest that hundreds died.

I went to the prison ... it was clear for me according to those testimonies that it was organised

Few are better qualified to speak about the anti-Muslim violence than Tomas Ojea Quintana. Between 2008 and 2014, he was the United Nations Special Rapporteur for Human Rights, using his legal expertise to investigate, analyse and survey abuses taking place during that period.

The Argentinean lawyer told Al Jazeera that the events formed a “clear pattern”, indicating that many were organised.

“I remember the case in Lashio,” said Quintana. “I went to the prison and talked to some of the people, the Buddhists who were arrested, and it was clear for me according to those testimonies that it was organised.

“These were people [from] out of the town. They were not from Lashio. They were brought to the area and suddenly they were asked to start this kind of violence,” he adds.

Who was behind it? His interviewees were too frightened to say, but testimonial and documentary evidence gathered by Al Jazeera’s Investigative Unit appears to provide an answer.

While not conclusive, it points in one clear direction: towards arms of the state that appear to have deliberately stoked tensions between Buddhists and Muslims, in part by outsourcing anti-Muslim violence and provoking a proxy war between two peoples.

Two organisations – the “969 movement” which rose to international prominence in 2012, and the Ma Ba Tha, an ultranationalist pressure group which has all but superseded the former – have been accused of inciting violence.

Islamophobic preachers have visited towns and circulated hate materials ahead of sectarian conflict in several areas, according to reports.

The frontman, Ashin Wirathu, a Mandalay-based monk known for his anti-Muslim sermons, has been singled out. Some veteran Myanmar analysts say he has close ties to President Thein Sein and his ruling, military-backed Union Solidarity and Development Party (USDP).

Monks say Wirathu and, in one case, senior government ministers, attempted to recruit them to an embryonic version of the Ma Ba Tha.

“When I got out of the prison, General Myint Swe and Hla Htay Win and … Minister U Zaw Aye Maung met with me,” one source, who requested anonymity for his own protection, told Al Jazeera.

The team comprised of the chief minister of Yangon division, an ex-military commander and an ethnic Rakhine representative.

RELATED: Breaking down genocide in Myanmar

They proposed the monk to tour the country freely preaching on the virtues of “race and religion preservation” against a looming Muslim threat, a major boost to a monk who had previously faced harsh restrictions and poverty.

“If I did that, they would let me preach in various townships. If I preach, I get money,” the source added.

Two other sources describe approaches by Wirathu that involve an offer of regular payments into their bank accounts and resources to spread their message online. Both said they understood the government to be backing him.

Adding to the evidence is the testimony of an ethnic Rakhine with extensive business and political connections, who spoke on strict condition of anonymity. The source told Al Jazeera payments were made to anti-Rohingya activists and there were links between senior political figures from the USDP and violent groups.

“When we look within the state level, there is chief minister of Rakhine state,” says the source, adding that “he picked out so many activists by giving good cash in kind as an incentive.

“He has a kind of charity fund. He can use that money without any accountability to manoeuvre and control the situation,” the source continued, alleging that the chief minister sponsored mass anti-Rohingya, anti-UN protests.

The Chief Minister of Rakhine has a kind of charity fund ... He can use that money without any accountability to manoeuvre and control the situation.

These allegations, while unverified, fit within a body of further evidence that suggests state organisations may have sanctioned anti-Rohingya violence.

Interviews conducted by the International State Crime Initiative (ISCI), an academic research centre based at the University of London, were shared with Al Jazeera.

Ethnic Rakhine sources told ISCI that during the violence of 2012, they were sent to attack Rohingya settlements on the order of local officials.

“Every house had to [send a fighter]. If there [were] two people, one had to stay and one had to go. The administrator made this rule,” one interviewee said.

Others said that transport and free meals were arranged. At one point, a witness described how he consulted with a police officer and senior military figure about the advisability of one such assault.

“The police came, as well as a three-star general,” the witness said, according to the ISCI. “I told the police that we wanted to go back and fight. [The police] authorised us to attack the Muslim village after checking with us if we thought we had enough men to win, once we confirmed we did, they withdrew.”

Testimonies claiming close cooperation between state officials and those responsible for violence in 2012 were also cited in a private United Nations report which investigated the riots.

The paper refers to evidence “implicating security, political and religious representatives in the planning and perpetration of the violence,” and that “consistent accounts from Sittwe and other areas highlighted that Rakhine from other areas were brought in to reinforce local communities prior to attacks.”

It also records allegations of mass rapes and other crimes that were not addressed in official commissions of inquiry, despite the fact that the document was circulated among top government ministers.

The evidence in the forms of confidential documents and witness testimony, when assessed together, suggests that the phenomenon of anti-Muslim violence is more than simply spontaneous. 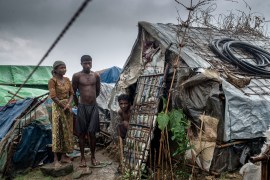 Documentary shows evidence of government-led persecution of the Rohingya people. 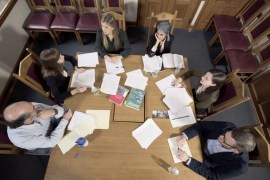 Breaking down genocide in Myanmar 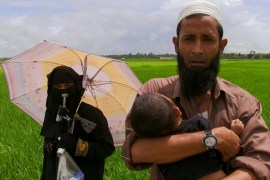 Promoting the “Muslim threat” in Myanmar

Al Jazeera uncovers evidence of a deliberate government strategy to incite fear and hatred of the Rohingya minority.