Mexico City – The “Countdown to 2015” report, a mammoth study of 75 countries that account for about 95 percent of all maternal and newborn deaths was released on Monday at the Global Maternal Newborn Health Conference in Mexico City.

The landmark report, the seventh and last in a series of reports released over a 10-year period, tracks progress for maternal, newborn, and child survival across the globe, using United Nation’s Millennium Development Goals (MDGs) as a gold standard for progress.

The report, compiled by a group of researchers, activists, and government officials in a remarkable multi-stakeholder initiative, found that maternal and child survival had improved by 50 percent since 1990.

But the report also found that just four countries out of the 75 profiled were able to meet both MDGs related to infant and maternal mortality. Moreover, far too many children were still battling malnutrition, suffering from hunger and dying from preventable conditions like diarrhoea.

Al Jazeera spoke to Zulfiqar Bhutta, co-chair of the Countdown to 2015 Initiative, about the findings, and the lessons learned in understanding this story over the past 10 years.

Al Jazeera: You were with Countdown since 2005. Tell us about the report and your journey covering this issue.

Zulfiqar Bhutta: It started off as a very humble effort by a group of people who wanted to look at child survival. It rapidly expanded to include maternal health as part of this in 2005, when Countdown was formally launched. It has been a fabulous journey. We learned as we went along, built our coalition, kept the standards of transparency of high-quality data and ready availability of information. And all of this has been done with people doing it on their own time. People didn’t do this for a salary. And it’s because we are principally committed to what we set out to do. This is why I say it’s a remarkable journey because it was with people who felt passionate about this issue. And we are looking forward to seeing a new generation taking this forward.

Al Jazeera: This was a wide-ranging coalition. Governments, researchers, activists. What kept you all together?

Bhutta: A common mission. What binds people together is a common vision and mission. So, the end point of ending 2015 comes with some measures of success – some measure of progress – that may not be at the end point yet, but are in the right direction. But also, failure – which are important in terms of learning how to do better. What has kept us going has been principally the vision that we can make this world a better place for our children and their children.

Al Jazeera: What about the difficulties in holding governments or actors to account?

Our approach has been to hold [up] the opportunity countries have for doing better. The vision of being able to stand shoulder to shoulder with their colleagues in terms of having achieved something – this is why I mention the example of Bangladesh and Nepal – here are two countries who have less resources than others [but] have done better than many other peers. Does that mean we go to the others and call them villains? No. What one does is to work with them to see what their difficulties are. What are the issues they need to bring forward? Sometimes the issues are hard. Sometimes, it’s just not the same context. For instance: It would be very unfair to compare Pakistan to Bangladesh. The former is fighting a war, an insurgency, has major geographic challenges – so understanding these challenges are a very important part of our work.

Al Jazeera: To the report: India and China have done tremendously well over the past decade in improving the health of mothers and newborns. How?

Bhutta: China has been making progress, even before Countdown came along. But they have had the economic resources to do so. But their challenges are different. Their challenges are more related to socioeconomic upheaval, sustainability, population migrations, rural to urban [divides], and reducing the disparities of various parts. There is not one China; there are many Chinas. There is a China where statistics are comparable to their neighbours – eastern side, western side, Xinjiang and others. In India, it has been very much the fact that there had to be a decision in making this a priority at the national level. India is slow to start, but it’s a giant. So when it starts, it does things at scale. I am very confident that India will do [more]. They don’t have the same challenges as Pakistan or Afghanistan have in terms of conflict. I am even confident that Pakistan and Afghanistan will make progress.

Al Jazeera: What about countries like South Africa and Nigeria. What excuse does South Africa have in failing to meet the MDG targets set out to reduce maternal and infant mortality?

Bhutta: None. South Africa has no excuse. Sure, they have made some progress. There has been a lot of improvement. HIV was a big barrier. You know, for almost a decade, South Africa denied that the problem existed, and HIV decimated MNCH [maternal, newborn, and child health] in South Africa. Now that things have turned, it will take a few years for interventions and strategies to take effect. I am also confident that South Africa will pick up. Nigeria – when it puts its mind to it – when it’s able to reach [out] to populations that are not being reached, like the north … the conflict areas – it can move mountains. Look at what it has done with polio. Just two years ago, it was a basket case for polio. Today, Africa is polio-free because Nigeria is polio-free. If they can do that around reaching the same populations where Boko Haram was such a barrier just a year or two ago, I hope the government will continue its focus and continue to do things on the shoulders of immunisation strategies.

Al Jazeera: There are so many variables when it comes to health. Is there one issue in particular that, if addressed, can shift the reality?

Bhutta: There is no magic bullet. The whole issue of social determinants is extremely important. But if you aggregate the gains, it would appear that half of all progress in maternal and child mortality, at least, is by strategies and interventions and change that comes outside of health. Things like the environment, education, empowerment, gender issues – [they have] nothing to do with health. Rather, it has to do with society’s determination that every life counts. So half of it is outside of health, but [the other] half of it is within health. There are strategies within health, which are not only evidence-based things that you need to do, [like] the fact that children with diarrhoea shouldn’t die because they should receive ORS [oral-rehydrations salts] or children with pneumonia shouldn’t die because they should receive antibiotics. But then, how do you make those available to those who are completely outside of the safety nets – children living in slum populations, indigenous poor, marginalised ethnic communities, conflict? Those are the real challenges where you cannot get health interventions in without delivery strategies. So we are learning as we go along.

Al Jazeera: So we are talking here about a transformation of society.

Bhutta: Societal transformation also needs solutions that come from the health sector. Over the past 10 years, we have seen approaches move beyond doctors. Africa would not have made progress if we did not invest in the role of community health workers. These [are] transformational strategies to reach the poor, which are dependent on task-sharing. Those strategies are very much part of the agenda of implementation. I would say a combination of addressing social determinants … [and] things within health – but not just evidence-based interventions … also the way to deliver them. Linking maternal child health to social safety nets – things that reach marginalised populations who cash transfers – it’s all about reaching poor people.

Al Jazeera: So this would mean universal healthcare as well?

Bhutta: Universal healthcare in Mexico was all about ensuring that health was a human right, and it got to people who needed it as a matter of right.

Al Jazeera: So you are talking about a particular economic outlook?

Bhutta: It is linked to an investment made by countries who want to jump across generational boundaries. Why have people adopted universal healthcare? This is principally an investment. How many ministers of finance know that investing in the health of our population is investing in the wealth of the population? So that concept in countries, both to the political elite and also the economic and social sector planners, is very important.

Look at what China did. It reduced population growth, invested in infrastructure, and lifted their population up on health and education, and [as a result] the population lifted China to the forefront of global powers. It wasn’t through the proletariat or the communist party just putting billions of dollars into the national kitty. It was the people of China who did it. Today these countries with large populations have focused on the economic dividend of the population. But it is also an economic burden because if you don’t invest in the population – the young people – what you will create is thousands and thousands of unemployed youth who have no potential of contributing positively to our society. 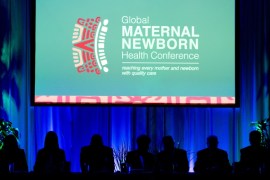 Are we winning against maternal and infant mortality?

Researchers, activists, officials and journalists gather in Mexico City to discuss healthcare for mothers and infants.