Romeo Jalosjos wanted to run for mayor of Zamboanga, a major city in the southern Philippines, in the May 13 midterm elections. A child-rape conviction 16 years ago got in the way of his plan. His brother Dominador was also disqualified to run for governor because of an old robbery conviction.

Nevermind that Romeo Jalosjos, a former congressman with a taste for wrap-around sunglasses and all-white outfits, is still expanding his political bench, recruiting nine members of his own family to seek top local positions, among the 18,000 being contested on Monday.

Jalosjos, 72, who is now out of jail, denied he is building a political dynasty. He insisted that voters asked for his family to run – three of his children and an in-law are battling for spots in Congress.

Another son and a daughter are seeking re-election as governor and mayor respectively, while a second brother is running for governor in a neighbouring province. Two of his sisters are also candidates for mayor.

The Jalosjos family is just one of the 178 dynasties ruling 73 of the 80 provinces in the Philippines. Half come from the old landed elites, while the rest turned up after the 1986 popular revolt that ousted dictator Ferdinand Marcos. Critics said the presence of these clans has stalled the country’s economic growth, and will continue to do so after the 52 million registered voters have cast their ballots.

Miriam Santiago, a senator, summed it all up when she said the Philippines is “the world capital of political dynasties”, equating political families with “Mafia crime” syndicates.

Whether Santiago’s description is accurate or not, the country’s political landscape “is getting worse,” Bobby Tuazon, director for policy studies at the Centre for People Empowerment in Governance, told Al Jazeera.

I refuse to believe that out of a population of 92 million, only a few families have this monopoly of intellect, passion and intention to serve our people


Tuazon projected that when all votes are counted, 21 of the 24 Senate seats will fall under the control of political families. That includes former President Joseph Estrada’s two sons from different mothers. In the House of Representatives, about 80 percent of the 229 seats will also be dominated by dynasties.

“The government will remain under the control of the traditional political parties,” he said.

“These are the same elites who control the economic resources of the country,” Tuazon said. What is even more alarming for him is that clans are no longer content in fielding two or three family members each election cycle.

In the province of Maguindanao, where 34 journalists covering a campaign were killed in 2009, about 80 members of the Ampatuan family, which has been implicated in the massacre, are running for office.

Even current President Benigno Aquino III is not immune to dynastic criticism. He is an offspring of two political families. His mother is the late President Corazon Aquino. His father, Benigno Jr, was a senator. An aunt and a cousin are currently running for the senate. Aquino’s predecessor and political nemesis, Gloria Macapagal-Arroyo, is a daughter of another former president.

Then there are the Marcoses. Imelda, the former first lady who became a household name for her shoe collection, is seeking re-election in Congress. The former dictator’s namesake Ferdinand Jr, is now a senator, and is reportedly running for president in 2016. His sister Lmee is a governor.

He also rejected any local comparison to the Kennedys and Bushes in the US. Philippine democracy is styled after the US, one of its former colonial masters.

“In the Philippine experience, it didn’t lead to the flourishing of democracy, or the expansion of the economy,” Palatino said. “It simply led to continued oligarchic control.”

For Tuazon, a professor at the University of the Philippines, there is no such thing as a good dynasty.

“A dynasty is an anachronism to democracy,” he said, warning that the Philippines could “forever be ruled” by political clans.

Tuazon, who has studied 600 years of Philippine political history, traced the country’s feudal culture back to the pre-Spanish Maharlika period, when local elites were dominant rulers of the fragmented islands. The system became institutionalised under Spanish rule starting in 1521, and continued during the American period from 1898 until 1946, when the Philippines gained its independence.

Following the popular revolution in 1986, the authors of the new constitution included a provision banning political dynasties. But 27 years later, Congress still has yet to pass a law implementing those rules.

Jose Torres, editor of UCAN, a Catholic news agency, told Al Jazeera that it is impossible to pass a law implementing the ban when members of the same political clans are overseeing the process.

And with the levers of power already under their control, it has become even harder for alternative candidates to win and pass reforms, Torres said.

Theodore Te, a constitutional expert and spokesman of the Supreme Court, explained to Al Jazeera that the constitutional ban on dynasties “is not self executing” and it requires legislation from Congress.

“The separation of powers bars the Supreme Court from requiring Congress to act on something that is entirely legislative in nature,” he said.

A dynasty is an anachronism to democracy


Political clans, however, are oblivious to these concerns, analysts say. All they want is to win elections at whatever cost. Sometimes, they even run against other family members in Shakespearean-style political dramas.

In the island province of Cebu, members of the Durano clan are at each other’s throats. Ramon “Boy” Durano, a city mayor, is running for re-election against his brother, also named Ramon or “Nito”, the incumbent vice mayor. The former is now teaming up with another brother, Jesus, while the latter picked his congressman son, Ramon or “Red”, as a running-mate.

Given the current political reality in the country, Palatino, the youth leader, conceded that political dynasties are a fact of life. But he also said that there is growing public sentiment against “the rule of the few”, largely sustained by  critiques made through social media. Already about 80 million Filipinos own mobiles phones, he said.

“This is good, because it will be a growing force in the next set of elections,” Palatino said. “This has a lot of potential in forcing a change in our mindset, and shaming our local officials. In fact it may inspire other leaders to rise and challenge the hegemony of these dynasties.” 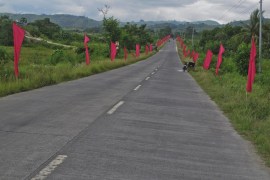 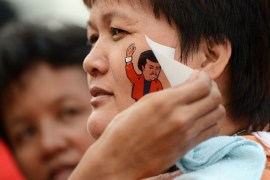