An Istanbul court found Say guilty of denigrating religion through comments he made on the social networking site Twitter, his lawyer said on Monday.

Honestly we were not expecting this ruling, and all I cansay is, both legally and for the country, it's a sad decision.

The 43-year-old musician, who has played with the New York Philharmonic, the Berlin Symphony and other world orchestras, was on trial for sending tweets last year, including one that joked about a religious leader and some Islamic practices.

“Honestly we were not expecting this ruling, and all I can say is, both legally and for the country, it’s a sad decision,” Say’s lawyer Meltem Akyol told Reuters.

The court ordered a “supervised release” for Say, meaning that he would be free as long as he did not commit a similar crime within five years.

The sentence was reduced to 10 months from 12 months due to good behaviour in court.

“We reject the charges against us but the decision is the court’s,” the musician’s lawyer told the court..

Say was not in court for the sentencing. But he denied the charges, saying they were politically motivated.

He is the latest in a series of intellectuals and artists to be prosecuted in Turkey for expressing opinions and his case has raised further concerns over rights and freedoms in the country, a democracy with a mostly Muslim population that seeks membership in the European Union.

Say, who is due to perform in Germany on Monday evening according to his website, is a strong critic of the Islamic-rooted government of Prime Minister Recep Tayyip Erdogan, a devout Muslim who expounds conservative values, alarming some secular Turks who fear the government plans to make religion part of their lifestyle.

In one tweet, Say joked about a call to prayer that he said lasted only 22 seconds.

Say tweeted: “Why such haste? Have you got a mistress waiting or a raki on the table?”

Raki is a traditional alcoholic drink made with aniseed.

The charges against Say also cite other tweets that he had sent, which were disrespectful to some Islamic religious concepts such as heaven and the call to prayer – the azzan – according to Emre Bukagili, a Turkish citizen who filed the initial complaint against Say.

Bukagili said in an emailed statement that the musician had used “a disrespectful, offensive and impertinent tone toward religious concepts such as heaven and the call to prayer”. 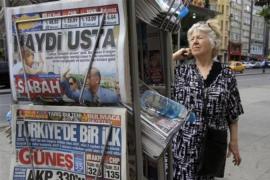 Reporter rights groups accuse Ankara of jailing more journalists than any other country in the world last year.