Cairo, Egypt – Barbed wire and rows of army tanks have replaced the once snaking queues of tourists outside the Egyptian Museum of Cairo who were eager to witness its massive collection of ancient artifacts.

The museum’s deserted chambers and dusty treasures speak of the damage inflicted upon Egypt’s tourism industry, as well as the country’s vast archaeological prizes over the past few years of unrest.

While Egypt has struggled for years now to shape its future after the January 2011 revolution, its prized past has fallen victim to sporadic violence and security lapses.

Inside the museum, less than a dozen tourists wander around its dim-lit corridors. A banner reading “Destroyed and Restored” leads into a room where items looted or bashed by vandals have been salvaged, including several statues of King Tutankhamen.

One such relic was of the young pharaoh on a boat. According to the description, the statue was found broken on the floor inside the museum, and the figure of the king was stolen but retrieved on April 12, 2011.

“We’ve lost more than what we should have, but in a way we’re jolly lucky,” said Professor Salima Ikram, head of the Egyptology unit at the American University of Cairo. “It could have been worse.”

An official at the Egyptian Museum of Cairo, who asked not to be named because he wasn’t authorised to speak to the media, said before 2011 ticket sales grossed about $110,000 each day.

“This meant about 10,000 tourists a day. Now, we get 50 foreign visitors a day, if we’re lucky,” the official said. “Then, we used to pay for our own expenses, but now we’re solely dependent on the Ministry of Finance to pay our salaries.”

Local and international antiquity authorities have rung alarm bells since the uprising against Mubarak took hold in 2011, which coincided with looters breaking in through the museum’s ceiling and damaging artifacts including mummies and statues.

Stolen items are not necessarily lost forever because many can be recovered and will inevitably resurface at some point in time, whether in the art market or while crossing borders for example.

The rampage followed nationwide clashes after the dispersal of two pro-Morsi protest camps in Cairo, in which hundreds of people were reportedly killed.

Of the total 1,089 artifacts inventoried at the museum, 1,039 were stolen, the Ministry of Antiquities told Al Jazeera.

More than 600 items were reclaimed, but about 400 others are still to be found, according to the ministry.

UNESCO Director-General Irina Bokova said the museum’s looting constituted “irreversible damage to the history and identity of the Egyptian people”.

Another home to archaeological treasures subjected to looting was in Mit Rahina, also in Upper Egypt, known historically as Memphis and the capital of ancient Egypt. According to the ministry, 104 pieces were retrieved of the 238 that went missing.

Professor Ikram said its “practically impossible” to quantify the number of objects that were stolen across Egypt since the 2011 mass protests ousted Mubarak and security deteriorated.

“They were not all officially excavated items. Treasures that awaited future excavations were dug out and stolen from sites. These items cannot be counted,” said Ikram.

France Desmarais, director of programmes and development at the International Council of Museums (ICOM), agreed, adding that estimates of missing items being in the thousands “remain rough guesses, but are not unrealistic”. She said Interpol’s International Database of Stolen Works of Art chronicles many of these missing pieces.

Desmarais and Ikram took part in putting together ICOM’s Emergency Red List of Egyptian Cultural Objects at Risk, which identifies pieces likely to be stolen and enter the black market.

“It’s meant to be a permanent tool for people who are not experts in Egyptian archaeology but who fight illicit traffic, such as the police and the customs agents,” Desmarais said.

Local and international media outlets have reported several incidents where bids to smuggle or sell Egyptian artifacts were foiled around the world. The latest was the sale of a collection of ancient Egyptian artifacts in two auction halls in Jerusalem.

Although reclaiming such artifacts is a complex process, according to Desmarais, it isn’t impossible.

Stolen items are “not necessarily lost forever because many can be recovered and will inevitably resurface at some point in time, whether in the art market or while crossing borders for example”, she explained.

The looting of ancient Egyptian artifacts, however, has not been confined only to recent periods of unrest.

“Looting is as ancient as the pyramids themselves,” Tamar Teneishvili, culture officer at Cairo’s UNESCO bureau, told Al Jazeera.

“This is why the tomb of King Tutankhamen is very exceptional, because it’s one of the very few things that survived theft.”

But Teneishvili noted the scale of sabotage that has arisen over the past several years amid the absence of security and lack of control by authorities.

“Months ago, we kept alerting the Egyptian authorities that certain excavation sites were being looted and no action was taken. Those were the scariest moments, when the police and army totally stepped back,” she said.

The theft of archeological sites was tantamount to “losing a big part of knowledge”, Teneishvili said.

“Legal excavators are not treasure-hunters, they are seekers of knowledge and each archeological item is part of that knowledge. They put pieces together to reach a bigger picture. When a part goes missing, the context is ruined.” 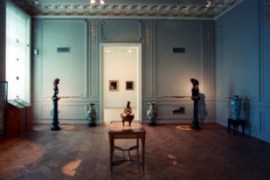 Arrests in Egypt over art theft

Deputy minister and four others may face “negligence” charge over Van Gogh painting. 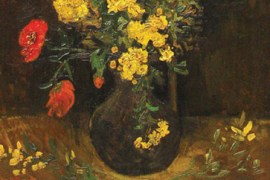 Van Gogh’s “Poppy Flowers” was cut out of its frame in Cairo’s Mahmoud Khalil museum.