Manchester, New Hampshire – From Dorothy Ann Adams to William David Zollinger, 315 men and women have filed to run for president of the United States in the election next fall.

You haven’t heard of the vast majority of them. Most are running as Republicans, as Democrats or as independents not affiliated with any party at all.

But 44 people are also running as candidates of third parties, ranging from the prominent to the obscure. Some are hoping to have their names and parties listed on the ballot in all 50 states; others expect to be listed in just a few states.

“The Democratic Party has proven itself to be just the other side of the coin from the Republican Party in what has become an incredibly corrupt, diseased system. The influence of money in our government is rampant, and we see the Democrats feeding at the same trough of special interest money as the Republicans.

“In addition to that, the Democrats seem to have no more regard for the rule of law as the Republicans … After President Obama took office, one of the first things he said about accountability under the law, particularly for war criminals, was that we should simply look forward and not look backwards … It’s really appalling that anybody in our government would suggest that those who commit these egregious crimes simply be exempt from the application of the law.

“Under the Obama administration, not one person responsible for the massive financial fraud leading to the economic disaster from which we’re still suffering … has been subject to criminal prosecution. No one has spent one day in jail for those massive financial crimes.

“And those who say that they’re afraid of being a spoiler, and that we ought to at least support the lesser of two evils: I think they lose sight of the fact that keeping a real alternative out and relying upon the two parties that have brought us to this disastrous point is to simply reinforce the status quo – and continue this rotten, diseased system.

“The system in many states is really stacked in favour of the Republican and Democratic duopoly by making it virtually impossible for alternative parties to get on the ballot. For instance, even though the presidential election isn’t until next November, the deadline for getting parties qualified on the ballot in California is January 2. And that requires either 1,300,000 signatures on petitions or 103,000 people registering as members of the Justice Party. That kind of a deadline is completely unnecessary and unreasonable.

“A related factor is the way this political duopoly has hijacked the presidential debates … Alternative voices are left out of the debates, and that turns out to be devastating in terms of the possibility for real change. When Ross Perot was allowed to debate the first time he ran for president [in 1992], he tripled his polling numbers because people were able to hear from him and compare him to the other two candidates … Jesse Ventura was at ten per cent in the polls when he was running for governor of Minnesota. He was allowed to participate in debates, and he won the election as a result. That’s how important these debates are.

“First thing I would do [if elected president] is bring our troops home – and bring the contractors who have been hired by our military home, both from Iraq and Afghanistan.

“The other thing I would do immediately upon taking office is to declare that the United States will, in every way possible, provide the badly needed and long neglected international leadership on the climate crisis. We have no more time to lose. The consequences are going to be catastrophic if we continue to dither on what is, in terms of the long-term consequences around the world, the most crucial issue facing our planet today.”

“[If elected president, I would] declare peace – not only with the world, but with ourselves. Americans have got in this mindset of war. Everything’s a war. Our political rhetoric is rife with war. We need peace. Everybody wants to be prosperous. There’s one way to be prosperous – and that’s to be at peace with everyone.

“America needs to stop being the nosy neighbour in the crowd, poking our nose into everyone else’s business and trying to tell them what to do, and making enemies because of that … If somebody is coming to America and attacking us, then yeah, we need to go to war and defend ourselves. We need to stop making war for any other reason.

“[If elected,] I’d be raising unemployment, particularly in the Washington DC area – because I plan to put a lot of bureaucrats out of work … There are a lot of departments we have that we don’t really need. Department of Homeland Security: We’ve always had that; it was called the Department of Defence. And yet we create another bureaucracy that is redundant. The Department of Education: We need to return education back to the cities and towns and parents where it belongs instead of taking it on at the federal level, where they’ve made such an abysmal mistake in spending so much money – and getting nothing done.

“End the war on drugs; do away with the Drug Enforcement Administration. The best thing that we can do for the economy of the United States is to get government out of the way and allow people to work.

“I really don’t know what to think [about Occupy Wall Street]. Just doesn’t make sense to me for people to be so angry about government and big business – but then expect government to fix the problem that government has created … For the most part, they’re looking in the wrong place for the answers.

“The media doesn’t take us [the Libertarian Party] very seriously, and that of course is because everything’s based on polling numbers. And the two big parties are so entrenched in American society that most people just don’t take third parties very seriously to begin with.

“But the biggest impediment that’s in the way of third parties in this country is the ballot access laws … The Democrats and Republicans in a lot of places do everything they can to keep us off the ballot in the first place. [In North Carolina,] if you want to be considered as a write-in candidate, you have to petition to be on the ballot as a write-in candidate. If you live in parts of the country where you can only vote for candidates that the government tells you you can vote for, are you really free?”

“I joined [the Green Party] in 2000, around the time of the Nader run … I had not been a member of a party or really politically active until that time. I was never inspired to have been a part of the Democrats to start with.

“I was one of those people who was just off-put by political parties in general, and I didn’t really come to see them as a necessary thing essential for political and economic change. It took me ten years of participating in the policy process to understand why we need political parties.

“Our hope is to qualify in enough states to give [the Green Party] access to 90 per cent or more of the Electoral College. That means at least 40 states … We currently have access in something like 17 states … and can relatively easily get enough to bring us up to a total of 30 or 35.

“I’m campaigning through largely the below-the-radar grassroots campaign techniques, using everything that we can possibly get our hands on. A lot of it is social media, alternative media, the blogs. We’re definitely out there, [but] the typical electoral discussion is very closed to challengers, to alternatives, and more closed with every passing year.

“The Green New Deal is basically an emergency programme of jobs creation. It is modelled on the New Deal that helped get us out of the Great Depression in the 1930s … Specifically, it would be creating jobs in small businesses and cooperatives at the local level in key areas of the green economy … clean manufacturing, local organic agricultures, public transportation, and sustainable, clean renewable energy. That simultaneously goes a long way to solve the issues of national security and would begin to make wars for oil obsolete.

“In the era of Citizens United, we are swimming in money – as if we weren’t even before Citizens United. This is a sort of influence-peddling on steroids.

“But we have seen some pushback against that. [Money] is not determinative, but it certainly tilts the playing field. In the recent elections, with the defeat, for example, of some of the worst anti-immigrant and anti-women’s reproductive rights referendums – it’s not a done deal just because they have the money on their side … The playing field is tilted, but it always has been, and we’ve known that.

“In my own political career, which has entailed running for elections, my vote counts have largely gone down as the system has become more rigged. So I really don’t look to vote counts to be an indicator of success or failure. At the same time that our vote counts have gone down in Massachusetts, our party has grown much stronger … Whether two per cent or 52 per cent [of the vote], it’s a win … The goal here is bigger and longer-term.”

“The Prohibition Party asked me for several years to be their candidate … This year I said: ‘Well, go ahead, put me on the ballot if you so wish’ – the reason being, they’re the anti-liquor party. And I’m anti-alcohol, I’m anti-liquor. So we fit real well there.

“The biggest problem facing America is the morals. The morals of this country [are] shot. And I’m not just talking about getting drunk and shacking up – I’m talking about conviction, standards, honesty, integrity, righteousness – the whole schmear.

“[When I ran for president] in 1988, I was on some national talk shows, radio, TV, that kind of thing … And I took on the radical [black] element in our country – the radicals, like the Jesse Jacksons … After about a couple years, they blacked me out. They didn’t call on me to do interviews anymore. I’m dissatisfied with both parties. They’re what’s wrong with the country now…

“This county is ripe now for an independent party … People are so fed up now with politics, Democrats and Republicans, that they’re just plain independent. If somebody had the time and the money, now is the time for a real, bona fide, legitimate independent party in America … If you had $100m then you could get some people on board and make a serious dent in this thing.

“I don’t have $100m, and I’m 80 years old. [The Prohibition Party] think they would probably get me on three or four ballots. My guess would be a couple, three max.

“I’m a straight-laced, right-wing conservative, motherhood-and-apple-pie, flag-saluting – If I ever find a liberal bone in my body, I’ll go to a surgeon and have him take it out and throw it in the garbage dump … I’m a born-again Christian, saved by grace, washed in the blood, that kind of thing. But I don’t imply anywhere that you have to adopt that or buy into it. I’m Baptist, but there [are] other good people.”

The views expressed in this article do not necessarily reflect Al Jazeera’s editorial policy. 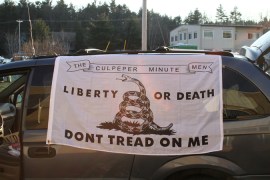 After several months of campaigning, Republican hopefuls will face off on Tuesday in the New Hampshire primary. 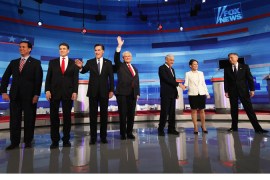 A look at why the small state’s primary is so important in determining the Republican presidential nominee. 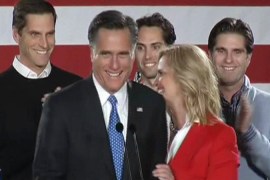 US Republicans vie for conservative vote 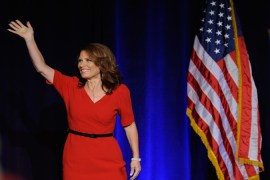 Is sexism to blame for the Minnesotan Congresswoman’s decline in popularity?