SENDAI CITY, Japan – At 2:46 pm, sirens will blare across Japan to commemorate the moment a magnitude 9.0 earthquake hit the country, triggering the deadliest events here since two of its cities were levelled by atomic bombs during World War II.

In Sendai City, the annual jazz festival, which kicks off on September 11, precisely six months after disaster visited the country, holds special meaning this year. It signals a healing process for communities up and down the battered northeast coast of the country.

But recovery isn’t moving at a uniform pace in areas jostled by the quake and then crushed by a massive tsunami that displaced millions, killed around 20,000 and posed a formidable challenge to a country accustomed to natural disasters.

Just a week ago, on September 4, a typhoon hit western Japan, flooding several prefectures, leaving at least 100 people dead and missing, and isolating the area for days.

Sendai City, which was accessible only to emergency personnel in the days following the earthquake and tsunami due to damaged roads and lack of train service, is probably the most on track.

But if the amount of work to be done here seems minimal, it’s only because actual tsunami damage was relatively light. It was the city’s infrastructure that took a major hit – some areas did not have running water for over a month, and electricity was similarly scarce for a couple of weeks.

The farms close to the water were wiped out by the tsunami, and they need to be rebuilt, but the major challenge moving forward in Sendai City, according to the Office of Disaster Reconstruction there, is to try to deal with the engineering needed to withstand such a disaster.

A spokesperson from the disaster office credited the relatively minor structural damage to the city’s buildings to the lessons learned following a 1978 earthquake, which prompted city planners to retrofit existing buildings with braces and to update construction codes for new buildings to withstand a quake.

But a tsunami with monster waves several metres high is another matter.

“We cannot recreate that to see how to deal with it,” said the spokesman. “When such a wave hits a wall (or a highway, as it did in March) will it split? Will it flow over it? Would it move in another direction?” he said.

“This is very hard to plan for.”

What disasters leave behind

Most engineers and city planners in Japan would be thrilled if the only challenge they faced were planning new communities and drafting new disaster plans.

However, they must first deal with mountains of rubble – all that is left of the many coastal communities, where boats, seafood processing plants, schools, cars, temples and city halls were violently tossed into a huge gnarled mass.

In Rikuzentakata, where the over 1,500 casualties were higher than the city’s crematorium could bear and the entire waterfront was eliminated, there are still piles of rubble, some 10 or more metres high.

This is remarkable progress, though, given that six months ago, the entire landscape was covered by debris and the smell of decaying bodies hung in the air.

Now, the roads are cleared, and the rubble, present as it is, is being painstakingly sorted into piles – lumber, metal, etc. – and being processed accordingly. An automotive graveyard, where crumbled vehicles are neatly lined up, rests on one side of a road while on the other, a pile of luggage, a heap of lumber and stacks of tyres await transportation.

Tomohiro Owada, a spokesman for the city of Rikuzentakata, said that the city’s reconstruction will take around eight years to complete – although it’s hard to tell what exactly that will look like. It’ll take three years to clear and process the debris alone. And until then, just about everything is temporary – homes, bridges and government offices alike.

“I doubt anyone will want to live in the same area, near the water, again,” said Owada. “But we don’t have enough land higher up to accommodate everyone. So I’m not sure how this will work.”

With the waterfront – which held the port, fishing industries, hotels, restaurants and more – reduced to mud and piles of debris, the biggest problem right now in the area is unemployment, said Owada.

The struggle to feed a family is something that Yuichi Oikawa, 44, who has a wife and two young children, ages 3 and 5, has to consider.

“They give you temporary housing, but everything else is up to you,” said Oikawa, who now lives in a pre-fabricated emergency housing unit. He said he’s picked up some part-time work here and there, but the restaurant at which he worked was washed away.

In order to get on his feet again, Oikawa said the restaurant – along with the rest of the town – must be rebuilt. And that will take some time.

There’s a committee tasked with coming up with a plan, which might include having to clear-cut swaths of land on Mount Hikami. Given the number of people who lost their homes – there were 10,000 people in emergency shelters at one point – that seems likely.

Keiko Ito, 70, is among those who lost her home – but she considers herself rather lucky. Rather than go to the designated emergency point in her area, her instincts told her to drive to her brother’s home when she felt the quake.

“The emergency meeting point was washed away,” said Ito, looking through a pile of brand-new donated clothes. In fact, most of the designated earthquake and tsunami meeting points were destroyed. But Ito isn’t complaining, as she has managed to get emergency housing – one of the prefabricated units is holding 2,100 households in Rikzentakata alone – that the government started erecting roughly 10 days after the earthquake.

“I’m not the greedy type,” said Ito. “I experienced hard times after World War II, so I’m quite happy with what I have.”

While even the most casual of exchanges between acquaintances can turn into a very matter-of-fact list of what and who was lost on that March afternoon, there are just as many opportunities to witness what resilience and survival look like.

In Kesennuma, where the waterfront is still a stench-filled wasteland, there’s a joyful noise to be heard at the top of the hill, away from what looks like a war zone, dotted with ponds of stagnating sewage.

Here, you will find the Swing Dolphins, a junior jazz band, rehearsing for the Sendai jazz festival, known as the Jozenji Street Jazz Festival.

Maybe watching a halting group of kids under the age of 15 jam their way through a seemingly random list of American jazz standards won’t seem like anything special. But considering that nearly half the band members lost their homes in the tsunami and that their instruments came via a gift from a non-profit in Louisiana, the fact that the Swing Dolphins are performing at the festival at all is pretty spectacular.

However, these kids aren’t thinking about the homes they lost, the 1,000 or so people confirmed dead in their town, the nearly 400 still missing, or the fact that so many are still living in their community’s 34 emergency shelters.

Takako Onodera, 15, said she doesn’t even remember how she heard that her home had been destroyed. Maybe her mother told her. Maybe someone from the school did. She shrugs off the memories of that day.

In a T-shirt that reads “I will win this game”, the alto sax player just wants to focus on playing her last gig with the junior jazz band.

“I’m looking forward to playing and just want to play our theme song well,” she said.

Recovery by force of will

Even as things move slowly in some respects, trying the patience and goodwill of some communities, there is, in every prefecture, in every neighbourhood, some sort of plant to rebuild, to return.

The plan, such as the one laid out in Ofunato, might be a decade in the offing, but it’s still there.

But first, he needs the federal government to release its third emergency budget.

“It’s a little bit late,” he said. The first two emergency budgets were for rescue operations, but this one, aimed at rebuilding, has hit a snag. A fit of political entropy is holding things up, making communities such as Ofunato pay in times they can ill afford. The third emergency budget should have been determined by the end of August, but as it stands, it might be November before anything happens.

Toda blames in-fighting among whom he calls “politicians, not statesmen” for the delay.

“And this is a really shameful thing for Japanese people, for Japanese nation,” said the mayor, clearly not mincing words.

“But I don’t need to wait until November to determine my rebuilding plan,” he said, fetching a binder to show what he’s been working on. “At this moment we have completed the rebuilding plan.”

But those are just the broad strokes of Toda’s extensive plan. First, the industrial and residential debris has to be fully cleared and processed. Then there’s rebuilding on the waterfront with reinforced concrete while making sure to maintain a few monuments from the tsunami. There are education curriculums to be considered, a seafood co-op he’d like to form (the fishermen, he said, aren’t business-savvy at the moment) and green energy to procure.

The mayor said that the government is investing in helping businesses resume operations, and that of the businesses that ceased operations after the tsunami, roughly 60 per cent are in the process of starting over again.

Among them is Maruka Kawasho, a seafood processing company with facilities – or what used to pass for facilities – on Ofunato’s waterfront.

All that remains now is a series of gutted rooms spewing out a tangle of unidentifiable equipment. The company’s president, Mutsuo Kawahara, is overseeing the clean-up process which, he said, won’t restore the processing facility.

“Maybe it could be some kind of storage,” he said, adding that tsunami had cost his company over $1m in damaged equipment and storage facilities alone, never mind merchandise.

But Kawahara said he’s less concerned about the equipment than he is about the quality of seafood his plant might be processing once it’s up and running again.

“I have more anxiety because of the aftermath of Fukushima,” said Kawahara, adding that he worries about the level of radiation contamination in the waters off the coast of Japan resulting from the leaking Daiichi plant.

But doesn’t he believe the government when it says that the fish is perfectly safe to eat? 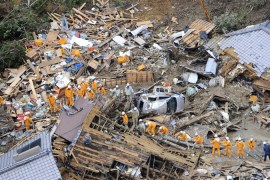 At least 17 people reported dead and 40 others are missing after Typhoon Talas hits the country’s west. 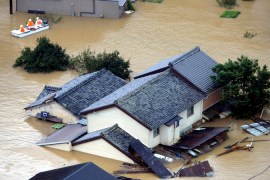 At least 25 dead and dozens missing as heavy rains and strong winds from Typhoon Talas sweep across main island. 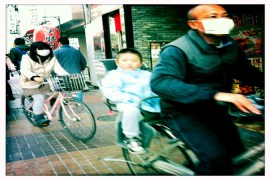 Tokyo is fighting for a comeback despite fears of radiation exposure, another earthquake, and a looming energy crisis. 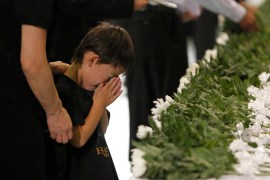 Ceremonies take place in Japan to commemorate six months since northeast coastline was devastated by quake and tsunami.