New Orleans – Testimony began last week in a trial of alleged police violence that holds national implications for the newly-empowered civil rights division of the US Justice Department. Five New Orleans police officers are facing sentences ranging from 120 years to life for allegedly killing unarmed civilians in the chaotic days after Hurricane Katrina, the 2005 storm that left 80 per cent of this city underwater. They are also accused of hiding their crime through a wide-ranging conspiracy that lasted several years and included upper leadership in this city’s troubled police department.

On September 4, 2005, New Orleans Police Department officer Jennifer Dupree saw two men in the distance who she believed to be armed and firing shots in the direction of her and other officers. She put out a “108” call on her radio, which means “officers in danger”. Officers, apparently mishearing this call, thought police officers had been shot.

A heavily armed group of officers raced to New Orleans’ Danziger Bridge, where, according to witness testimony, they found two families of unarmed civilians who were seeking shelter and safety after flooding in the aftermath of the storm. Officers decided to “shoot first, and ask questions later,” according to US Department of Justice Civil Rights Division Deputy Chief Bobbi Bernstein, who is prosecuting the case against the officers.

Bernstein says the officers came out shooting, and even when they saw that no one was armed or looked like the suspects described by Dupree, they continued shooting, firing point blank at helpless Katrina survivors as they cowered on the ground.

Seventeen-year-old high school student James Brisette and a 40-year-old mentally challenged man named Ronald Madison were each shot seven times, mostly in the back. One officer was seen stomping and kicking Madison after he had been shot. Jose Holmes, Jr, 19-years old, was shot several times, then saw an officer stand above him as he lay on the ground and fire two shots into his stomach. When paramedics came on the scene, they did not think Holmes would survive, and he required several surgeries and the use of a colostomy bag over the following years. His aunt, Susan Bartholomew, had her arm shot off of her body. Brisette and Madison died at the scene, and Holmes, as well as Susan Bartholomew and her husband and daughter, were badly wounded.

In a wide-ranging conspiracy, federal investigators have accused officers of planting evidence, inventing witnesses, and having a series of secret meetings to plan their cover stories. Five cops have already pleaded guilty and agreed to testify against their colleagues in exchange for the possibility of reduced sentences.

Lawyers for the accused have mounted an aggressive defense of their clients in court this week, labeling the government’s case a “work of fiction”, and calling the prosecution witnesses liars or delusional. They have accused the government of going after hero police officers who acted in a difficult situation. “Of the thousands of deaths that occurred after Hurricane Katrina, the only ones that were investigated are police shootings,” declared defense attorney Steve London, who represents Sergeant Kaufman, accused of leading the cover-up. Saying his client did a hard job the best that he could, London added, “For the government to come here six years later and look over his shoulder is inexcusable.”

For years, the truth about what happened on Danziger Bridge was buried within the post-Katrina chaos. New Orleans district attorney Eddie Jordan brought charges against officers in 2007, but a judge later dismissed the case. In 2009, after Eric Holder was brought in to lead the US Department of Justice, federal investigators took a new interest in the case. “I’ve seen a marked shift in the Justice Department approach to investigating and acting on systematic violations by police departments,” says law professor Craig Futterman, who runs the University of Chicago’s Civil Rights Police Accountability Project. “Federal investigation is a critical tool if we hope to address systemic violations,” he added.

The DOJ has launched investigations into the police departments of Newark, New Orleans, and Seattle, and is in the preliminary stages of an investigation in Denver. This marks a major shift from the Bush-era Justice Department, which showed little interest in these kinds of cases. In fact, the former president and his attorneys general have been accused of gutting the department’s civil rights division, forcing experienced prosecutors to resign and prioritising right-wing ideology over experience when hiring new staff. “The civil rights division was left somewhat decimated,” Professor Futterman told Al Jazeera,  “And really needed to be built up again.”

In New Orleans, the Danziger revelations, along with at least nine other cases of police violence currently being investigated, have led to a major shift in how the New Orleans Police Department (NOPD) is perceived, and the story of police heroism after Katrina has been replaced by one of brutal violence. Even communities who formerly embraced the NOPD now harbor suspicions. “The public has a right to know what really happened,” says Anthony Radosti, a 23-year veteran officer and vice president of the Metropolitan Crime Commission, which plays an unofficial watchdog role over the NOPD. “The police department failed in their mission.”

With the highest murder rate in the US, one of the largest per-capita city jails in the world, and two former police officers already on death row for brutal murders that came out in 1990s-era federal investigations, New Orleans has developed a reputation as having the most troubled criminal justice system in the US. If the DOJ can succeed here in rebuilding this department and restoring public trust, it will serve as a template for efforts in other cities. If they fail, it may curtail the other federal interventions in local police departments. “The problems of New Orleans are not unique,” says Tania Tetlow, a law professor at Tulane University and former federal prosecutor in New Orleans. “They are often worse, but urban police departments around the country struggle with the same issues.”

In addition to ongoing prosecutions of NOPD officers, the Justice Department has also been looking into conditions at the local jail, and there have been calls for investigation of the city coroner, who has been accused of helping conceal police killings, and of the former Judge who originally threw out the Danziger case.

Assistant Attorney General for Civil Rights Thomas Perez, who was a part of federal investigations in the 90s that led to hundreds of convictions and dismissals of NOPD officers, has indicated that the Justice Department is planning to engage in federal oversight of the NOPD. “Criminal prosecutions alone, I have learned, are not enough to change the culture of a police department,” he told the website TPMmuckraker last year.

Who can you trust?

“This is a moment to systematically change what the police department has become,” adds Professor Tetlow in an interview with Al Jazeera. “The type of changes that have to happen are broad and systemic. My hope is that change will happen with a consent decree that’s enforceable by a judge.”

Across the city, the sense of anger and outrage is palpable. On WBOK, the city’s only Black-owned talk radio station, people call in daily to complain about the city’s police department, as well as local media and others who are said to have helped hide the problem. “We have to revamp the whole system, it doesn’t work, not for African Americans,” says William Tanner, who was beaten by police in another recent case, and has appeared as a guest on WBOK’s popular morning show.

Tanner had tried to rescue Henry Glover, who was shot by one officer and then had his body burned by other officers. In December, three officers were convicted, and two acquitted in the murder and cover-up of the Glover killing. “Who can we trust?” asks Tanner in a conversation with Al Jazeera. “You’ve got police shooting people, pulling people over and harassing people. We need to change all of it.”

The trial is expected to last eight weeks. Sergeants Robert Gisevius and Kenneth Bowen and officers Robert Faulcon and Anthony Villavaso face life in prison for the killings and conspiracy. Sergeant Arthur Kaufman, who was not on the bridge during the shootings, is charged in playing a lead role in the cover-up, and could get 120 years. Sergeant Gerard Dugue, who also allegedly participated in the cover-up, will be tried separately, in September. If convicted, he could receive 70 years. 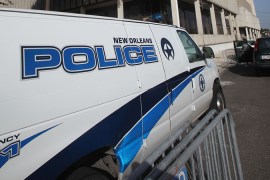 Trial of police officers accused over post-Hurricane Katrina killings hears how survivor was shot as he lay bleeding. 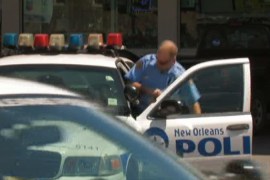 US police on trial over Katrina killings 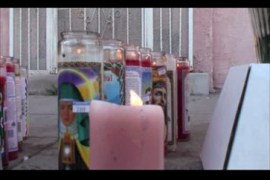 Inside USA looks at a different kind of race war: America’s Black-Brown divide.