Brian’s death ends his decade-long challenge to the British establishment and his constant reminder to Members of Parliament and civil servants entering the Houses of Parliament in London of the brutal effects on ordinary people of economic sanctions and wars in Iraq and Afghanistan.

On June 2, 2001, Brian Haw left his wife and seven children and his work as a carpenter to live day and night outside parliament, to focus attention on the devastating impact of the economic sanctions on Iraq and the plight of children born with birth defects attributed to the use of depleted uranium munitions in the 1991 Gulf war.

Brian endured threats, violence and abuse for the duration of his protest. “I want to go back to my own kids and look them in the face again,” he wrote in 2002, “knowing that I’ve done all I can to try and save the children of Iraq and other countries who are dying because of my government’s unjust, amoral, fear- and money-driven policies. These children and people of other countries are every bit as valuable and worthy of love as my precious wife and children.”

In 2003, when the UK and US commenced their war against Iraq, Brian began fasting and praying with other protesters who joined him in sleeping rough in Parliament Square. Laws were drafted and passed attempting to remove Brian – but he manage to remain.

Member of Parliament John McDonnell recalls how, with fellow-MP Tony Benn, he acted as a character witness for Brian during his many appearances in court, including some brought by the Metropolitan Police on accusations of aggression and assault. “Brian was bearing witness to the horrendous war crimes in Iraq, reminding MPs of their own guilt,” McDonnell says. “He was always willing to engage in debate but was continually harassed by the state. He remained a pacifist and a true democrat. Argument and debate were the only tools that he would use in his fight against injustice. He won repeatedly in court against the police.”

“Brian was in the British tradition of protest against great injustices,” McDonnell adds, “alongside the long-term picket outside the South African embassy against Apartheid.”

Jeremy Corbyn MP says Haw “single-handedly managed to irritate the British establishment simply by his presence in Parliament Square, every day reminding MPs of their preference for lies and deceit regarding Iraq and Afghanistan over the truth that British weapons and arms have destroyed thousands of innocent lives”.

Rikki Blue is an independent film-maker who covered many of the protests and events that spiralled out of Brian’s long struggle to remain in Parliament Square. He recalls that Brian “always worried about the kids. Everything that is wrong about war is that innocents die – and the biggest symbol of innocence are children.”

“Brian demanded that the world stops killing kids.” Blue expands: “He was such an angry man but when he smiled it was like the heavens opened. He suffered so much persecution and violence during his time in the square – but nothing could shake his belief that killing kids is wrong.”

Emma Sangster, of the Voices in the Wilderness campaign against sanctions in Iraq, recalls how she first met Brian ten years ago: “Initially he had just three little placards – but he created a space where people could learn about the world in a way that was very formative before he was beleaguered by all the legal pressures from the laws especially drafted to get rid of him.”

The authorities’ determination to remove him became more entrenched but, Sangster says, “truth was stranger than fiction in the ways he managed to survive and remain. In 2002 he won the case that made his protest lawful: he stood his ground but he was under lots of pressure day after day”.

“In 2004,” Sangster recalls, “I took my newborn son to meet Brian at a vigil at Downing Street. It was very special. Brian had great affection for my son Tom as well as all the children he met in Parliament Square.”

Milan Rai, an author and editor of Peace News also pays tribute: “We first met Brian while holding our Friday vigils in Parliament Square on the Iraq sanctions. We used to enjoy speaking with him and supporting him.”

In 2004, I filmed Brian Haw welcoming US peace campaigner Cindy Sheehan, whose son had been killed in Iraq. Brian and Cindy threw their arms around each other and wept over the grim images of mutilated children arranged over Brian’s protest display. They both kept saying, “see what they are doing to the kids, see what they are doing to the kids”. Crowds of people followed them to the Prime Minister’s residence at 10 Downing Street, where they continued to protest for the rest of the day.

After the first year of his protest Brian had amassed a large number of placards denouncing US and British bombing of Iraq: the local authority, Westminster City Council, went to court to end the vigil. The judge, Mr Justice Gray declined, finding that:

One significant aspect of the case was an individual’s right under Article 10 of the European Convention on Human Rights, which guarantees freedom of speech. Mr Justice Gray added that he was “not persuaded” the defendant’s placards could be considered advertising. “Looking at the issue of reasonableness in the round and taking account of the duration, place and purpose and the effect of the obstruction, as well as the fact that the defendant is exercising his Convention right,” Mr Justice Gray came to the conclusion “that the obstruction for which the defendant is responsible is not unreasonable: I decline to grant the injunction”.

After the ruling, Brian raced outside the courts and embraced a Buddhist monk and nun who had held a vigil outside the Royal Courts of Justice and told them: “God sends us good judges.” He pointed to pictures of sick Iraqi children, declaring: “This has been hidden from our people for so long. This is an abomination. If the people knew what is being done in their name in Iraq, they would be horrified.” Asked how long he would continue his protest he said: “As long as it takes. When do you give up on the kids?”

With the death of Brian Haw, London has lost one its most unusual and distinctive landmarks. Anyone who passed the Houses of Parliament could hardly miss him. Another indicator of his wide impact was Britain’s most coveted art award, the Turner Prize, being won by Mark Wallinger for rebuilding Brian’s Parliament Square protest in the Tate Britain gallery.

John McDonnell MP now plans to put a resolution (an “Early Day Motion”) before the Houses of Parliament calling for the erection of “a monument to Brian Haw that celebrates peace, rather than celebrating war – as do many of London’s great monuments”. 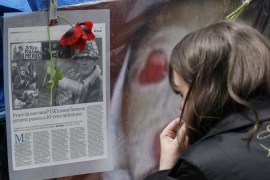 British protester who camped outside parliament for 10 years dies aged 62.

British police have dismantled a long-running one-man anti-war camp outside the Houses of Parliament in London. 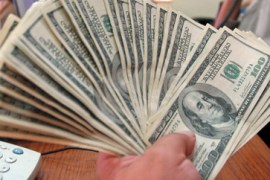 ‘You roll over, the banks cash in’

US should respond to financial crisis with a new civil rights movement, says activist.