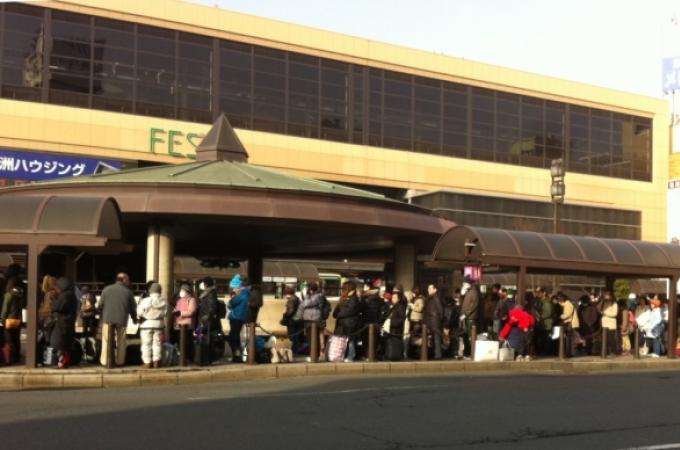 MORIOKA – It’s not much of an image – a bunch of people standing in line to catch a bus.

Except here’s the thing: Most of these folks are in line to catch the number 8 bus in front of the Morioka Train station. And most of the people you see lined up in front of it (and around the block) are heading not to the other stops along the way – although a few have clearly just spent a couple of days shopping in Morioka.

They’re heading to Hamanaki airport, where flights are taken to Sapporo, where they plan on waiting out the current issues with food and fuel shortage in the Tohoku and Kanto regions (the former being hardest hit by the March 11 earthquake and tsunami, the latter being just south of it).

“But if there is problem in Fukoshima, then we will fly to Korea,” said Taro Saito, 27. He was travelling with his family, which included a couple of elderly members.

But, if the authorities are right, then being over 200km away from Fukoshima would mean he’s safe enough.

“I don’t want to go,” he said, adding that sometimes, it was best to be safe until one could be sure. His aunts don’t want to leave, but then they decided, “We leave where we know or maybe die where we stay’.

Saito is certainly not alone. Another family interivewed (who did not want the details of their family made public – discretion is highly valued here) – said that when they first sought to book flights to Hanamaki, they were told there was a four-day wait.

They too, are torn about leaving. Half of the family wants to leave, the other does not. There are children and elderly invovled, and for one side, the worst-case scenario means being affected by high levels of radiation, for the other, it would mean leaving Japan.

The images we see in the media – the rubble of homes and lives, the emergency shelters, the villages turned to watery graves, aren’t a distant story to folks here. Those tragedies are unfolding in their communities, in their families.