The spectre of Bradley Manning lying naked and alone in a tiny cell at the Quantico Marine Base, less than 50 miles from Washington, DC, conjures up images of an American Guantanamo or Abu Ghraib, where isolation and deprivation have been raised to the level of torture.

In fact, the accused Wikileaker, now in his tenth month of solitary confinement, is far from alone in his plight. Every day in the US, tens of thousands of prisoners languish in “the hole”.

A few of them are prison murderers or rapists who present a threat to others. Far more have committed minor disciplinary infractions within prison or otherwise run afoul of corrections staff. Many of them suffer from mental illness, and are isolated for want of needed treatment; others are children, segregated for their own “protection”; a growing number are elderly and have spent half their lives or more in utter solitude.

No one knows for sure what their true numbers are. Many states, as well as the federal government, flatly declare that solitary confinement does not exist in their prison systems. As for their euphemistically named “Secure Housing Units” or “Special Management Units”, most states do not report occupancy data, nor do wardens report on the inmates sent to “administrative segregation”.

By common estimate, more than 20,000 inmates are held in supermax prisons, which by definition isolate their prisoners. Perhaps 50,000 to 80,000 more are in solitary confinement on any given day in other prisons and local jails, many of them within sight of communities where Americans go about their everyday lives.

Over the past 30 years, their numbers have increased even faster than the US’ explosive incarceration rate; between 1995 and 2000, the growth rate for prisoners housed in isolation was 40 per cent, as compared to 28 per cent for the prison population in general, according to Human Rights Watch.

Likewise, no one can state with any consistency what these prisoners have done to warrant being placed in solitary confinement or what their isolation is supposed to accomplish.

As it stands, prisoners can be thrown into the hole for rule violations that range from attacking a guard or a fellow inmate to having banned reading materials or too many postage stamps.

In doling out months or even years in solitary, the warden and prison staff usually serve as prosecutor, judge and jury, and unsurprisingly they often abuse that power. The cases are shocking and they abound.

At the all-solitary Colorado State Penitentiary, Troy Anderson has spent the last 10 years in isolation, never seeing the sun or the surrounding mountains, due to acting out on the symptoms of untreated mental illness.

Anderson has been diagnosed with ADHD, bipolar disorder, intermittent explosive disorder, anti-social personality disorder, cognitive disorders, a seizure disorder and polysubstance dependence, and he has attempted suicide many times, starting at the age of 10.

His mental health treatment in prison has consisted largely of intermittent and inappropriate medications and scant therapy, most of it conducted through a slot in his solid steel cell door. By Colorado’s own estimate, 37 per cent of the prisoners in its isolation units are mentally ill.

Steve Bright of the Southern Center for Human Rights described the case of a 15-year-old boy named JP – accused, but not yet tried or convicted, of murder – who stands to spend up to two years in isolation in a Tennessee county jail because his family is too poor to afford his bond, set at $500,000. Although he had previously attempted suicide and been treated for mental illness, JP has spent his time behind bars “with no physical contact from a member of his family and no schooling”.

His mother is allowed to “visit” him by seeing him twice a week for 30 minutes on a TV monitor. She has not touched her son in over a year. “The child has gone for over a year with no physical contact other than a correctional officer holding his arms when they move him.”

This story is far from rare: Children in adult prisons and jails often end up in solitary because there is simply nowhere else to put them to prevent them being victimised.

Prisoner Michelle Ortiz was first admonished, then shackled and sent to solitary confinement as punishment for reporting her molestation and subsequent rape by a male guard at the Ohio Reformatory for Women. As the Columbus Dispatch reported: “When Ortiz reported the first assault to prison official Paula Jordan, the official told the inmate that the male guard was being transferred from the facility and was ‘just a dirty old man’. That same evening, the male guard assaulted her again.”

She was sent to solitary, reportedly, so that she could not tell other prisoners what had happened to her. Victims of prison rape, like children, are often isolated “for their own protection”, or given a choice between solitary confinement and continued sexual assault.

Timothy Muise, a prisoner at the Massachusetts Correctional Institute at Norfolk, protested to prison authorities about a sex-for-information racket being run by guards, in which certain prisoners were permitted to have sex in return for snitching on others.

He was thrown into solitary for two-and-a-half months, brought up on disciplinary charges for “engaging in or inciting a group demonstration”, and shipped out to another prison. It is far from unusual for prison whistleblowers to be silenced through the use of solitary confinement.

Maine prisoner Deane Brown, serving a lengthy sentence for burglary and robbery in the lockdown unit of Maine State Prison, began sending reports by letter then by phone to a community radio station; he called his reports “Live from the Hole”.

He was reprimanded by the warden who said he was “disclosing confidential information through the media”. Then Brown was suddenly whisked away to a series of maximum security prisons in Maryland, and ended up in a particularly brutal solitary confinement unit in New Jersey. Cases of jailhouse journalists being punished with isolation have surfaced in other states, as well.

At the Louisiana State Penitentiary at Angola, Herman Wallace and Albert Woodfox were placed in solitary confinement following the murder of a prison guard. They maintain that they were targeted for the crime because of their membership in a prison chapter of the Black Panthers.

More than 38 years later they are still in solitary. Both men are now in their 60s, but the warden maintains they must be kept in isolation because they are “still trying to practice Black Pantherism” and he does not want to “have the blacks chasing after them”.

What conditions await these prisoners consigned to solitary for months, years or decades? A typical supermax cell runs about 2 x 3 metres and contains a toilet and sink, a slab of poured concrete for a bed and another slab for a desk.

Occupants may get a brief shower a couple of times a week and a chance to exercise in what looks like the run of a dog kennel three days a week. Food is shoved through a slot in the door. They get perhaps one phone call a month and an occasional visit, through a barrier, with an approved list of family and friends. They can select a book every so often from an approved list. On occasion, a TV inside or outside the cell blares programming at them, often of a religious nature.

If they are deemed to have misbehaved in some way they may be deprived of exercise, books or visits; if deemed a suicide risk, they can have their blankets and even their clothing removed. In one Louisiana parish prison last year, suicidal inmates were found being locked, alone and often naked, in so-called “squirrel cages” measuring 1 x 1 metre; one-fourth of the locally mandated size for caged dogs.

Wilbert Rideau, a renowned prison journalist (and now a free man), describes in his recent memoir In the Place of Justice the “bone-cold loneliness” of life in solitary confinement on Angola’s death row.

He describes solidarity as being: “Removed from family or anything resembling a friend, and just being there, with no purpose or meaning to my life, cramped in a cage smaller than an American bathroom. The lonesomeness was only increased by the constant cacophony of men in adjacent cells hurling shouted insults, curses, and arguments – not to mention the occasional urine or faeces concoction. Deprivation of both physical exercise and meaningful social interaction were so severe … that some men went mad while others feigned lunacy in order to get transferred to the hospital for the criminally insane.”

On occasion, prisoners facing the possibility of a lifetime in solitary have asked judges to sentence them to death instead.

Europe vs. the US

In Europe, solitary confinement has largely been abandoned, and it is widely viewed as a form of cruel, inhuman and degrading treatment, in violation of international human rights conventions.

Recently, four British nationals who face terrorism charges successfully delayed their extradition to the US by arguing in the European Court of Human Rights that they would face life in a federal supermax prison.

But American courts and politicians have, for the most part, failed to take a strong stand against solitary confinement. There are signs, however, that the consensus may be shifting in the US.

In Colorado, which holds more than 1,500 prisoners in long-term isolation, a bill was recently introduced in the state legislature to curb the use of solitary.

The legislation would significantly limit the isolation of prisoners with mental illness or developmental disabilities, and would demand that prisoners be reintegrated into the general prison population before their release. In addition, it emphasises what the American Civil Liberties Union (ACLU) – which is strongly supporting the bill – called “the staggering cost of using solitary confinement, rather than mental or behavioural health alternatives, as the default placement without regard to medical needs, institutional security or prisoner and public safety”.

A similar bill introduced in the Maine state legislature last year ended with legislators agreeing to “study” the issue further, and legislation on solitary confinement is being floated in New Mexico as well. At the same time, cases have been brought before federal courts in both Louisiana and Colorado, challenging on constitutional grounds the decades-long solitary confinement of several of the nation’s most isolated prisoners.

At the same time, the ACLU’s David Fathi believes that a combination of legislation and litigation, grassroots activism and investigative journalism are producing “a breakthrough in public awareness”.

If this is true, it may at least bring this form of “no-touch torture” out of the shadows of the prison walls and into the light of the public square.

James Ridgeway is a senior Washington correspondent with Mother Jones Magazine. He is the author of 16 books and has also worked for the New York Times Magazine, The Economist, Harper’s, The Nation and the Village Voice.

Jean Casella is a freelance writer and co-editor of Solitary Watch. 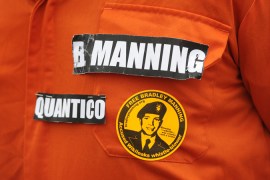 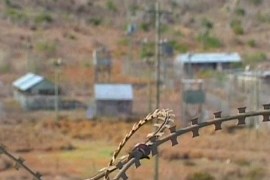 US president turns back on promise to close prison within year after taking office. 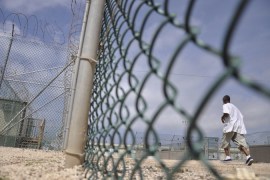 US to resume Guantanamo trials

US president lifts two-year ban on controversial military tribunals as he acknowledges the prison will not close soon. 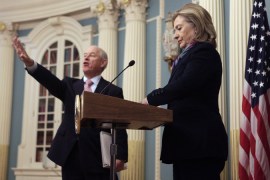 US state department spokesman resigns after calling Pentagon ‘stupid’ over treatment of soldier accused over WikiLeaks.