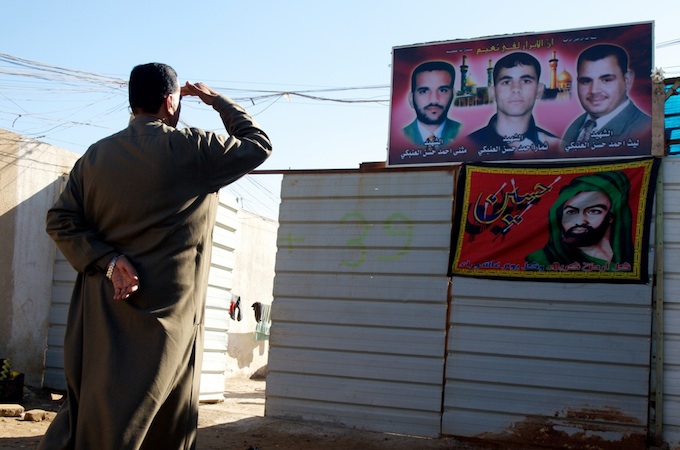 Baghdad, Iraq – The legacy of the Iraq war for Ahmed Hassan can be reduced to a single image, the faded photograph of his three dead sons, all of them killed by armed groups, which hangs above the cramped trailer he and his family now call home.

All three were killed within a span of six months. Muthanna, a doctor, and Thamar, a professional volleyball player, were both shot in the head; Laith, a police officer, was assassinated by a roadside bomb planted near his car.

He blames his neighbours in Diyala province, an ethnically and religiously mixed area which became a stronghold of al-Qaeda in Iraq in 2006.

“The ones I was sitting with day and night, my friends, they are the ones who killed my sons,” Hassan, a Shia Muslim, said bitterly. “My neighbours told al-Qaeda about us.”

Their murders forced the family to flee their home; they wound up here, in a camp for displaced people in Ur, on the outskirts of northern Baghdad. The camp’s residents crowd into dozens of converted shipping containers, not unlike those once used by the US military on their bases here. Garbage litters the dirt roads; smells of cooking and sewage mingle in open doorways. A tangle of wires overhead provides the camp with intermittent electricity.

The other residents here, like Hassan, are Shia; they fled their homes in neighbourhoods which are now largely Sunni, places like Diyala and Abu Ghraib, some as far back as 2006. Few of them expect to return.

“It’s impossible. There is no chance. If they gave me gold and silver for the house that was destroyed, I would not go back,” Hassan said. “Al-Qaeda is still there, and they would kill me.”

‘Many of them were my friends’

More than one million Iraqis are internally displaced, according to the United Nations High Commissioner for Refugees. Not all of them wound up in camps; many found new homes or moved in with relatives in safer areas.

The divisions in Iraq are not just personal: Nearly half of Iraq’s 18 provinces have either declared semi-autonomy from the government in Baghdad or are planning such a split in the near future.

Three provinces already fall under the Kurdistan Regional Government, and four others – Anbar, Basra, Diyala, and Salah al-Din – are in various stages of declaring their own autonomy from the central government.

But nearly 500,000 of them live inside Iraq in “squatter settlements” on abandoned lots, where they enjoy no property rights and few basic services, according to the International Rescue Committee. Some have received modest payments (around $1,800) from the governments to buy new homes, but many others have seen no benefits.

The residents in Ur are slightly luckier than most, because they at least have permanent shelters, a fact that is little consolation to the 750 people living here.

“We need to find a solution, a place for us to live, instead of this camp,” said Shukri Jabbar, who fled to the camp in Ur in 2006 after militants burned down his shop in Adhamiyah. “These containers, during the summer they are unbearable, and in the winter they are colder than ice.”

“But we hear only slogans from the government,” he said.

The displacement in Iraq has created a new sectarian geography, as once-mixed areas have slowly become more homogenous. The Iraqi government does not have detailed statistics about this internal migration, but visits to neighbourhoods in Baghdad show how the city has changed.

Ghazaliya, a neighbourhood in western Baghdad, has long been majority Sunni, but residents here say there was also a sizeable Shia population before the war, including a large number of educated professionals. “Many of them were my friends,” said Udai Akram, 62, an engineer who lives in Ghazaliya.

That changed in 2006, as the neighbourhod became an epicentre for fighting between Sunni militants and the Mahdi Army, the militia created by Moqtada al-Sadr. Many buildings are still pockmarked with bullet holes. Residents point to empty fields where Sunni militants would dump mutilated bodies.

Hundreds of Shia families fled Ghazaliya, and residents say they were replaced by militants who fuelled the fighting in the neighbourhood.

“Many Shia were displaced, they left their homes unfortunately, [and] the ones who replaced our Shia brothers were not good, they were unpleasant characters,” Akram said. “You would sense evil coming from their eyes.”

‘Nobody can go back’

A kilometre or so down the road is the Shia neighbourhood of Shu’ala. There is no sign to mark the boundary, but the differences are clear: Black flags hoisted on streetlights to commemorate Muharram, when Shia mourn the death of Hussein at the battle of Karbala; posters depicting Moqtada al-Sadr and his father, Mohammad, who was killed in 1999 by Saddam Hussein’s security forces.

The neighbourhood has calmed down since 2006, when it was a base for many of the militiamen who fought in Ghazaliya. A new market has opened which sells meat and produce; residents say people from neighbouring areas sometimes come to shop. Several Sunni families have returned.

“The problem was not between us and Ghazaliya,” said Hamid al-Saidi, a barber. “There were people who infiltrated Ghazaliya, and they forced them, they created hot spots there.”

The question now for many Iraqis is whether the relative calm of the last few years can be sustained. Many of those who did not flee their homes – like the current residents of Ghazaliya and Shu’ala – think their neighbours will return home. “We are all brothers, we are all Muslims,” said Abu Alaa, a farmer in Shu’ala. 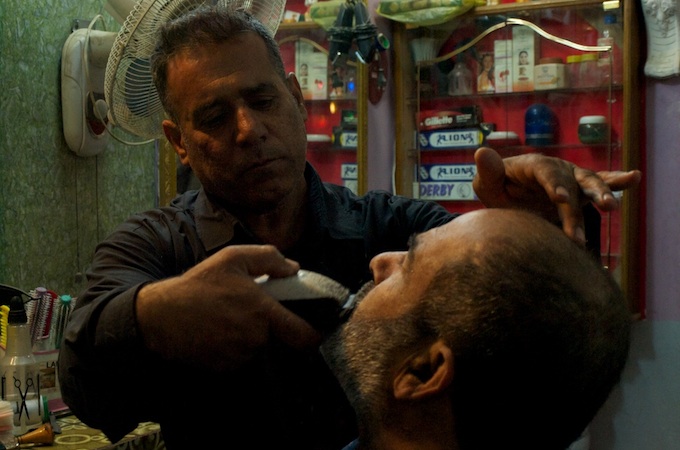 Another resident of the neighbourhood, Hassan Ismail, blamed the US for the sectarian fighting. “Everything that happened to us is because of the occupation. The Iraqi people are peaceful and we are brothers,” he said.

“It is better now,” said Mushira Ibrahim, 43, an accountant in Ghazaliya. “It is calm and we have nothing [no problems].”

Mehdia Abed Hassan, an employee with the Baghdad governorate who arranged a visit to the camp in Ur, said she was optimistic that Iraq could move past its divisions. “I think Iraqis want to live together as one society. We are all children of Adam,” she said.

But not all Iraqis are so ecumenical, particularly those who were displaced by the fighting. “We are Iraqis, united by one flag, one history, but groups came in from outside and drove us apart,” said Jabbar, the merchant whose Adhamiyah shop was torched.

Umm Muthanna, one of Ahmed Hassan’s wives and the mother of his three slain sons, said there was no chance she would return to Diyala. “They are my enemies now, and if I see them, I would tear them apart, I would burn them with my own hands,” she said, referring to her former neighbours.

“We have no heart for anyone in the area where we used to live.”