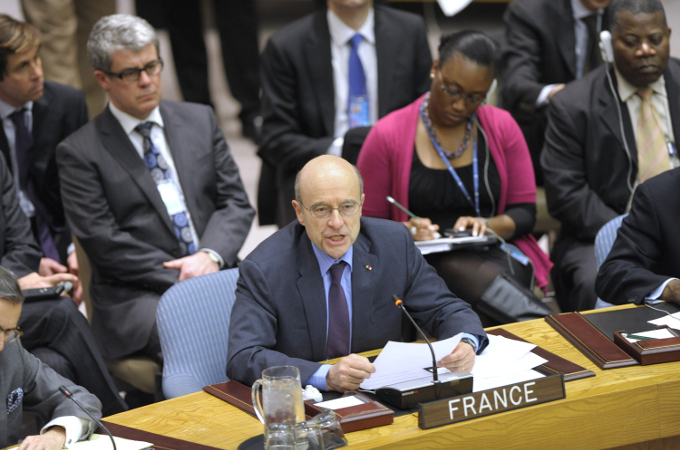 The “responsibility to protect” concept, a justification for the no-fly zone in Libya, remains a controversial idea [EPA]

While the Western-led military coalition in Libya continues to debate the exact goals of its offensive there, a broader discussion is playing out in some foreign capitals: did the United Nations even have the authority to authorise the action?

Supporters of the no-fly zone over Libya like to call it a humanitarian operation, and argue that days of sorties – mostly by American, British and French planes – have prevented wider civilian casualties. Refugees International, for example, praised the no-fly zone as “international intervention to protect the people of Libya.”

Critics have reached exactly the opposite conclusion: The Chinese government said on Tuesday that the no-fly zone would lead to a “humanitarian disaster,” and warned against “causing even more civilian casualties through the use of armed force.” (China was one of five UN Security Council members to abstain from voting on resolution 1973, which authorised the no-fly zone and bombing campaign.)

The R2P concept rose to prominence largely because of the genocides in Bosnia, Rwanda and Darfur. It became something of an official UN position in 2005, when hundreds of heads of state publicly endorsed the idea at a meeting of the General Assembly in New York.

And it was explicitly invoked in resolution 1973, which declared a core goal of “protect[ing] civilians and civilian populated areas under threat of attack.”

The resolution is based on chapter VII of the United Nations charter, which gives the Security Council wide-ranging authority to identify and stop “threats to the peace” and “acts of aggression.” Chapter VII has been used to justify a variety of UN actions in the past, including those in Somalia, Sierra Leone and Afghanistan. But experts say this is the first time it has been explicitly used in the context of protecting civilians.

“The explicit invocation of R2P within a chapter VII resolution is a significant, perhaps even historic breakthrough in our stated commitment to end mass atrocities,” said Jonas Claes, a scholar at the Washington-based US Institute of Peace.

One of the most prominent advocates for R2P, US academic Samantha Power, is also a senior member of Barack Obama’s national security council.

“Every human being’s rights now have claim on international responsibility and protection,” Power wrote in a 2006 book, Realizing Human Rights. “No country can now say that the human rights of any human being subject to its jurisdiction is no one else’s business.”

The R2P concept considers military intervention a last resort, something to be used only after diplomatic measures fail. Advocates of the no-fly zone in Libya say it has met that requirement: international condemnation did not stop Libyan leader Muammar Gaddafi, nor did economic sanctions on high-level government officials.

… or a dangerous precedent?

But are Libya’s internal problems an international issue to begin with? Critics say no: Turkish prime minister Recep Tayyip Erdogan, for example, said earlier this week that “we want Libya to resolve its internal matters without foreign intervention.”

Gaddafi’s offensive against the rebels in eastern Libya has undoubtedly killed civilians – and he has vowed to go “house to house,” killing protesters – but critics say Libya’s civil war is ultimately a Libyan issue, and that the “responsibility to protect” goes too far in giving powerful countries a mandate to intervene in the affairs of others.

They are quick to point out that the R2P concept is applied selectively. Gaddafi’s crimes against his own people were apparently enough to justify international intervention, but the leaders of Yemen and Bahrain – both of whom have ordered brutal crackdowns on peaceful protesters – face no such threat.

The R2P concept is also abstract enough to cover, and legitimise, a range of military interventions. Consider Saddam Hussein, whose ghastly human rights record includes the use of chemical weapons against his own people. Proponents of the American war in Iraq could have argued that toppling Hussein was an effort to “protect civilians.”

It has done no such thing, of course; more than 100,000 civilians have been killed since the invasion, according to classified US military records. But R2P could nonetheless be used as a justification for “regime change”; indeed, the British foreign office said yesterday, the ultimate goal in Libya is a country “not run by Gaddafi,” an objective that seemingly goes beyond the mandate of simply protecting civilian life.

Those criticisms aside, though, some of the harshest critics of the Libya campaign could also be accused of acting out of self-interest. Turkish prime minister Recep Tayyip Erdogan and Russian prime minister Vladimir Putin both condemned the airstrikes, the former calling it a bid to seize Libya’s oil reserves, the latter likening it to the Crusades.

It’s unclear, one week in, whether the campaign in Libya will oust Gaddafi or simply enforce a stalemate. Equally unclear is whether it will set a precedent for future interventions.