When asked whether they think the talks will succeed, some Israelis respond with a cynical laugh, but most reply with an odd mix of apathy, exhaustion and pessimism, coloured by hope.

Ronen is a 32-year-old attorney who asked to be identified by a pseudonym rather than being associated with “an Arab media outlet”. Like many Israelis, he is not following this round of talks closely because negotiations have failed in the past.

“Everyone is bringing up stupid conditions that make everything impossible,” he says. “For example, Israelis [say] that they’re going to build up the settlements. But, once more, they “sacrifice”, he says sarcastically, “because it won’t be as much construction as intended”.

There are also challenges from “the other side,” he says. “Palestinians still claim the right of return [to land inside Israel] which is as stupid as building the settlements.”

Ronen feels that neither the Palestinian nor Israeli leadership truly wants to negotiate. He compares the talks to theatre, staged to please the US government. “It’s like the Americans are the parents and each of us wants the parents to like us.”

The “worthless” talks will not bring change to the Middle East, he says – a massive war with Iran and its proxies will.

But there is a bright spot in his gloomy outlook. “It’s an improvement because they’re talking. I’m still hoping to be surprised,” he says, echoing the sentiment of many Israelis.

“I just want to go to work and make some money; go home and watch some TV. I wouldn’t be surprised if things are the same on the other side.”

Yaakov, the elderly owner of a second-hand store, is a rare optimist. “I believe that [the talks] will succeed because everyone understands that there is no choice. It’s impossible to go on like this, one war after another. Everyone’s tired. Enough,” he says in Hebrew with a heavy Arabic accent.

Born in Syria, Yaakov immigrated to Israel with his family when he was 12 years old. Although 60 years have passed, he remembers his school and his friends well. What about his mother tongue? Yaakov tips his kippahed head up and replies, “I speak excellent Arabic.”

“If there will be peace,” he adds with a smile, “I’ll go straight to Damascus.” There, he will visit his childhood home in the Jewish quarter.

One of the biggest obstacles to his journey, he says, is the settlers. “But if the government decides to evacuate them, that’s it,” he says, wiping one hand with the other. “Done.”

Yaakov is also troubled by Palestinian infighting. “Hamas and Fatah – they’re not together. This is a problem,” he says.

He questions the wisdom of excluding Hamas from talks. A handful of interviewees expressed the same concern; some cast doubts upon Palestinian Authority President Mahmoud Abbas’ legitimacy as a representative of the Palestinian people.

Still, Yaakov believes that the US goal of reaching a framework agreement within a year is realistic.

But what if talks fail? Is this, as many say, the last chance for a two-state solution?

“There won’t be one state. It’s impossible. It’s got to be ‘two states for two people’,” Yaakov says, reciting that long-held mantra.

“Netanyahu isn’t serious about peace,” she explains. “In the end, there will be one country and [Jews] will be the minority.”

While Negev does not think this is a problem in and of itself – she is one of the very few that dreams of building a shared Jewish-Palestinian state “without an army” – she doubts that the people will want to make it work.

Similarly, she feels that both sides lack the will to compromise during the talks. “There are things [the Israelis and Palestinians] won’t agree to. No one’s ready to meet in the middle.”

Negev, of Russian extract, feels that the settlements and Jerusalem are the most important issues. She is concerned, for example, about what is happening in Sheikh Jarrah – a Palestinian neighbourhood in East Jerusalem that is being taken over by Jewish settlers.

Does she attend the weekly protests there?

On the one hand, Negev feels her government will not do anything for peace; on the other, she is too frightened to.

She shrugs and laughs nervously.

“Why didn’t Arafat take it?” Julie Ozon says, referring to the offer made by Ehud Barak, the former Israeli prime minister, at Camp David in 2000. “We could have had peace. It’s a pity.”

Ozon feels that, as was the case in the past, current talks will also end in failure. But things are different this time. “This is the last chance,” she says.

Ozon, a 68-year-old restaurant owner and chef who serves dishes from her native Egypt, cites the same problem as almost every other interviewee. “The settlers are really a problem,” she says.

Although she is right-wing herself, she points to Israel’s general shift towards the right as another concern. “There are the extreme rightists,” she says. “And now there is [Binyamin Netanyahu, the Israeli prime minister]. He is very hard.”

Not only is his support of settlements worrisome to Ozon, his attitude towards the Palestinians is too.

“Something annoying about Bibi is that he wants the Palestinians to recognise the Jewish state on the land of Israel. After peace, they’ll do it. But not now,” she says. “Arabs have honour.”

“You want to annoy an Arab?” asks Ozon, who, six decades after immigrating to Israel, still identifies as Egyptian. “Take his land and then tell him what to call it.” She throws her hands up in frustration, her bangles jingling.

“On the other side,” she continues, “Hamas will exploit this. They don’t want peace. They want war. They want to kill Jews.”

Ozon feels that this sentiment is common throughout the neighbouring countries. Arab children, she says, “are taught to hate”.

“Do you know how many states are against us?” she adds. “If we don’t find a solution now, no one will be able to help us. Not the US, not Europe. They are 300 million,” she says, repeating the number.

While Ozon hopes for peace – “I want to be in my state; leave me in quiet, ya Allah,” she says – she predicts that talks will fail because of the settlers.

What will happen then? 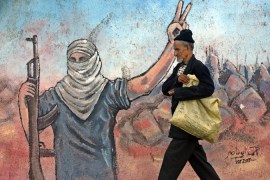 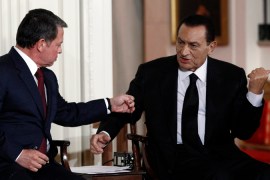 Can the Arab ‘peace troika’ of Saudi Arabia, Jordan and Egypt, produce an Arab solution to regional peace and security? 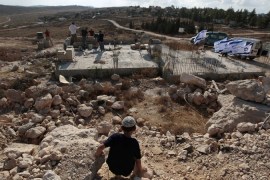 Clinton: Time is ripe for peace

Israeli construction of settlements on Palestinian land remains a flashpoint as Clinton arrives in Egypt for talks. 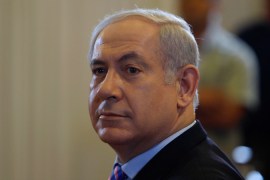 Israeli premier’s familiar dilemma: Catering to his right-wing base in Israel at the cost of raising international ire.