Walt Disney Co edged past Netflix Inc with a total of 221 million streaming customers and announced it will increase prices for customers who want to watch Disney+ or Hulu without commercials.

The media giant will raise the monthly cost of Disney+ without advertising by 38 percent to $10.99 in December, when it begins to offer a new option that includes advertisements for the current price.

Shares of Disney rose 6.9 percent in after-hours trading to $120.15 on Wednesday.

Disney in 2017 staked its future on building a streaming service to rival Netflix as audiences moved to online viewing from traditional cable and broadcast television.

Five years later, Disney has edged past Netflix in total streaming customers. The Mouse House added 14.4 million Disney+ customers, beating the consensus of 10 million expected by analysts polled by FactSet, as it released Star Wars series Obi-Wan Kenobi and Marvel’s Ms Marvel. Combined with Hulu and ESPN+, Disney said it had 221.1 million streaming subscribers at the end of the June quarter. Netflix said it had 220.7 million streaming subscribers.

Current Disney+ subscribers will begin receiving the advertisement-supported version unless they agree to pay more for the commercial-free plan.

To help attract new customers, Disney will offer an advertisement-supported version starting on December 8 for $7.99 a month, the same price it now charges for the commercial-free version, the company said. The introduction of an advertisement-supported tier is meant to boost subscribers and generate more revenue by giving customers options for how much they want to pay for the service. Prices for Hulu will rise by $1 to $2 per month in December depending on the plan. 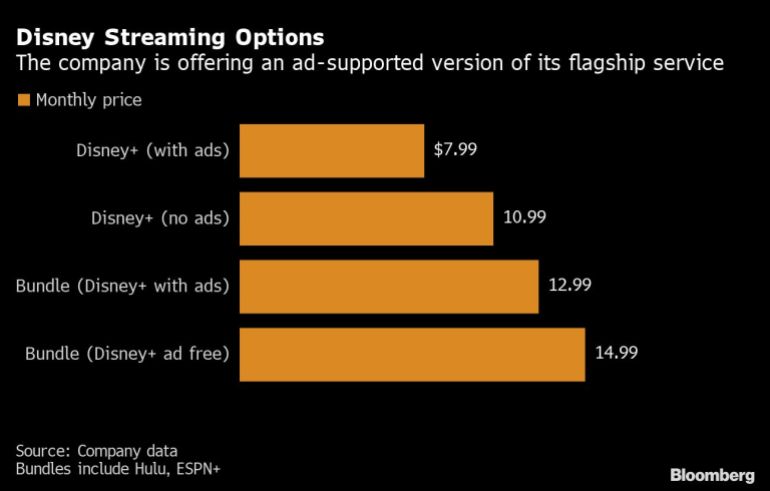 Disney said last month it sold $9bn of advertisements for the upcoming TV season, with 40 percent of that going to its online offerings.

The company lowered its long-term subscriber forecast for Disney+ customers on Wednesday, blaming the loss of cricket rights in India.

Disney now projects between 215 million and 245 million total Disney+ customers by the end of September 2024. That is down from the 230-260 million which Disney had been forecasting.

The adjustment came from reduced expectations for India, where the company is losing streaming rights for Indian Premier League cricket matches.

For after-hours first time, Disney broke out estimates for Disney+ Hotstar customers in India from the rest of Disney+.

Chief Financial Officer Christine McCarthy said Disney expected to add up to 80 million Disney+ Hotstar customers by September 2024, and between 135 million and 165 million others.

The company still expects its streaming TV unit to turn a profit in fiscal 2024, McCarthy said. In the most recent quarter, the division lost $1.1bn.

For the fiscal third quarter ended July 2, Disney posted adjusted earnings per share of $1.09, up 36 percent from a year earlier, as visitors packed its theme parks. Analysts polled by Refinitiv had expected earnings of 96 cents. Operating income more than doubled at the parks, experiences and products division to $3.6bn.

Streaming losses put a drag on the media and entertainment unit, whose profit declined by 32 percent to nearly $1.4bn. Overall revenue rose 26 percent from a year earlier to $21.5bn, ahead of the analyst consensus of $20.96bn.