US employers added more jobs in June than forecast and the unemployment rate held near a five-decade low, suggesting hiring needs are so far eclipsing concerns about the economic outlook.

Nonfarm payrolls rose 372,000 last month following a revised 384,000 in May, a Labor Department report showed Friday. The unemployment rate held at 3.6% as the pool of available workers shrank, and wage growth remained firm.

The unexpected strength in hiring bucked forecasts for a slowdown and underscores the stark contrast between the resilience of the jobs market and fears of a recession. At the same time, the data will likely keep Federal Reserve policy makers set on raising interest rates aggressively to curb red-hot inflation by reducing demand among households and businesses. 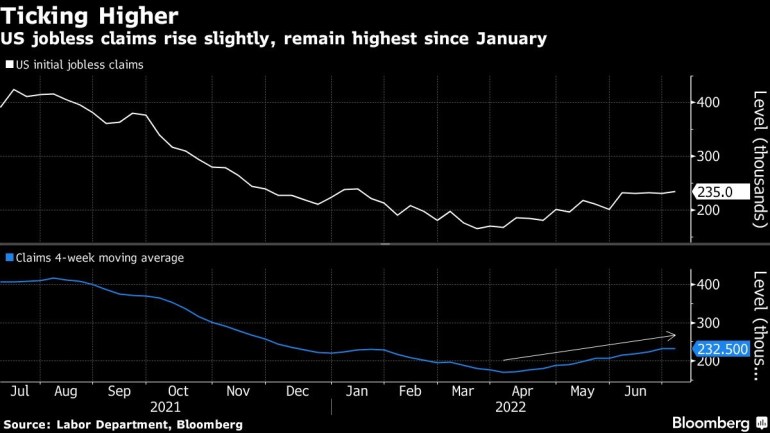 A drop in the participation rate corroborates many complaints about worker shortages and an inability for employers to fill millions of open positions — a recipe for sustained wage pressures. While a number of companies did announce plans in June to cut staffing levels, layoffs have so far been largely concentrated in technology and interest-rate sensitive sectors like housing.

Treasury yields surged, US stock futures fell and the dollar index gained as markets extended bets on steep Fed interest-rate hikes. Swaps traders increased to about 96% the probability of the Fed lifting rates this month by 75 basis points from about 93% before the data.

The labor force participation rate — the share of the population that is working or looking for work — slipped to 62.2%, and the rate for workers ages 25-54 declined to a four-month low of 82.3%. The number of Americans not in the labor force rose by about half a million to the highest level this year.

Friday’s report showed that average hourly earnings rose 0.3% from the prior month, in line with projections. Earnings advanced by a still-elevated 5.1% from a year earlier after an upwardly revised 5.3% gain in May.

For months, employers have been bidding up wages to attract and retain workers, but in the aggregate, pay is still falling short of rapidly increasing prices. While the Fed would welcome a cooling in wage pressures as they seek to limit inflation, a marked slowing in earnings at a time when prices are still extremely high would further curb consumers’ ability to keep spending.

Inflation is now at a 40-year high and broad-based. Costs have ballooned at grocery stores and gas stations, contributing to President Joe Biden’s dismal approval ratings just months before the November mid-term elections. The Fed has committed to fighting inflation, but concerns are rising the central bank may ultimately tip the economy into recession in the process.

The median estimate in a Bloomberg survey of economists called for a 265,000 advance in payrolls and for the unemployment rate to hold at 3.6%.