United States retail stocks were lower Tuesday, dragged down by an earnings warning from retail giant Walmart and fresh US data showing that consumer confidence fell in July to its lowest level since February 2021. The latest signals are stirring concerns that the economy may be headed towards a recession.

Walmart shares dropped nearly 9 percent after the mega-retailer cut its profit outlook for the second quarter and the full year, underscoring that rising prices for food and gas are forcing shoppers to cut back on items such as clothing that carry higher profit margins.

Shares of automaker General Motors (GM) also fell sharply, after the company announced that its second-quarter profit dropped 40 percent compared to a year ago. Computer chip and parts shortages have clobbered factory output and drove the company’s US sales down more than 15 percent.

GM, based in Detroit, earned $1.67bn from April through June, a stark contrast to the $2.79bn it made a year earlier. The company said it was unable to deliver nearly 100,000 cars during the quarter because it lacked parts.

Fresh US data on Tuesday also showed just how much American shoppers’ sentiment has fallen, with the Consumer Confidence Index decreasing for a third month to 95.7 from a downwardly revised 98.4 reading in June. That’s the lowest reading since February 2021. 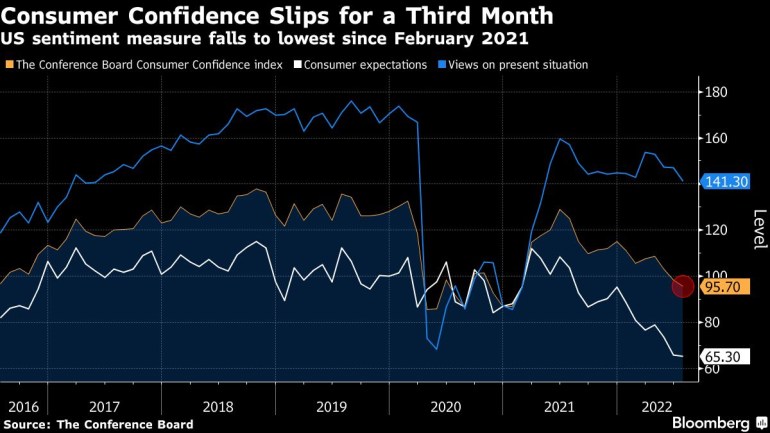 All eyes are now on the Federal Reserve, the US central bank, which is expected to announce a rate hike of up to three-quarters of a percentage point on Wednesday. The Fed is waging an aggressive fight against four-decade-high inflation – which jumped to 9.1 percent in June.

The US economy may be slowing, but hiring remains strong, US Treasury Secretary Janet Yellen said Sunday on NBC News’s Meet the Press programme. Fed officials who are in support of a rate hike also point to a robust jobs market as evidence that the economy can withstand tighter monetary policy.

Late on Monday, Walmart, the world’s largest retailer, downgraded its profit outlook in the middle of the quarter, something it rarely does. The retail giant said that inflation and high food and fuel costs are causing shoppers to slow down on spending. The warning from the industry bellwether may be seen as a prediction of what’s to come for the wider retail sector.

In May, Walmart, Target and other retailers said that consumers were shifting and changing their shopping habits. Items that were made popular during the peak of the coronavirus pandemic – such as casual clothing and home goods – were no longer hot items, they said. A surplus of inventory caused big-box retailers to slash prices.

The stocks of major chains, including Target, Macy’s and Kohl’s, also fell following Walmart’s announcement. Target’s stock was down 4.8 percent in midday trading. Amazon was down 4.51 percent.

E-commerce company Shopify dropped 15 percent after announcing its plans to lay off 10 percent or 1,000 employees of its workforce due to a post-pandemic slowdown in business.

There’s still plenty to watch for this week, especially in tech: Apple, Meta, Microsoft and Amazon are due to report earnings.