Officials at the US foreign aid agency reacted with alarm to news of a controversial security pact between China and the Solomon Islands, describing the agreement as “very troubling” and “unfortunate”, newly released internal emails show.

The emails, obtained by Al Jazeera via a freedom of information request, reveal how officials at the United States Agency for International Development (USAID) scrambled to respond to reports earlier this year that Beijing was seeking to bolster security ties with the tiny Pacific Island nation.

The Chinese and Solomon Islands governments formally signed the contentious pact in mid-April, despite concerns raised by the US, Australia and New Zealand, which fear the establishment of a Chinese military base in the strategically-located archipelago, the site of some of the fiercest fighting in World War II.

Beijing and Honiara have both denied any intention to establish a military base through the pact, a leaked draft of which allowed visits by Chinese warships and the deployment of Chinese police at Honiara’s request to maintain “social order”.

In an email reacting to a New York Times article about the proposed pact sent on March 28, Ryan Washburn, USAID mission director to the Philippines, Pacific Islands and Mongolia, expressed alarm about the agreement.

“Yikes! This is very troubling,” he said in an email to colleagues.

“Yes. Very troubling,” Regina MacKenzie, then USAID acting deputy director to the Pacific, replied in an email. “We’re working on a related tasker for Craig [Craig Hart, acting senior deputy assistant administrator for Asia] now. It should come to the FO later today.” 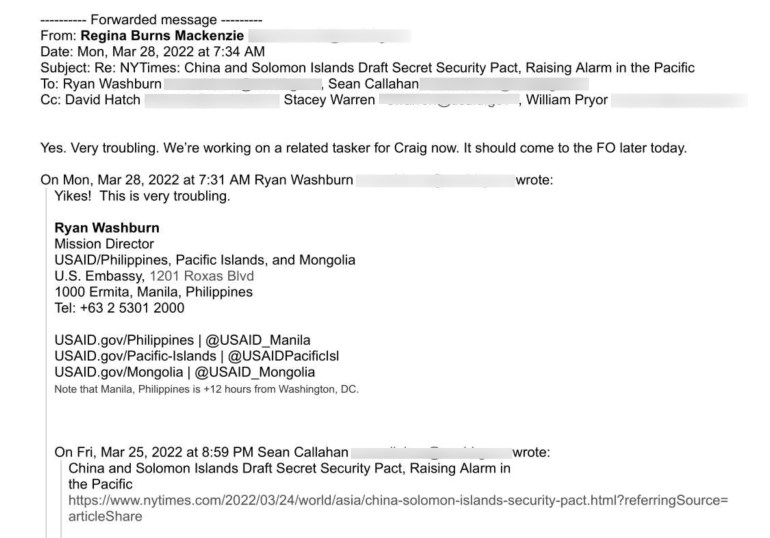 After China and the Solomon Islands proceeded with signing the pact the following month, USAID officials again expressed concern.

In an email sent on April 20, Sean Callahan, regional coordinator for Pacific Islands and Mongolia, likened the news of the pact to the Solomon Islands’s decision in 2019 to sever diplomatic ties with Taiwan in favour of China, which refuses to conduct formal diplomatic relations with countries that recognise Taipei.

“Yes it is deja vu all over again and we had to scramble when the switch happened right before the UNGA [United Nations General Assembly] in September 2019,” Callahan said. “The press and academia in Canberra and Wellington are making those same comparisons from 2019, too, referring that again we got ‘played’ by the PM.”

In a separate email thread on April 19, Callahan noted that some observers on social media believed the signing of the pact was deliberately carried out before the arrival of a bipartisan delegation of US legislators to the archipelago.

“Twitter lit up last night on this with the Australian audience, with some noting it was signed yesterday and done intentionally before the USG [US government] delegation was to arrive in Honiara,” he said.

“I did see that mentioned that the PRC MFA [Chinese Ministry of Foreign Affairs] announced it but not sure if this was accurate.”

USAID did not respond to a request for comment from Al Jazeera.

Kurt Campbell, a top national security official for Asia, said the Biden administration would announce plans for a “very detailed set of engagements” with countries in the region this week.

The initiative comes after China in May failed to secure agreement for a sweeping trade and security pact with 10 Pacific Island states that would have dramatically increased its influence in the region.

Tess Newton Cain, project lead for the Pacific Hub at the Griffith Asia Institute in Brisbane, Australia, said Washington’s moves to ramp up engagement with Pacific Island states come after years of being “largely absent”.

“In Solomon Islands, there has been a long, drawn-out process towards implementing an MCC project which would likely have a big impact – the one in Vanuatu certainly did – but seems to be taking forever to get going,” Newton Cain added, referring to the Millennium Challenge Corporation, a US aid agency that operates independently of USAID and the US State Department.

“However, that is not to say that if these things had been in place that the security agreement would not have been signed. I think the main drivers for this are domestic and are largely fuelled by domestic politics.”