Driven by soaring energy and food costs, data released Monday showed consumer prices in the continent’s biggest economy jumped 8.7% from a year ago in May. Analysts surveyed by Bloomberg predicted an 8.1% advance. 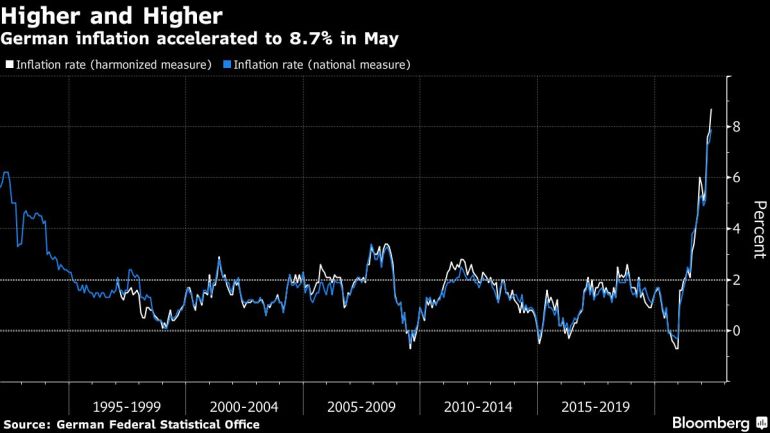 The report comes just 10 days before a crucial ECB meeting where officials are set to announce the conclusion of large-scale asset purchases and confirm plans to raise interest rates in July for the first time in more than a decade. Some policy makers have even floated the idea of a half-point hike, rather than the quarter-point most of them support.

The inflation figures increase pressure on the government as households are further squeezed. Finance Minister Christian Lindner earlier Monday called the fight against surging prices the “top priority” while advocating an end to expansive fiscal policy.

“Inflation is an enormous economic risk,” Lindner told a news conference in Berlin. “We must fight it so that no economic crisis results and a spiral takes hold in which inflation feeds off itself.”

While inflation is now near its peak, the squeeze for households is far from over, according to ZEW Economist Friedrich Heinemann.

“Consumers will have to reckon with further increases in prices because many inputs are still scarce and wholesale prices are still increasing dramatically,” he said by email. “Surprisingly good labor-market data also indicate that the dreaded wage-price spiral could soon pick up speed.”

The ECB’s decisions in June will be guided by fresh economic projections that are likely to show price pressures in the euro area as a whole remaining above the 2% target in 2023 and 2024. Data for May from the 19-member currency bloc are due on Tuesday.

Highlighting the persistent dangers, Spain earlier Monday reported an unexpected acceleration in inflation to a record 8.5%, despite government assistance including a fuel subsidy and an increase in the minimum wage. A Belgian measure also quickened.

In Germany, the lower house of parliament has passed a package of relief measures that includes a one-time payment, a child supplement and a reduction in electricity costs. Chancellor Olaf Scholz has signaled further action may be taken if needed to protect households and businesses.

Negotiated wages in Germany fell by 1.8% in real terms in the first quarter, and even though workers in the iron and steel industry are pushing for gains of more than 8%, they’re unlikely to secure gains that fully offsetting the rising cost of living.