By Paul Burkhardt and Grant SmithBloomberg

Oil climbed to a two-month high as China eased anti-virus lockdowns and the EU worked on a plan to ban imports of Russian crude.

Brent crude rose above $120 a barrel, building on last week’s 6% rally, to reach the highest intraday level since late March. China’s key commercial hub of Shanghai allowed all manufacturers to resume operations from June, while officials said Beijing’s coronavirus outbreak is under control. 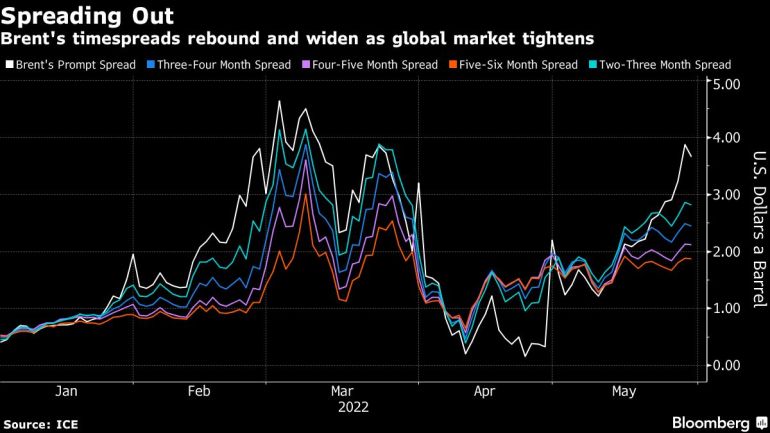 European Union leaders intend to reach a political agreement today on an embargo on Russian oil to punish Moscow for its invasion of Ukraine, according to an official who spoke on condition of anonymity. The bloc failed on Sunday to agree on a revised sanctions package. Hungary is so far refusing to back a compromise despite proposals aimed at ensuring its oil supplies.

Brent crude is on course for a sixth straight monthly climb that would be the longest such run in more than a decade. The advance has been driven by the fallout from the war in Ukraine, as well as increased demand as more economies return from Covid-related restrictions. In the US, the summer driving season kicked off at the weekend with retail gasoline prices at a record.

“It’s tight supply – China demand and beginning of US driving season in focus,” said Ole Hansen, head of commodities strategy at Saxo Bank A/S. At the same time OPEC+ has fallen behind production targets and is struggling to meet quotas.

China’s dogged adherence to its Covid Zero policy at all costs — epitomized by Shanghai’s lockdown that began in late March — have sapped energy demand, and an easing would help to support global consumption. Administration officials have both warned of the economic damage stemming from the curbs, and pledged support to offset the impact.

With a meeting due this week of the Organization of Petroleum Exporting Countries and allies on supply policy, leading member Saudi Arabia is expected to boost its official July prices. Saudi Aramco may raise Arab Light for sales to Asia next month by $1.50 a barrel, a Bloomberg survey showed.

The oil market is steeply backwardated, a bullish pattern marked by near-term prices trading at a premium to longer-dated ones. Brent’s prompt spread — the difference between its two nearest contracts — was $3.71 a barrel on Monday, up from $1.34 a barrel three weeks ago.

The surge in energy prices has contributed to a sharp pick-up in the pace of inflation, spurring central bankers to move toward tighter monetary policy. Data this week will likely show record price gains in European economies.

–With assistance from Sharon Cho.