US consumer sentiment declined in early May to the lowest since 2011 as persistent concerns over inflation dimmed Americans’ views on the economy.

The University of Michigan’s sentiment index fell to 59.1 from 65.2 in April, data released Friday showed. The figure was lower than all estimates in a Bloomberg survey of economists, which called for a median reading of 64. 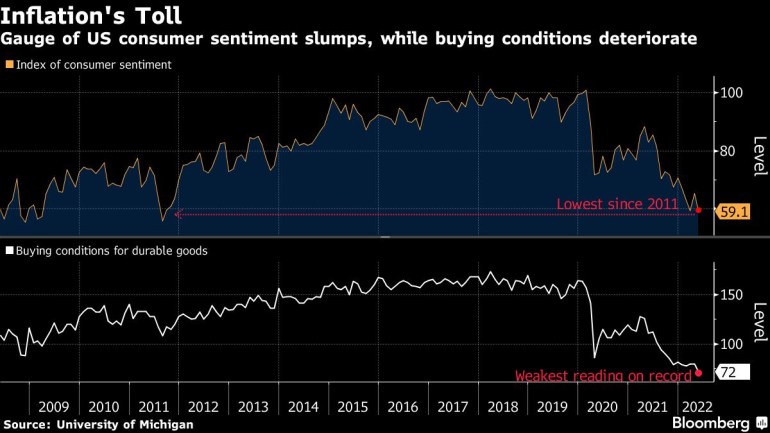 A gauge of current conditions dropped to 63.6, the lowest in 13 years, while a measure of future expectations declined 6.2 points, erasing most of April’s gains.

“Inflation remains on the forefront of consumers’ minds,” Joanne Hsu, director of the survey, said in a statement. “They mentioned inflation throughout the survey, whether the questions referred to their own personal financial situations, their outlook for the economy, or buying conditions.”

Americans’ view of their current financial situation compared to a year ago is at its lowest reading since 2013, Hsu said. Nearly half of respondents don’t expect their incomes to keep pace with inflation over the next 12 months.

Consumer prices rose 8.3% in April from a year ago – a slight moderation from the prior month, but still among the fastest rates in decades, government data showed earlier this week. Friday’s report showed a measure of buying conditions for durable goods, such as household appliances, fell to the lowest level since the university began asking the question in 1978.

Meantime, gas prices have jumped to new highs in recent weeks, and borrowing costs for home and student loans are on the rise as the Federal Reserve hikes interest rates to rein in price pressures. That’s weighing on stocks, which are trading around the lowest level in a year.

Still, Americans have benefited from a strong labor market as record job openings fuel higher wages. Even in the face of intense price pressures, consumer spending has so far proved resilient.

–With assistance from Vince Golle.