By Joanna Ossinger and Sidhartha ShuklaBloomberg

Bitcoin extended this month’s losses in Monday trade as investors shied away from risk assets amid a more hawkish outlook for Federal Reserve policy tightening.

Dogecoin jumped as much as 7.4% amid reports that long-time backer Elon Musk is close to reaching an agreement to buy Twitter Inc. Last year Musk took to promoting Dogecoin, a meme-coin made as a parody of cryptocurrencies, which help inflate the value of the token over 14,000% from the start of 2021 to a high of $0.68 per token in May 2021. Earlier in January, Musk announced on Twitter that Dogecoin can be used to buy Tesla Inc. merchandise. 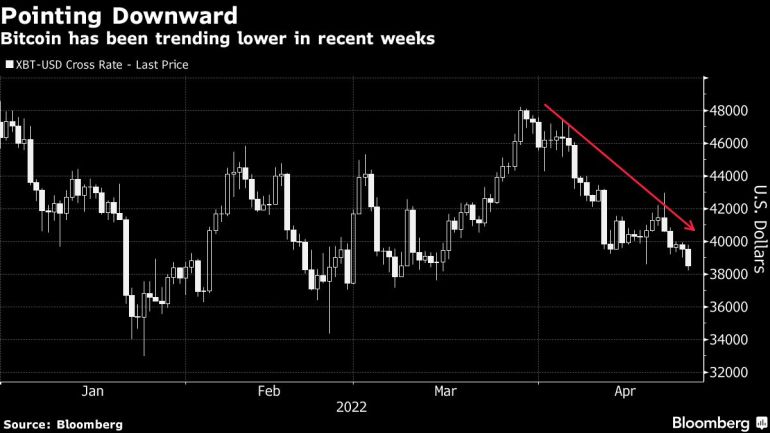 Price charts are signaling further declines are likely, technical analysts say. Bitcoin has dropped below its Ichimoku cloud support on a weekly chart, with secondary support only coming in around $27,200, said Katie Stockton, founder and managing partner at Fairlead Strategies. She isn’t alone in seeing more downside.

“Bitcoin looks to be breaking a pivotal minor two-month trend on Friday’s pullback that likely causes weakness down to test January lows,” Mark Newton, a technical strategist at Fundstrat, wrote in a research note Friday. He expects an initial pullback to $36,300, “but breaks of that level should lead to a full retest of $32,950 without too much trouble.”

For all its recent losses, Bitcoin remains in the middle of a trading range that has held since the start of the year, between about $35,000 to $45,000. The digital currency moves strongly in line with the tech-heavy Nasdaq 100, and is negatively correlated with the dollar.

With the Fed expected to hike rates in 50 basis-point steps in coming months to combat inflation, some of the factors that fueled cryptocurrencies’ stellar gains in the past couple of years are going into reverse. 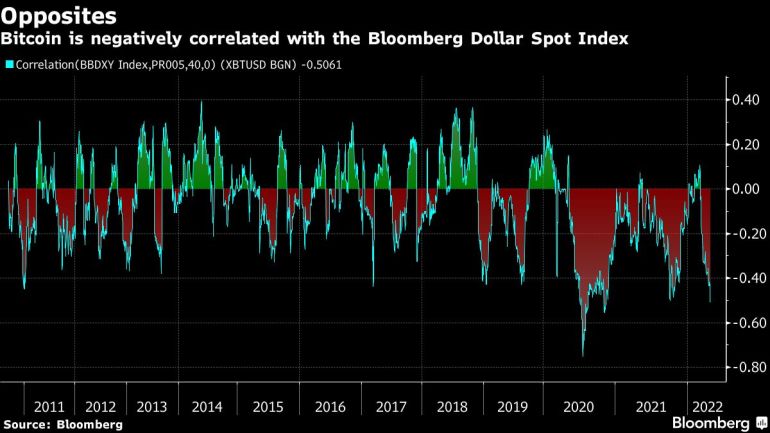 Bitcoin will still be mainly driven by fundamental factors, such as user growth and network usage, but it’s important to understand the evolving macro relationships, they said.