Stocks fell, while the dollar climbed with bonds as concerns that war risks are intensifying roiled global markets. Oil topped $115 a barrel on news the U.S. is considering a ban on imports of Russian crude for its invasion of Ukraine.

The S&P 500 dropped for the fourth time in five days, with commodities having their biggest weekly surge since 1974 as Russia’s growing isolation is choking off a major source of materials — sparking fears of prolonged shortages and accelerating inflation. The White House is assessing if an oil ban would actually hurt the Russian economy or if crude would simply go to other markets and drive up gasoline prices. The greenback hit the highest since 2020 while 10-year yields slumped to about 1.7%. Europe’s common currency approached a key support level that goes back to the euro’s inception in 1999.

S&P Dow Jones Indices will remove Russian stocks from its gauges, joining other global index compilers in shunning the nation. Three major Russia-focused ETFs were halted on Friday after the New York Stock Exchange took action based on what it said was “regulatory concern.” A top nuclear official called for talks with Russia and Ukraine after the government in Kyiv said Vladimir Putin’s troops triggered a blaze at Europe’s largest atomic power complex in a shelling attack. Economists at JPMorgan Chase & Co. said the war could hurt Russia’s economy as much as its devastating 1998 default.

Oil could reach $150 a barrel in the next three months if Russian crude continues to be largely shunned, said Damien Courvalin, head of energy research at Goldman Sachs Group Inc. Higher commodity prices have the potential to depress growth and stoke inflation, creating a dilemma for central bankers worldwide as they weigh the need to increase borrowing costs against the risk of stunting the economic recovery.

Jerome Powell’s push to limit the Federal Reserve’s liftoff this month to a quarter percentage point was bolstered by unexpectedly stagnant wages amid strong hiring seen in February’s jobs report. While employers added 678,000 to payrolls and unemployment fell to 3.8%, average hourly earnings were little changed from January. That suggests central bankers aren’t facing an immediate wage-price spiral similar to the 1970s — which reduces the urgency to take bolder steps toward curbing inflation. 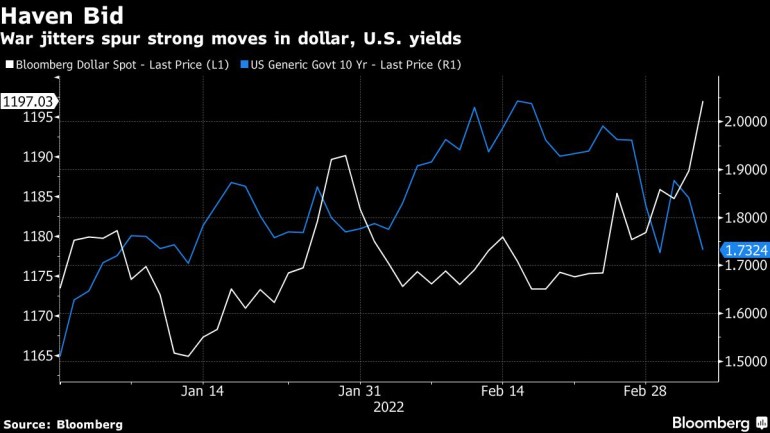